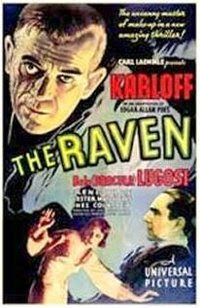 Actors Bela Lugosi and Boris Karloff are definitely two of the most easily recognizable names in the history of the horror genre, and not without a reason, as their iconic performances as the title characters in Universal Studios' 1931 classics, "Dracula" and "Frankenstein" respectively, truly added a lot of power to those legendary films and transformed them into stars. Given the attraction both actors had on the audiences, the obvious next step was to put them together in another horror film and the result was 1934's masterpiece, "The Black Cat", a classic film inspired by the works of writer Edgar Allan Poe that became the first of eight movies where the two legends would share the screen. The following year, Universal gave young serial director Lew Landers the job of making another Poe-inspired horror film with the two legends.

Contrary to what the title may imply, "The Raven" is not an adaptation of Poe's classic poem, but the story of a man obsessed with the legendary writer. That man is Dr. Richard Vollin (Bela Lugosi), a neurosurgeon of enormous talents who one night is called out of retirement by the wealthy judge Thatcher (Samuel S. Hinds), who wants Vollin to operate his daughter, a famous dancer named Jean Thatcher (Irene Ware) who suffered brain damage after a terrible auto wreck. Vollin reluctantly accepts and miraculously saves the girl's life, but after Jean's recovery he discovers that he is now in love with the dancer. Sadly, Jean rejects him in favor of her fianceé, Dr. Jerry Holden (Lester Matthews), and this event makes Vollin to decide to take revenge on the Thatchers. To achieve this, Vollin will use an escaped convict named Edmond Bateman (Boris Karloff) to do the dirty work.

Written by David Boehm (with Universal's assortment of usual collaborators), "The Raven" is a dark tale of revenge that, while having a plot completely different to the poem that inspired it, effectively manages to keep the themes of obsession and insanity so characteristic of the classic poem. Boehm's screenplay is actually quite fascinating, as by focusing entirely in the villains it manages to develop a complex psychology for the characters played by Lugosi and Karloff. As in "The Black Cat", the development of their characters is exceptional (specially considering the film's short runtime), and the movie features some of the best dialog exchanges in a Universal horror film. Vollin's obsessive fascination with Poe and torture devices is explored extensively in the script, resulting in a very dark and violent film, in the spirit of 1932's "Murders in the Rue Morgue" (also starring Lugosi).

Director Lew Landers takes a very restrained and straightforward approach to the story, as if he was limiting himself to simply shoot what is on the script. While his work with the film isn't really bad in the strict sense of the word, it is certainly bland and a bit uninspired, as at times he fails to capture the dark atmosphere of the story and leaves the film as nothing more than a typical horror of those years. Despite this uneven work of direction, Landers manages to create some interesting scenes that thanks to the excellent cinematography by Charles J. Stumar (in one of his last works before dying in a plane crash), seem to deliver some of the spirit of Boehm's creepy tale. While his camera-work is a bit average, his dealing with actors is without faults, as Landers truly gets the best out of his cast.

Bela Lugosi's talent for acting has always been questioned given the poor choices of roles he made when his health got worse and became type-casted as a villain. However, "The Raven" is an irrefutable proof that the legendary horror icon could be perfect in the adequate role. As the sadistic Dr. Vollin, Lugosi's talent shines without problem and manages to overshadow everyone in the cast, including his usual "rival" Boris Karloff (himself another very talented actor). As the dangerous criminal Edmond Bateman, Karloff is very effective despite his somewhat limited screen time, and he manages to be both frightening and sympathetic. Character actor Samuel S. Hinds delivers his usual good work as Judge Thatcher, and Irene Ware is equally delightful as Jean. Lester Matthews is probably the weakest link, but to his favor I can say that his character was terribly underdeveloped.

It's a true shame that Lew Landers' hadn't taken Boehm's story to its full potential, as easily the movie could had been as good as the previous year's "The Black Cat"; however, this could be blamed on Landers' lack of experience in this kind of movies, as his style shows a lot of the influence he got by directing serials ("The Raven" was his first feature film). Anyways, as written above, this shouldn't be seen as a bad thing, just a slight criticism on the missed chance to create a horror masterpiece out of this script. Still, this is no reason to dismiss this film as Lugosi's performance in the movie is certainly something to be seen, as it ranks as one of his best along his work in "White Zombie", "The Mystery of the Marie Celeste" and the aforementioned movie, "The Black Cat".

While nowhere near the better known classics by Universal, "The Raven" still manages to capture a bit of that magic that made those early sound horror films an unforgettable landmark in the history of horror. It's kind of sad that Lugosi's career started its slow downfall in the years after this movie, as this 30s classics show the enormous talent that was in the person of the iconic Hungarian actor. Despite not being faithful to Poe's work, with this film one can agree with Dr. Vollin's words: "Poe, you are avenged". Avenged indeed.