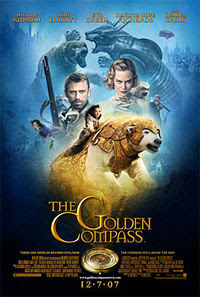 Ever since first published in 1995, "Northern Lights", the first novel in the "His Dark Materials" series by British writer Philip Pullman, became a very popular fantasy novel, not only among young readers, but also among the adult population, earning several prestigious literary awards around the world. However, the "His Dark Materials" series of books also became the subject of controversy among fundamentalist Christians, who see in the book an attack to their beliefs, and a propagandistic tool for atheism. Controversies aside, the popularity of the "His Dark Materials" series piqued the interest of New Line Cinema after the success of "The Lord of the Rings" in 2002, and now, 5 years later, a film adaptation of the first book in the series is now a reality, under the title of "The Golden Compass" (as it's known in America) and director Chris Weitz at the helm.

"The Golden Compass" is the story of Lyra Belaqua (Dakota Blue Richards), a young girl living at the University of Oxford, in a parallel universe to our own, similar but different, where life is ruled by the omnipresent organization known as the Magisterium, and the soul resides outside the body in the form of an animal called a "dæmon". One day, she hears her uncle Lord Asriel's (Daniel Craig) announcement to the College that he has discovered the existence of parallel worlds. This investigation goes against the Magisterium dogma, and immediately he is considered an heretic. Lord Asriel decides to travel to the north pole to continue his experiments, but when Lyra's best friend Roger (Ben Walker) is kidnapped by the mysterious Gobblers, she decides to go to the north too, beginning an adventure that will take her to meet armored bears, and discover a powerful secret.

Adapted to the screen by director Chris Weitz himself, "The Golden Compass" is essentially, an introduction to the universe of "His Dark Materials" and the beginning of Lyra's heroic journey. However, fans of the book should not expect a direct adaptation of the novel, as Weitz took several noticeable liberties with the plot, some done in order to make the story cinematic, some done with the idea of toning down the religious allusions that Pullman uses in his novel. While with this changes Weitz certainly sacrificed substantial parts of the story, he still manages to make an interesting and intriguing plot, that certainly makes one to know more about this parallel world and its ultimately fate. As the focus is completely on Lyra, there isn't a lot of character development for most of the supporting characters, and that's something that brings the film down a bit.

As he is better known for his work in comedies ("American Pie" and "About a Boy" for example), it was hard to think of Chris Weitz as a director of Pullman's epic fantasy, however, in this aspect his work truly shines. While his script isn't really up to the expectations, his visual design and overall vision for the movie is simply flawless. With an excellent work of cinematography (by Henry Braham) and art design, Weitz makes Pullman's work come to life in a grandiose fashion, and gives every scene a very special, almost ethereal touch. The work done by the special effects team is also remarkable, specially in the creation of the armored polar bears and naturally, the Dæmons themselves. Another element that's worth to point out is Weitz' work with his cast, as he manages to bring out excellent performances that work nicely despite his weak screenplay.

And it is the work done by the cast what practically rescues "The Golden Compass" from being just another fantasy film and bring hope that maybe the next film (if there's one) may be better. Young Dakota Blue Richards is certainly a brilliant discovery, as she brings to her role a charming rebellious attitude that works perfectly with her clever and witty character. In this her first work she shows a lot of promise and hopefully she'll realize her potential in her following films. The rest of the cast is excellent, despite the lack of development of their characters. Nicole Kidman is perfect as the cold and enigmatic Mrs. Coulter, and Sam Elliott shines as the charming Aeronaut Lee Scresby. As the voice of Iorek Byrnison, the armored bear, Ian McKellen is perfect, giving his character a fully developed personality that makes him stand out.

Now, while the cast's performances are excellent and Weitz' directing is honestly impressive, what definitely brings the film down is the way Weitz fleshed out his adaptation. As written above, Weitz took a lot of liberties with the story, in an attempt to make the complexities of the plot a bit easier to get by the mainstream audiences, but by doing this he turned Pullman's original epic into a fairly typical fantasy adventure. I'm not saying that he betrayed the novel's plot, but the way Weitz has developed the story makes clichéd what otherwise would be fresh and original, as Weitz transforms the novel's sequence of events into one that follows the pattern of classic series of films (like "Star Wars"). To make things worse, several of the changes done, while probably unnoticeable for most people, will definitely be disliked by fans of Pullman's book.

This last thing is probably what will damage the film more, as in the it's the target audience whom ultimately will give the film a good or bad word of mouth. However, I would still recommend "The Golden Compass", as despite the liberties taken with the source novel, it's still an entertaining film that keeps that sense of adventure the novel has. Personally, I would like to see what Weitz has prepared for the second installment, but his disregard for the fans may make a second part inviable. Despite it's shortcomings, "The Golden Compass" it's still a very good movie, although probably not the fantasy film of the year.

"...also became the subject of controversy among fundamentalist Christians, who see in the book an attack to their beliefs, and a propagandistic tool for atheism".

Hmm...That sounds strange. So, what do you think? Is the film really 'attacking Christian beliefs'?

Personally I didn't see it as an attack to the Christian beliefs, I saw it more as a criticism to organized religion, mainly the Catholic Church.