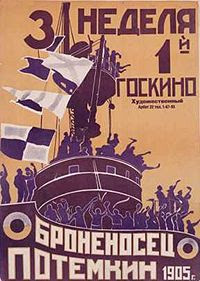 Very few people in the history of the cinema have left an imprint as deep as Sergei M. Eisenstein, Russian director and film theorist whose ideas about montage changed film editing (and film-making itself) forever. As one of the first to discover the potential of the artistic manipulation of film in order to transmit emotions, Eisenstein transformed film editing from simple chronological cuts to a more expressive language. His third movie, "Bronenosets Potyomkin" ("Battleship Potemkin" in English), is definitely his most famous work and the flagship of the montage theory, as it was in this movie where he was able to fully explore the ideas he had developed initially in "Stachka" ("Strike), his first feature. Many has been written about "Battleship Potemkin", and not without a reason, as this movie lives up to its status of classic like no other.

"Battleship Potemkin" is the dramatization of a real life story, the uprising of the Potemkin's crew against their officers in June 1905. The story begins when in the Potemkin, sailor Grigory Vakulinchuk (Aleksandr Antonov) and his mates discover that the meat destined for their consumption is rotten and filled with maggots. The sailors protest, but the officers state that the meat is in fact in good conditions and that the sailors will have to eat it. These statements increase the rage of the sailors, who that night refuse to eat the rotten meat, defying their superiors in a blatant display of protest. The next day, the Potemkin's officers decide to execute those who defied their orders, and it's at that moment when sailor Vakulinchuk decides to call for a rebellion. The consequences of the Battleship Potemkin uprising will be enormous, and the first place that feels them is the small city of Odessa.

While the movie was co-written by Eisenstein and three of his collaborators, "Battleship Potemkin" is completely Eisenstein's brainchild, as he devised the movie as an experiment about the effects of his editing technique on the audience. The desired effect was that the audience felt completely identified with the revolutionaries and their cause, while at the same time had feelings of antipathy and rejection to the czar's army, arguably the film's "villians". While this may sound like a very simplistic approach to the story, it is really the perfect devise to Eisenstein's highly visual style of film-making, as what matters in the film are not the characters, but the events happening. Despite being a fictional account of the real life event, Eisenstein's script captures the spirit of the uprising and the ideologies behind it (after all, it was conceived as revolutionary propaganda) in a quite powerful way.

Obviously, Eisenstein's direction is the true star of the movie, as he shows his mastery, not only of montage, but also of cinematography (by Eduard Tisse and Vladimir Popov) and overall visual composition, which give the movie a nearly poetic majesty. It is often said that movies with good narrative should be able to tell its story without sound, and "Battleship Potemkin" proves that statement true with its near perfect visual storytelling that without problems (and with very few inter-titles) transmits its message to the audience. Another interesting trait of the film is how despite the manipulative montage, it feels incredibly realistic, almost as if it was a documentary on the subject. The now legendary Odessa Steps sequence, a monumental achievement in film-making, is done in a tremendously realistic fashion that, as critic Roger Ebert points out, "is often referred to as if it really happened".

To achieve this atmosphere of realism, Eisenstein often used untrained people (and even members of his crew) to play basically themselves in his movies, and "Potemkin" is not an exception, as to most of the actors on screen this meant their only participation in movies. A notable exception is the man playing the movie's most important role, Aleksandr Antonov, who plays rebel sailor Vakulinchuk. Antonov had his debut in Eisenstein's first movie Dnevnik Glumova, and went on to have a relatively prolific career during the following decades. As Vakulinchuk, his performance is quite powerful and very natural, capturing with ease the traits of the legendary rebel and transforming him into a myth. On a side note, directors Vladimir Barsky and Grigori Aleksandrov (Eisenstein's close collaborator) appear in the movie in the roles of the battleship's evil officers.

More than 80 years after its initial release, one can still say that Eisenstein's experiment was an enormous improvement in film editing techniques, and more than that, it was probably the final step to complete the transformation of film into an art form. While the use of film editing to create emotions was of course done with the purpose of using the films as revolutionary propaganda, the use of images and symbolism to create emotions in the audience is hardly objectionable and one could say that it was even necessary for movie to be the expressive art form that is today. Due to all those reasons, "Battleship Potemkin" is without a doubt one of the most important movies ever made, and one that even today manage to bring great emotions from its audiences, as its universal message of freedom is certainly more powerful than any political ideology.

An obligatory entry in almost every book on the history of cinema, "Battleship Potemkin" is a movie that even today, more than 80 years after its conception, keeps being not only a thrilling an entertaining story, but also as fresh and influential as when it was originally released. Some would accuse it of being manipulative propaganda, and while they are probably right, in the end, what film is not manipulative?

Now that's a masterpiece. And one rare instance where you actually gave a film a 10 out of 10!

I saw it for the first time some 2 years ago in some art cinema, which was crowded with people! And we all were fascinated by the film.