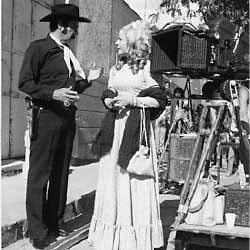 One of the most famous figures of Mexican cinema was without a doubt Antonio Aguilar, a very popular singer of northern Mexican folk music (like Corridos) whom after debuting on the big screen in 1952, would become the star of many Westerns of the singing cowboy variety. Unfortunately, most of his movies wouldn't be of the the level of quality that had the ones starring other famous singing cowboys like Pedro Infante or Luis Aguilar (no relation), as Antonio's career started when the Golden Age of Mexican cinema was reaching its end and the industry was facing serious problems. Despite this, it could be said that Antonio Aguilar's movies kept the Mexican Western alive in the difficult decades of the 60s and 70s, as he adapted his singing cowboy style to the rawer grittier Westerns of those decades. However, this mix wasn't always smooth, as 1977's "Sabor a Sangre" proves.

In "Sabor a Sangre" (literally, "Flavor of Blood"), Antonio Aguilar plays Mauricio Rosales, whom along his good friend Chelelo (Eleazar García) are traveling towards another friend's ranch. During their trip, they find the dead bodies of a group of men, so they take them to the next town hoping to find some answers. At the town, they are informed that the dead men were a posse sent by police chief Rómulo (José Gálvez) to kill "El Tigre", a mysterious serial killer who has been hunting down the townspeople, viciously killing even women and children. Mauricio and Chelelo decide to stay in town to help the chief hunt El Tigre and put an end to the killings, but as they get involved, they discover that the horror brought by El Tigre is related to a secret incident part of the town's dark past. And to make things worse, the questions they begin to ask begin to win them enemies on their own side.

Written by Jorge Patiño (based on a story by the film's director, Mario Hernández), "Sabor a Sangre" is yet another variation of the classic Western storyline of a stranger (two strangers in this case) arriving to a town in order to help the townspeople to solve a problem. What makes the movie different from other Westerns is the way it depicts the killer's actions, as everything about him is kept completely secret for about two thirds of the story, making El Tigre akin to the serial killers in horror films (and the way Hernández shots the film enhances this aspect), with identity and motives hidden to both the characters and the audience. While the movie has a dark theme as the background (that gets darker as secrets are unveiled), it follows the conventions of typical Mexican musical Westerns, which means that many songs are included as well as a good dose of comic relief.

As written above, director Mario Hernández enhances the horror elements of the story by using a clever device to kept El Tigre a mystery: all his actions are shot from a first person point of view, similar to what John Carpenter would do the following year in his classic "Halloween". However, while Carpenter would use this for suspense, Hernández uses it for mystery, with the purpose of showing first hand the violence and brutality of this mysterious killer. Hernández uses a raw and very gritty style (cinematography by Agustín Lara Alvarado) which although probably the result of budgetary constrains, fits nicely the violent nature of the movie. While Hernández brings excellent performances from his cast, it's obvious that he can't handle the mix of musical and serious drama, as the film moves from one genre to another with the subtlety of a sledgehammer.

As usual, Antonio Aguilar is very good in his performance as the smart Mauricio, whom is more prone to use his wits than his fists to win a battle. As expected, his singing is also excellent, although the movie made me think that he was a better actor than what his roles tended to demand him. As his carefree friend Chelelo, Eleazar García is effective, and together with Aguilar has some good comedy moments, although others not as effective. José Galvez has a very interesting role as the mysterious police officer, and he definitely makes the most of it, but the actor that really steals the show is Rubén Aguirre as the town's priest. Better known for his comedy roles (with Chespirito for example), Aguirre shows in this movie a great talent for drama as well. Flor Silvestre (Antonio's real life wife) has a small role but it's clear that she appears in the film only because of her singing.

"Sabor a Sangre" would be one of the best and most interesting mixes of horror and western done in Mexico if it wasn't for the fact that the inclusion of songs feel terribly forced and out of place. In fact, I would say that if the songs were changed for more character development, the movie would be perfect. Don't get me wrong, I enjoy singing cowboy films and Aguilar and Silvestre did have an enormous talent for singing, but the story of "Sabor a Sangre" is just too dark, violent and gritty for this kind of Western, as the musical segments (mostly Mexican folk ballads) do break the pace in a very awkward way despite the high quality of the singers. Still, when the movie moves away from the songs and focuses on the mystery, it does work nicely and even the comedy by Chelelo (and comedian "Chicote" in a brief role) fits nicely in a movie that seems taken from a pulp novel.

It's obvious that being an Aguilar vehicle, singing would be an intrinsic part of the movie, but for once I hoped the movie focused on the action and not in the songs, as behind its flaws, there is a good movie to see here. "Sabor a Sangre" may not be a very well remembered Western (not even in its country of origin), but it's actually one of Aguilar's most interesting movies (despite its obvious shortcomings). It's not exactly a great movie, but in it one can see how Mexican cinema was evolving during the hard years of the 70s, and how Aguilar's persona helped to take the Mexican Western through those days.

Buy "Sabor a Sangre" (1977) and other Mexican Horror films

In the picture, Antonio Aguilar and Marina Dorel preparing themselves to shoot a scene of "Sabor a Sangre" (1977). I couldn't find the original poster art.
Posted by J Luis Rivera at 11:41
Labels: 1970s, Horror, Mexican Cinema, Musical, Mystery, Reviews, Western

"What makes the movie different from other Westerns is the way it depicts the killer's actions, as everything about him is kept completely secret for about two thirds of the story, making El Tigre akin to the serial killers in horror films"

That sounds interesting. Not to mention the use of songs and singing: finding a musical western is a real rarity!

Yeah, it's a very interesting, albeit flawed mix. The first person POV it uses was quite well done.

Sadly, I just noticed that the DVD that Amazon sells has no subtitles, so I guess this movie will remain unknown for a while...