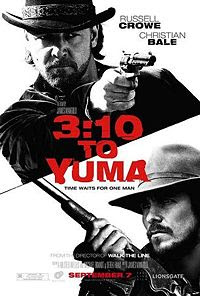 The early 90s brought a revival of the Western film genre, with two remarkable movies achieving both critical and commercial success after their release. "Dances with Wolves" in 1990 and "Unforgiven" two years later returned the attention to a genre that seemed death after being almost in silence since the late 70s. However, the revival just didn't happen, and while there several good movies were done after them, the old American genre remained dormant for a few more years. Until the 21st century, in which the Western seems to be back with a vengeance, with more filmmakers returning to the mythic genre to keep the flame alight. From Australia came "The Proposition" in 2005, later Tommy Lee Jones gave the genre a contemporary spin in "The Three Burials of Melquiades Estrada", and in 2007 director James Mangold resurrects an old classic story in the remake of 1957's "3:10 to Yuma".

The film tells the story of Dan Evans (Christian Bale), a Civil War veteran struggling to survive with his wife and two sons as his ranch suffers from the severe drought of the time. Overwhelmed by debts, the threat of losing his ranch, and most importantly, the poor personal image he has in front of his family, Evans decides to be one of the escorts that'll take notorious criminal Ben Wade (Russell Crowe) to the 3:10 to Yuma train for a reward of $200. But the journey to the train will be a difficult one for Evans, as not only there's the threat of being attacked by Wade's gang and also renegade Indians, Evans will have to face his inner demons as Wade represents for him everything that's opposite to him, and a battle of wills between the rancher and the outlaw will take place. To make things complicated, Evans' oldest son William (Logan Lerman) joins the group against his father's wishes.

With a screenplay by Michael Brandt and Derek Haas, "3:10 to Yuma" has its basis on Halsted Welles' original screenplay, which was in turn based on a short story by Elmore Leonard. Like the original, this incarnation of "3:10 to Yuma" is at is core, a psychological drama in which two men battle each other mentally, confronting their ideas of morality, success, and basically, what is in the end what truly makes a man. There's a good amount of character development in the film, specially in what respects to Dan Evans, as it is his journey what will ultimately define for him the true nature of heroism, as he sees the mission as his chance to prove himself worthy for the first time. While mainly a character study, there's also a good deal of action in this movie, bringing back the thrilling suspense and sense of adventure of the Western genre, and despite some plot contrivances here and there, the script is pretty solid in this aspect.

Director James Mangold makes an efficient job in making the story come alive, and literally resurrects the genre's conventions, adapting them to the modern style of film-making. Mangold's remake of "3:10 to Yuma" is probably not the most original Wester ever made, but it successfully updates a classic without betraying its roots or making any concession. It is clear that Mangold knew that the strongest side of the screenplay was its characters, so he brings the best out of his two leads and puts the psychological battle between them in the spotlight. There are many moments where this interaction results in great scenes. Sadly, I can't say the same of his directing of action scenes, which seems kind of uninspired sometimes, and overdone at others, although several set pieces are of excellent quality. Still, Phedon Papamichael's cinematography and Marco Beltrami's awesome score help Mangold to recapture that epic feeling of classic Westerns of old.

When a movie works as a character study, the performances of the actors tend to make or break the film, and fortunately, "3:10 to Yuma" is a movie in which the acting doesn't disappoint. Bale and Crowe are outstanding as the two enemies, with Bale being the highlight as he makes an excellent job as the insecure rancher Evans. Evans is a complex character, and Bale completely owns his character and becomes very believable as a man who feels internally as broken as he is externally. As the charming, yet ruthless Ben Wade, Crowe is excellent, although it must be said that his role is considerably less complex than Bale's. Crowe delivers a very natural acting as a man who simply enjoys being the way he wants, without thinking too much about his fellow men. The rest of the cast is very good, specially Ben Foster as Wade's second in command, a role that could had been easily an unremarkable one but that gets transformed into gold by his excellent performance.

All in all "3:10 to Yuma" is a very solid Western film that brings back the best of what made the genre a great way to tell stories: it offers thrilling action and adventure, yet at the same time it showcases deeper emotional and intellectual themes. It's both a "shoot 'em up" and a psychological drama (with some traces of 1952 "High Noon") at the same time, and while not without its flaws, it definitely succeeds at both. As written above, I think that the action scenes are the downside of the film, as personally I found they lacked the power the movie has during the drama scenes and became just a showcase of special effects and clever set pieces (very well done, but kind of void). The screenplay also loses steam in those scenes, as often it requires more than the usual suspension of disbelief to fully accept what's going on. I guess that it could be said that Mangold's forte is on the drama scenes, not on the action ones.

"3:10 to Yuma" may not be of the level of the legendary Western classics of old, but it's certainly an excellent movie that seems to recapture the essence of the genre as its not only entertaining on an emotional level, but also on an intellectual one. Granted, it has its fair share of flaws that definitely bring down the movie a bit, but in all fairness, that's almost unnoticeable, as it's a very engaging tale. While not exactly a perfect film, it'll hopefully will help to put the genre on the spotlight again (this and Moll's "The Assassination of Jesse James by the Coward Robert Ford" are two very interesting 2007 Westerns that may do the trick). Only time will tell if the Western genre rides again. In the mean time, "3:10 to Yuma" is a very good choice to get started.

I didn't care too much for 3:10 to Yuma, myself. By the time it got to the part of the film that was actually based on Elmore Leonard (the part in the hotel room and afterwards), it had already begun to strain my credibility. When it got to the last ten minutes of film, it jumped the rails entirely. I would say that it doesn't earn the ending honestly, but I can't imagine how any film could have earned that ending.

But that's just me.