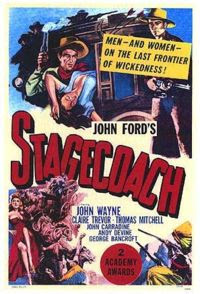 By 1939, John Ford was already a established director who had gone from making countless B-Movies of the Westen genre during the early decades of cinema, to direct very effective and successful A-Movies through the 30s. It was at this point in his career when, at the age of 45 years old, Ford returned to the genre of his earlier films with "Stagecoach", his first Western since his silent classic "3 Bad Men", and not only meant a revolution of his own style (that very same year he would also direct three other gems: "Drums Along the Mohawk", "Young Mr. Lincoln" and "The Grapes of Wrath"), it was also a turning point for the Western genre, as pretty much as he had done previously with "The Iron Horse" in 1924, Ford took the genre once again to the level of art, and proved once again that Westerns were more than silly shoot'em up stories of cowboys and Indians. With "Stagecoach" Ford not only introduced a new way to make Westerns, he also introduced the world to one of the most enduring icons of cinema: John Wayne.

"Stagecoach" is essentially the tale of a simple stagecoach trip across the dangerous lands where Geronimo and his Apache warriors are preparing for War against the U.S. Army. The travelers inside the stagecoach include a young woman (Louise Platt) hoping to reunite with his husband, who is a member of the Cavalry, a whiskey salesman (Donald Meek), a moody banker (Berton Churchill), and four persons of "bad reputation": a gambler (John Carradine), a drunk doctor (Thomas Mitchell), a prostitute (Claire Trevor) and the infamous outlaw Ringo (John Wayne). Together with the driver (Andy Devine) and the Marshall (George Bancroft) watching over the stagecoach (and checking on Ringo), the odd group will find themselves not only worried about the apaches, but also about the clash of their personalities as well. During their dangerous trip, the group will face numerous problems, but the most important thing is that they'll face their own secrets, inner demons and prejudices.

While virtually a mix of road movie and Western, what makes the plot of the movie (written by Dudley Nichols) really interesting is the way he plays with the characters and their relationships. Adapted from Ernest Haycox's story "Stage to Lordsburg", the film plays heavily with the theme of morality and hypocrisy, as inside the stagecoach are characters of every "social class", but everyone has some kind of secret. It has been stated that Haycox based his story in another interesting study of morality and hypocrisy, the story "Boule De Suif" by Guy De Maupassant, translating the story to a Western setting and toning down the story's heavy handed use of the themes. Of course, "Stagecoach" still retains many of the elements of the typical Western of its time, but yet, it shows that like Ford, writer Dudley Nichols was decided to make "Stagecoach" something more than another Western by adding a considerable amount of character driven drama.

As written above, it is in this movie when finally the "Ford style for Westerns" is born, as he takes the genre to the level of art by his excellent use of cinematography (by Bert Glennon) to capture for the first time in his career, the amazing landscapes of Mountain Valley. However, this extraordinary use of wide shots is not the only remarkable feature of Ford's directing, together with Glennon he gives new and original uses for the camera with a great eye for the use of light and shadows. "Stagecoach" is a very atmospheric movie, as the story requires a great amount of tension between the characters and their environment and Glennon's expert cinematography plays a key role to achieve that effect. While books could be (and have been) written about Ford's visual style, it's worth to point out that specifically this film is very character driven, and Fords proves to be up to this challenge with great control and superb storytelling skill.

After building a 10 years long career as a star of B-Movie westerns, John Wayne finally proved that he could be a real Hollywood star with his remarkable performance as Ringo Kid in this film. Granted, Wayne never had a big acting range, but this film shows what he could do when provided with a great script. Claire Trevor is simply awesome as Dallas, taking the classic "hooker with a heart of gold" archetype to perfection, making a very real and human character. John Carradine shows his talent in a role that, while not having many lines, says more with physical expression than with words. Ford really knew how to bring the best out of the seasoned character actor. However, the real jewel of this movie is the truly outstanding performance done by Thomas Mitchell as the friendly, yet unreliable Doc Boone. Mitchell creates a charming character that serves as the glue that holds the group together with his good humor and sharp wit. It is truly the work of a master.

One could say that "Stagecoach" is simply a film where everything is just the way it has to be for making a masterpiece; for starters Dudley Nichols' screenplay is certainly one of his best works, playing with his assortment of characters in very clever and original ways. Nichols takes Haycox's story to higher levels, and while nowadays the exploration of morality done in "Stagecoach" is kind of clichéd, it still feels fresh after all those years of imitations and homages. It's true that "Stagecoach" owes a lot to Ford's directing style, but Nichols too deserves the credit for its freshness and overall success; I would even say that along with Ford, Nichols reinvented Epic Westerns with this movie. Finally, Ford's terrific use of music to enhance this atmosphere and Yakima Canutt's brilliant stunts (after all Ford really knew how to make action sequences) complement this film and put it in a category few Westerns to that date had achieved.

While of course by today standards this film is considerably dated (and its plot is probably now predictable), John Ford's "Stagecoach" is still definitely one of the best Westerns of the 30s, and probably one of the best ever made. True, it still has many of the typical characteristics of 30s Westerns (almost a "shoot 'em up" in the third act), and I don't doubt that it won't be everyone's cup of tea, but it's hard to deny that this is no B-Movie, this is truly the birth of the Western as an A-List film, and the beginning of the legends of Wayne and Ford, as the two Western icons would team up many times after this film to return to the mythic West. While Wayne would become the image of the American cowboy and later represent the classic Westerns as an obsolete, conservative genre, the movies he made with John Ford are a testament of what the genre could truly do during its classic years.