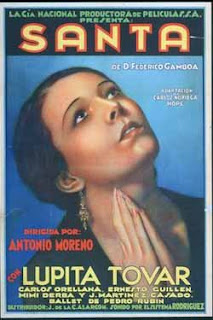 In 1927, Alan Corsland's "The Jazz Singer" was released and being the first feature-length movie with sound, cinema as a medium was changed forever. And the change would be of global proportions as the technology to produce and distribute "talkies" became available in the rest of the world. In 1929, sound films arrived to Mexico, with several theaters offering sound films so, attempts began to be made to produce the first Mexican "talkie". However, the Mexican film industry wasn't in the best conditions at the time, as not only it faced the powerful competition from Hollywood, the country as a whole was still finishing its recovery from the Mexican Revolution, so it wouldn't be until 1931 when the first Mexican sound film started production. Thanks to the efforts of producer Juan De la Cruz Alarcón and writer Carlos Noriega Hope, an adaptation of Federico Gamboa's most popular novel, "Santa", became the very first Mexican "talkie".

Like the novel, the film is the story of Santa (Lupita Tovar), a very beautiful young woman living in the small poor town of Chimalistac. One day a group of soldiers arrive to the town, and Santa meets Marcelino (Donald Reed), a gallant officer who quickly seduces her with his charm. The two begin to see each other constantly, but when the soldiers leave, Marcelino goes with them and leaves Santa brokenhearted and dishonored. When her very conservative family discovers this, they reject Santa and so she leaves Chimalistac and moves to Mexico City looking for a job. It is there where she discovers a whorehouse and decides to become a prostitute. In her new life, she discovers the pleasures of being a highly paid prostitute, but also the loneliness and the loss of her innocence. Between the love of the fiery matador "Jarameño" (Juan José Martínez Casado) and the humble blind pianist Hipólito (Carlos Orellana), her journey will be difficult.

Adapted to the screen by Carlos Noriega Hope, the movie remains relatively faithful to the novel, albeit of course, most of the darkest elements have been either omitted or subtly toned down. Knowing his audience, Noriega Hope transforms Santa's tragedy into a more romantic version of it. It's still a dark tale of a woman's downfall, but it's elements of melodrama are enhanced and a lot more emphasis is put in her search for happiness. Still, while quite melodramatic at times, "Santa" plays with its emotions nicely and it shows that Noriega Hope definitely knew how to hit the right notes when working in this kind of stories, as singlehandedly establishes many of the themes and ideas that Mexican melodrama would follow for years after it. His characters are basically archetypes, but with very well defined personalities that make them less cartoony, more human, and so their journey becomes a more captivating emotional trip.

Brought to Mexico by producer De la Cruz, Antonio Moreno was a very experienced actor in Hollywood's silent cinema (and his career would span more than 40 years) who was hired to helm "Santa" more for his fame as an actor and knowledge of the new technology than for his work as a director, as this was his second film as a filmmaker. Despite this lack of experience in the director's chair, Moreno creates an effective film that follows the romanticism of its script. In fact, Morneo recognizes that the strength of the movie is in the screenplay and his actors, so he basically lets the story flow. This may sound unoriginal, and at times it's certainly uninspiring, but Moreno had important collaborators who helped him to transcend his own stagy silent style and make something beyond: cinematographer Alex Phillips, musician Agustín Lara and editor Aniceto Ortega. Three great talents that certainly added a lot to this production in their respective fields.

As written above, one of the greatest strengths of "Santa" is in the performances of its cast, in fact, I'd say that it's the single most powerful element of the film. Lupita Tovar and Carlos Orellana (in his first film role) truly own every scene and deliver two of the best performances in Mexican cinema. Like Moreno, Tovar was another exportation from Hollywood (she was in the Spanish version of Universal's "Dracula"), and here she shines not only for being a beauty, but because she truly becomes her character, and portrays Santa's descent into tragedy with an unbelievable realism. But if Tovar is great, Orellana is simply awesome as the blind pianist Hipólito, as his very emotional performance transforms what could be cringe-worthy melodrama into excellent dramatic scenes of high quality. The rest of the cast is less outstanding (Donald Reed is pretty bad), but to tell the truth, the movie rests entirely on Tovar and Orellana's performances.

"Santa" is a very good film to watch, even today, more than 70 years after its release, but like most "first" things of something, there are problems that one has to consider due to it being the first of its kind. Like most early talkies, "Santa" has a stagy style reminiscent of silent movies that often feels add, and definitely outdated. Although to its favor, I must say that Moreno uses effectively the talents of Phillips and Ortega to overcome this the best he can, and in fact "Santa" feels less "silent-like" when compared to other early Mexican talkies (1933's "La Llorona" for example). While sparsely, Moreno and Ortega use an editing style very influenced by Soviet cinema (Sergei Eisenstein had visited Mexico a few years before and left a huge mark in the country's cinema), and together with Phillips' cinematography it gives the movie a smooth flow that takes the film out of its staginess. "Santa" may not be the best of those early Mexican talkies, but it's quite better than what one would expect from it.

While not the first adaptation of the novel (it was done in the silent era in 1918), many critics point out to this version as the origin of the "fallen woman" archetype in Mexican cinema (further explored in "La Mujer del Puerto" in 1934) and of many classic elements of Mexican melodrama. I'm not really sure if it is the true origin of those rules, but "Santa" certainly is a movie that helped to consolidate them, as it definitely made of Gamboa's "heroine" more a victim than how she was in the novel. More the kind of victim that has served as main character in Mexican cinema for many years after "Santa"'s release. It certainly established a highly successful formula, as the film was a hit when released on 1932. As the first sound film made in Mexico, the tragedy of Santa is quite a powerful melodrama and an interesting and historically relevant film to watch.

Yo tampoco nunca la he visto :(