Indiana Jones and the Kingdom of the Crystal Skull (2008) 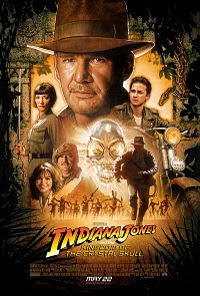 In the late 70s, friends George Lucas and Steven Spielberg were two rising filmmakers enjoying the success of their recently released films and dreaming about future projects. It is said that while on vacations, Spielberg told Lucas about his desire of making an adventure film, and then Lucas told him about an idea he had been developing for a while: a story about an adventurer in the style of the 30s serial films that he and Spielberg enjoyed so much. 1981's successful "Raiders of the Lost Ark" was the result of that conversation, and the beginning of the adventures of archaeologist Indiana Jones (played by Harrison Ford), whom 9 years and two sequels later would become a modern icon of the adventure genre. 19 years after the last sequel (1989's "Indiana Jones and the Last Crusade"), the year 2008 finds Spielberg, Lucas and Ford returning to the legendary explorer for a new adventure in "Indiana Jones and the Kingdom of the Crystal Skull".

Set in 1957, the story begins with Indiana Jones (Harrison Ford) and his partner Mac (Ray Winstone) captured by the Soviets and forced to led them to the supposed remains of an extraterrestrial creature located in a military base in the Nevada desert. Betrayed by Mac, Jones manages to escape but fails to stop the Soviets from taking the remains. Because of this incident, Jones finds himself under FBI investigation and so is forced to quit from his position at Marshall College. After resigning from his job, Jones meets Mutt Williams (Shia LaBeouf), a young biker who informs him that an old colleague, Harold Oxley (John Hurt), has disappeared after discovering a crystal skull near the Nazca lines in Peru. Chased by the Soviets, Jones and Williams travel to Peru looking for Oxley, only to discover that after being locked on a mental asylum, Oxley has been kidnapped by the Soviets, who seem very interested in the Professor's discovery.

After many, many years of development (this sequel had been in preproduction several times since 1989), several scriptwriters hired and fired, as well as countless drafts and plot ideas developed, writer David Koepp was the man responsible for the final screenplay for "Indiana Jones and the Kingdom of the Crystal Skull", adapting it from a story by George Lucas and Jeff Nathanson. Remaining in tone with the previous films in the series, this sequel keeps that mix of adventure, fantasy, romance and comedy that has been essential part of the Indiana Jones franchise since the beginning. Of course, things have changed after 19 years and the familiar characters reflect a significant growth but at their core, they remain faithful to the past and their personalities. Also, since the movie is set in the 50s, themes and elements from 50s B-Movies have been introduced, making this sequel a homage to that era just like the previous films payed tribute to the 30s serials.

As expected from director Steven Spielberg, the film is visually impressive and of excellent quality on the technical area. There's a notable conscious effort by Spielberg and cinematographer Janusz Kaminski for recapturing the style of the previous films (which by the way, had Douglas Slocombe in charge of cinematography) in terms of look and overall atmosphere; and to a certain extent they succeed, as while of course there are plenty of modern special effects and computer generated images employed, for the most part the movie still has that trademark "Indiana Jones feel" (complete with John William's score) at least on the visual side. But still, something special seems missing from the whole thing, something youthful, and I'm not dissing the cast's age (Ford truly does an impressive job for his age), I'm talking about Spielberg himself, whom while owner of a more mature and perfected style, feels less adventurous, less willing to take risks and at times even unable to recapture that spark that existed on his younger style.

It was a nice surprise to see that almost 20 years after the last time he wore the fedora, Harrison Ford is still Indiana Jones and is not afraid of proving it. The role still fits him like a glove, and Ford easily brings back the persona of the iconic adventurer he made a legend. And even nicer surprise was to see old timer Karen Allen returning for another shot and giving her best, becoming one of the highlights of the film (despite having a tragically underdeveloped character). Shia LaBeouf is better than expected as Jones' new partner Mutt Williams, delivering an effective performance and having very good chemistry with Ford. Cate Blanchett plays the film's villain, Dr. Irina Spalko, and while she has lots of fun and tries to make the most out of her role, she can't escape from the poor, stereotypical character she was given. The same happens to Ray Winstone and John Hurt, although at least Winstone fares a bit better than Blanchett as Jones' former sidekick Mac.

Well, as written above, Spielberg does his best to recapture the old spirit, but while visually he succeeds and this film looks exactly as if it had been done right after "The Last Crusade", the feeling is somehow not the same. The problem is not a lack of adventure scenes (there are plenty of them), but a lack of reality in them. Of course, the Indiana Jones films have never been serious or realist, as they have always had a the tongue firmly in cheek, but there was always a sense of danger, of humanity, that made them believable. That's missing here, as one never gets the feeling that the hero "might not make it this time", which was instrumental part in making Jones a human, believable character in the past films. But well, that's not the worst of the film's flaws, it's real problem is that the script is just not that good. Don't get me wrong, it's far better than most adventure films (and I'm not asking for realism), but in its attempt for comedy it sometimes gets absurd, and several characters are so poorly developed that it hurts (mainly the villains).

It's hard (probably impossible) to judge "Indiana Jones and the Kingdom of the Crystal Skull" without comparing it to the previous films in the series, and given the 19 years of separation between this one and the previous ones, a certain bit of nostalgia plays a big role when doing it. So I guess that, avoiding comparisons, the fourth installment in the Indiana Jones saga is quite a good film on its own right. It has lots of flaws, most of them the fault of its poorly constructed script (it seems that after firing writer Frank Darabont, Koepp and Lucas felt rushed to finish it), but it's still an entertaining film. It's not that the film is bad, it's definitely not, but it's just not up to what was expected from Indiana Jones.

Speaking of karen Allen, I wrote an unsolicited script for Starman 2 back in 1998. It was my first script and I quit college to finish it. It’s been gathering dust ever since. I sent it to Jeff Bridges and John carpenter, although I would prefer if Carpenter didn’t direct a sequel. I wrote some good f/x sequences and some interesting characters. I’m pretty sure I’ll never be involved, but I’d to see the f/x scene from the beach being incorporated, (Jeff’s manager Neil will know the one, totally plagiarised from another movie, but it would look great on film today). If anyone has any questions, email me at hansenfilm@yahoo.ie and I’ll answer them. (Although I won’t give away any plot points. And yes there is a son and indeed, I actually have the perfect casting suggestion!!

"But still, something special seems missing from the whole thing"

I agree. This film was just not my cup of tea. It has a few good moments and funny gags, but not enough to justify why we have been waiting for so long (19 years!) for a sequel. I wished they made a completely different film altogether.