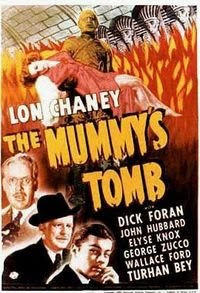 Even when under his lead Universal Studios achieved great critical and commercial acclaim, producer Carl Laemmle Jr.'s risky way of making business (basically to spend a lot in every production) did not survive a strike of bad luck, so after a series of disastrous flops he was forced out of his studio. His departure brought significant changes to the Studio, one of them being the relegation of Universal's horror films to the B-movies division. Without Laemmle, horror was no longer a serious product and a field of experimentation, but a way to produce thrillers able to draw more audiences to win back production costs. This change of mentality wasn't really felt until the 40s, and while this new conception of horror did produce good movies (1942's "The Wolf Man" being the prime example), most of Universal horror films of the decade weren't that lucky, and personally, I think that the two series that got the worst part were the "Invisible Man" films, and the films about Kharis the Mummy.

"The Mummy's Tomb" begins thirty years after the events of the series previous installment ("The Mummy's Hand"), with aging adventurers Stephen Banning (Dick Foran) and 'Babe' Hanson (Wallace Ford) living peacefully in New England after winning fame and glory as archaeologists due to their discovery of Princess Ananka's tomb years before. While his wife Marta has died, Banning has a son, John (John Hubbard), who has followed his father's footsteps and is going to marry a beautiful girl named Isobel Evans (Elyse Knox). However, back in Egypt things aren't as peaceful, as High Priest Andoheb (George Zucco), whom miraculously survived his encounter with Banning and Hanson, has been training a new Priest, young Mehemet (Turhan Bey), in order to send him to America with the mission of killing those who desecrated Princess Ananka's tomb and bring her body back to Egypt. To do it, Mehemet will have the aid of the Princess' immortal protector: Kharis (Lon Chaney Jr.), the living mummy.

While Neil P. Varnick wrote this sequel to Griffin Jay's story "The Mummy's Hand", it was Jay (along Henry Sucher) again who was in charge of the screenplay for this movie. As the story moves away from exotic Egypt to a more familiar New England setting, so the tone and mood of the story moves far from the action-adventure one set in "The Mummy's Hand" to a darker one, focus on horror and suspense, in an apparent attempt of taking the Mummy series back to its roots. Varnick's story has a very interesting point: the way he builds up his story in a fashion similar to Agatha Christie's mystery novel, "And Then There Were None", which gives the film a tone that makes almost a precursor of the "slasher" sub-genre, with Kharis hunting the friends and family of Steve Banning, killing them one by one in order to fulfills his mission. However, unfortunately it also brings back what could be called as the series' infamous trademark: the constantly reused plot device of having the Priest in question fall in love with the hero's love interest.

In the director's seat was Harold Young, whom after having a relatively good start in the British industry (helming 1934's "The Scarlet Pimpernel" for example), spent the late 30s making B movies of almost every possible kind, many of them for Universal Studios. "The Mummy's Tomb" is one his better films, which sadly is not saying much, as his directing is not exactly one of the film's best elements. In fact, it could be said that its Young's dull and unimaginative way of film-making what really brings down what was a good concept with real potential of making a better film. For starters, Young's camera-work is very static, almost stagy, and while cinematographer George Robinson really does a good job in giving a horror atmosphere to a small American town, little is done to take advantage of that. Even worse is the way that Young's lack of touch for suspense suppresses every chance the story has to show its teeth, so while "The Mummy's Tomb" has the right pattern for being an early "slasher", it never really goes for it.

While Dick Foran and Wallace Ford (stars of "The Mummy's Hand") are back, the weight of the film is actually in John Hubbard, who plays Foran's son. Unfortunately, Hubbard lacks the charm of his predecessors and is in fact a very poor lead character, easily overshadowed by practically everyone else in the cast. It's a real shame that neither Foran nor Ford receive the chance to fully take over the show, because their performances as their aged characters is not really bad. However, the real star of the film is Turhan Bey, who makes the best High Priest in the series after John Carradine (who plays the part in "The Mummy's Ghost"). While his character is badly written, Bey gives the Priest that special aura, mix of exotic mysticism and charming class that he always imbued in his roles. The way Bey makes a character as awfully developed as the Priest work relatively good against all odds is a commendable feat in itself. Fresh from his rise to stardom in "The Wolf Man", Lon Chaney Jr. takes over the role of Kharis, but is wasted in a character that only requires him to be big and menacing.

As written above, the concept of "The Mummy's Tomb" was really good and with the potential of keeping the series as a horror tale with credibility. The way it predates many of the conventions of the slasher sub-genre is quite interesting, as it has almost all the basics: a seemingly unstoppable killer roaming the town methodically killing people related by an event of the past. But it just didn't' work out in the end, and director Harold Yound is partly responsible of that. Granted, while the idea was creative, the dialogs are pretty bad and it's clear that it was poorly developed (or at least, done in a hurry) as many things happen without a real reason or motivation. Still, Young's decision of spending almost a third of the film's runtime recounting the story of the previous film employing an enormous amount of footage borrowed from 1932's "The Mummy" and 1940's "The Mummy's Hand" is a major mistake that's difficult to justify (even for a low budget film), as it does nothing but to cheapen the whole effect of the movie.

Still, I must say that surprisingly, despite its many shortcomings, "The Mummy's Tomb" is a film that truly can be enjoyed, mainly because of the important fact that not only it's a very interesting concept for the time, but because it really could had ended up worse that how it did. The film's good acting and Jack Pierce's inimitable make-up truly make up for some of the film's worst elements, and in the end, "The Mummy's Tomb" is a nice conclusion to the story started in "The Mummy's Hand". Unfortunately, Universal didn't think that way and produced another two stories with Kharis the Mummy and priests unable to stop falling in love with the heroes' ladies. I guess that some things just can't be avoided.