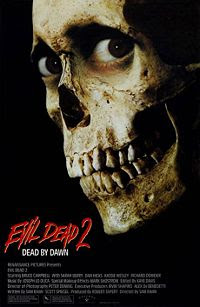 After three years of production, in 1981 three enthusiast young men finally saw their efforts crowned with the release of their very first movie: "The Evil Dead", a wild and imaginative horror film that quickly became a classic of the genre. Director Sam Raimi, producer Robert Tapert and actor Bruce Campbell found a bright beginning for their respective careers in the enormous success of their modest independent film, so they decided to move forward despite the critical acclaim and the audience's claims for a sequel to "The Evil Dead". Raimi and Tapert followed "The Evil Dead" with "Crimewave", but the film wasn't really the success they expected and the terrible reception it had threatened their young careers. This failure made them reconsider the offer of a sequel, so, with the financial aid of writer Stephen King (who had helped to get "The Evil Dead" noticed), the three friends decided to return to the cabin at the woods to continue the adventures of Ashley J. Williams, better known as Ash.

In "Evil Dead II", Ash (Bruce Campbell) and his girlfriend Linda (Denise Bixler) go to a cabin in the woods in order to spend a romantic weekend, but their plans are ruined when Ash plays a mysterious tape where an archeology professor (previous owner of the cabin) recites passages from an ancient book. The recording is an invocation that unleashes the forces of evil hidden in the woods. Linda gets possessed by evil, so Ash has to kill her to survive the night. Trying to escape, Ash discovers that the bridge has been destroyed, so he's forced to return to the cabin in order to hide from the demons. In the meantime, Linda's corpse is back from the grave, so Ash must destroy her again, losing a hand (and his sanity) in the process. Now, two archaeologists, Annie (Sarah Berry) and Ed (Richard Domeier), arrive to the cabin with the help of Jake (Dan Hicks) and Bobby Joe (Kassie DePaiva), and noticing Ash's mental state, they assume that he killed Linda and Annie's parents. But the evil dead still roams the woods.

Developed with a more comedic tone than the original film, "Evil Dead II" owes a lot to writers Scott Spiegel (one of Raimi's childhood friends) and Sam Raimi's taste for slapstick comedy, mainly the one found in the work of The Three Stooges. Still, the fact that "Evil Dead II" is less straight horror than its predecessor doesn't mean it's a more restrained film, as while done in a tone of black comedy, the movie is as grotesque and irreverent as the first film, and it could be said that the non-serious approach allowed the writers' imagination the chance of flying with even more freedom, specially when writing the series of torments Ash must endure at the cabin, as comedy allows them to make of them a surrealist nightmare without fear of making it too absurd. The characters are better developed this time too, specially Ash, whom is no longer the cardboard stereotype of the first film and finally develops a personality of his own, as the horrors of the cabin make him a hardened cynic with a bit of a maniac.

Dynamic and explosive, Sam Raimi's camera-work is once again the star of the film, as just as he did in the first film, Raimi (giving great use to Peter Deming's cinematography) transforms the camera into a character, representing the forces of evil that haunt the rest of the characters. Raimi keeps the action going through the film at an appropriately fast pace, without giving the characters (and the audience) a minute to rest. This works perfectly, considering the very tongue-in-cheek tone of the film as it makes the movie feel like a thrilling roller-coaster that doesn't have an end. As written above, the comedy tone doesn't mean that "Evil Dead II" is a softer movie than its predecessor, as Ash's dark adventure still packs a good dose of grotesque imagery, gory violence and bizarre events courtesy of the special effects team (that included KNB founders Robert Kurtzman, Greg Nicotero and Howard Berger), which really made a great job in bringing to life Raimi's nightmarish vision.

Probably one of the worse (if not the worst) things in the first "Evil Dead" was the acting, which while not really bad, was pretty much amateur and showcased the lack of experience of the performers. In "Evil Dead II", there's a nice improvement in this department, although with one exception, it's nothing too amazing. That exception is definitely Bruce Campbell, who greatly develops his character and makes it larger than life. While the writers do deserve some credit, it is actually Campbell who makes Ash to be unforgettable, as beyond his words and actions its his whole persona and mannerisms what makes him a quite unique character. No wonder he became a horror icon after this film. The rest of the cast is quite effective, although as written above, nothing too surprising. Sarah Berry is quite good as Annie, although Richard Domeier doesn't give his best work as Ed. It's worth to point out that Dan Hicks and Kassie DePaiva are very funny as their two "guides".

While often considered a remake of the first film, "Evil Dead II" was conceived as a sequel since the very beginning, with the events of "The Evil Dead" shown as flashbacks, however, since legal reasons prevented Raimi from using footage from the first film, he had to shot the scenes again. Unfortunately, budgetary constrains forced him to make it extremely simple, cutting the rest of the characters leaving only Ash and Linda, which is why at first sight it seems to be a remake. In many ways "Evil Dead II" is a big improvement over the first film, as it showcases a better cast, higher production values and a more experienced crew; however, at the same time it feels somehow less original (well, that's natural in sequels) and it's definitely less groundbreaking than Raimi's first venture. The shift to comedy is another difference that may turn off someone expecting another "ultimate experience in grueling horror", but personally I don't think that's too much of a change, as the original already had its fair share of tongue-in-cheek black comedy.

Given its differences, fans tend to be divided about which "Evil Dead" is the best. I think that the answer is ultimately up to the person's tastes, because honestly, both are remarkable horror films that truly show the promising talent Raimi had in those early films. Personally, I prefer "The Evil Dead" over this one, mainly because I just think it's fresher and has the charm of being the result of an inexperienced crew doing the best they can; however, "Evil Dead II" is indeed a worthy sequel, that with its clever script, powerful directing and unforgettable performances definitely make one horror film that has to be seen to be believed. Raimi concluded Ash's adventures with "Army of Darkness", a movie that, while less fortunate than the first two "Evil Dead", had the same wild spirit that made the series a cult favorite. "Evil Dead II" may not be the ultimate experience in grueling horror, but hey, it's got Ash, and that's all you need.

Ah, one of my all time favorites. Good review!

Aaah, yes, this is one movie that's still on my "must see list". Out of the whole trilogy, I only saw "Army of Darkness".