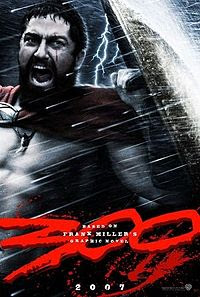 The Battle of Thermopylae is probably one of the most famous battles in ancient history, as it is often used as a prime example that the size of an army does not decide a battle. The reason for this lays in the fact that in Thermopylae, a small army of roughly 7000 Greek soldiers managed to defend themselves against the biggest army of its time, the Persians, which counted in its ranks more than 2,500,000 soldiers. While this is the main reason behind its importance, the battle has reached mythical status because it was also an example of courage, as when the battle seemed lost, most of the Greek soldiers retreated with the exception of 300 Spartans, who decided to put a tremendous last stand against their enemy. Their courage not only inspired 700 Thespians to join them, but also has inspired many notable works of art, most recently the 1962 movie "The 300 Spartans" and Frank Miller's 1998 comic book "300". Now, Miller's graphic novel is the basis of a new movie about Thermopylae: Zack Snyder's "300".

"300" can be summarized as the tale of the Battle of Thermopylae, as narrated by a Spartan soldier named Dilios (David Wenham) to his fellow Spartans. The story begins with a brief recounting of King Leonidas' (Gerard Butler) youth, and the events that made him the courageous leader he was. Years later, as a Spartan King, he receives the news that King Xerxes of Persia (Rodrigo Santoro) is on his way to Europe, and gives the chance to Sparta to join him in his quest for conquering the world. Prefering to keep his people free instead of paying tribute to Xerxes, Leonidas refuses, and prepares himself to defend his people. However, the Spartan council has been bought by Xerxes, and refuses to allow Leonidas to go to battle with the full Spartan army. Knowing that this will be his people's doom, Leonidas decides to take with him only 300 of his best soldiers and goes to battle the enormous Asian army alone, in what later will be called the Battle of Thermopylae.

Adapted by Kurt Johnstad, Michael Gordon and Snyder himself, the movie is almost a word for word translation of Frank Miller's graphic novel of the same name, which as well was mainly based on Herodotus' writings on the subject. However, this doesn't mean that Miller's work (and therefore the movie) is an accurate history lesson, as Miller's art takes enormous artistic liberties with the story, making his rendition of the Battle of Thermopylae more mythic than realistic, more in tone with the epic poets than with Herodotus' attempt at historical objectivity. While this of course may bother purists, it truly works in the context of the story (being after all, the narration of a soldier), as it's essentially an exaltation of the achievements of a country's army that of course demonizes its enemies. More an action film than a drama about war, the movie focus completely on the event of the battle, which keeps the plot simple but also results in a severe lack of character development.

The film's highlight is definitely the highly stylish visual look that director Zack Snyder uses for his movie, which basically follows Miller's art to the letter. Using the same digital technique than Robert Rodriguez used for "Sin City" (another of Frank Miller's comic books), Snyder brings Miller's graphic art to life in an extremely faithful way taking a lot of care for details, almost putting every frame of the comic book in the big screen. This extremely stylized visual look not only extends to digital backgrounds and special effects, Snyder's movie uses slow motion, great choreographs and a superb art direction to create an operatic narration that, just like in Miller's comic book, accentuates the mythic traits of the story, showing Spartans as super-soldiers and the Persian army as a hellish array of monsters. While of course this is completely inaccurate historically, it fits the story Snyder is trying to tell, although this extreme care for the style often makes him forget to care for the substance.

Now, "300" is without a doubt a great technical achievement and visually, a wonderful film to watch, but it has some major problems deep inside the flashy look, with the performances by the cast being only the top of the iceberg. While Gerard Butler has received a lot of criticism as King Leonidas, he is actually one of the best in the film, and does a really good job with what he has to work (which in all honesty, is not much). If there's any fault in Leonidas' characterization, I'd blame the source material, not Butler. The best in the film is in my opinion, David Wenham, who truly adds a lot of mood and atmosphere to the movie with his narration. He's the only one who seems to capture the feeling of "Epic tale" tthe movie is going for. Sadly, not everyone in the cast was up to the challenge, and one wonders if they were chosen for the part thanks to their physical looks instead of acting talent. Lena Headey, Michael Fassbender and Tom Wisdom are really the main offenders, who make some of the worse parts of the script look even worse with their poor delivery.

Personally, I think that the movie's most serious problem is the overall lack of characterization in the story, which to be fair, is a flaw that comes straight from the source as Miller's simplification of the Battle is what made most of the characters look two dimensional at best. While it is true that Miller remained true to Herodotus and that some lines came straight from his work, it's difficult not to notice how silly some dialogs are, probably the result of a severe misunderstanding of the sources about Thermopylae. True, it's an action film, but a little more of care while developing the script would had been enormously beneficial, because as flawed as it is, Miller's graphic novel had great potential that with some twitching could had resulted in a classic. Another problem of the film is definitely Snyder's complete focus on the visual aspect of his movie. Don't get me wrong, I know that a movie like "300" isn't supposed to be a powerful drama, however, Snyder's visuals tend to get pretty overwhelming, with an excessive use of slow motion that while effective at first, soon becomes a tiring gimmick.

While I do consider "300" to be a flawed film, I must say that it's pointless to judge it in terms of historical accuracy because it never attempts to be accurate and dwells more in the realms of myth. Many have criticized this aspect (as well as Miller's obvious political subtexts) without noticing that "300" is not here to teach or to illustrate, but to simply provide good entertainment, a purpose that despite all its problems, it finally achieves with honors. Granted, that the purpose of the film is only to entertain it's not really a valid justification for a movie's flaws, but what I'm saying is only that the criticism about its historical accuracy is unfair. It's a flawed movie, but not for those reasons. And in the end, that's not that bad.