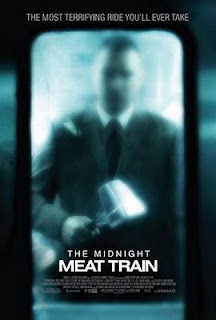 This time in Cult Reviews, my contribution is a review for Ryûhei Kitamura's 2008 debut in American cinema, which was an adaptation of the classic Clive Barker's short story, "The Midnight Meat Train". Starring Bradley Cooper and Vinnie Jones, "The Midnight Meat Train" is a very interesting horror film that features mystery, chilling suspense and a good dose of gruesome violence, all framed by Kitamura's stylish vision. Unfortunately, not everything is perfect on the film, and in fact it suffers from a serious problem that hurts what could had been one of the best movies of the decade. The details about it on my review featured on Cult Reviews.

This month Cult Reviews also features an interesting overview of Brett Leonard's comic book inspired horror film "Man-Thing", all in the trademark style of Cult Reviews' very own Perfesser Deviant. The Perfesser also writes about "Postal", film that some consider to be Uwe Boll's best movie (althought in all honesty, that doesn't say much) and a trip to the time of funky afros and disco music in "Blacula". In tone with the month's marketing device (and with the month's major mainstream release), reviewer Anna McKibben's takes the dust away from the original "My Bloody Valentine" (1981), reviewing the recently released uncut dvd. Finally, Vomitron reviews Jack Hill's 60s oddity: "Spider Baby" (1968), which is also the featured full length movie of the month (remember that Cult Reviews has public domain movies available to watch).

Mmm...probably this movie is the greatest let down I had to deal last year. The main problem, as you mentioned in your review at Cult Reviews, it's the screenplay. They ruined it big time, but still the filme is watchable, mostly because of the director's talent.

P.S. Don't like the Word Verification thing on your blog :(

hey I would like to see more articles about Indian cinema in your site... I'm a big fan!