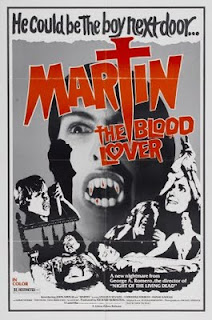 A key figure in the development of modern horror, American filmmaker George A. Romero forever changed the face of the genre in 1968 with his highly influential film, "Night of the Living Dead". What Alfred Hitchcock and H.G. Lewis had started in the early years of that turbulent decade, the 28 years old Romero would take one step further with his indie movie, which featured an urban style of realistic horror, a rawer kind of violence and a complete reinvention of the zombie as a monster. Unfortunately, Romero's following movies lacked the impact and success of "Night of the Living Dead", and only a return to his zombie apocalypse would take him back to the top: 1978's "Dawn of the Dead", the ultimate zombie movie. Nevertheless, amongst those less popular efforts done between "Night" and "Dawn", there's a modest film that despite lacking the tremendous popularity of the "Dead" films, is definitely as interesting as them, and perhaps one of Romero's finest works. That film is 1977's "Martin", the sad tale of a vampire for the modern world.

"Martin" is the story of Martin Matthias (John Amplas), a solitary young man in his early 20s with a tendency to use narcotics to sedate women in order to be able of slicing their wrists and drink their blood, believing himself a vampire. Martin travels to Pittsburgh, where he meets his uncle Tada Cuda (Lincoln Maazel), an hostile old man who accuses Martin of being his cousin, an 84 years old vampire from his native country. Cuda takes Martin to his house in the nearby town of Braddock, hoping to be able to save Martin's soul before killing him. While Martin tries to get along, Cuda treats him like an ancient vampire, using old folklore to protect himself and his granddaughter Christine (Christine Forrest) from Martin. All this takes its toll in the already alienated Martin, but he manages to develop a friendship with Christine, who thinks that Martin believes he is a vampire because their family has driven him insane. With Christine's help, Martin begins to open up a bit, even improving his relationship with women, but even in modern times tragedy follows vampires where they go.

In an interesting revision of the vampire myth, George A. Romero transforms the legendary predator of folklore into a troubled young man, whose apparent inability to relate to the world is manifested through silent killings and strange visions of romantic vampirism. But still, while Martin has those idyllic hallucinations, he still rejects Cuda's lore about vampires as silly superstitions, thinking of himself as "the real thing". Complex, realistic and rich in character development, the film is focused on Martin's life at Cuda's house, with the old man trying to save Martin's soul via magic and religion while Christine tries to save Martin's mind from the madness he lives in. A captivating character study, "Martin" deconstructs the vampire myth and plays with its lore and rules, keeping always in ambiguous terms whether Martin is really a vampire or not. Imbued with a sad, nostalgic tone, "Martin" is a tale of loneliness and decadence, as the one sure thing that Martin has in common with folkloric vampires is that both are complete outsiders.

Shot with a low-budget, "Martin" has a very realistic urban style, albeit one with a dark and depressing tone, as the town of Braddock is presented as a dying industrial suburb. Through the lens of cinematographer Michael Gornick, Martin's life is framed by a bleak atmosphere where the urban landscape equates loneliness and decadence. Unlike the common vampire stereotype of most horror films, Romero's bloodsucker is anything but seductive; on the contrary, Martin's inability to relate with the world forces him to use narcotics to drug his victims. While in his visions (shot as a stylish silent film) he's a complete vampire, in his reality, Martin is nothing but a bunch of unsatisfied wishes; with his only contact with the outer world being his calls to a night radio talk show. And not only the young vampire is a troubled person, but every character in the film seems to be trapped in that depressing loneliness that Romero implies that's inherent to our modern life. While slow in rhythm, Romero manages to keep things interesting and the film never runs out of steam.

Leading the cast is John Amplas, who delivers a truly powerful performance as the film's title character, Martin Mathias. In films like this, which are essentially a character study, the acting is of tremendous importance for the success of the film, even more with a story as unusual as the one in Romero's "Martin". Fortunately, Amplas delivers a wonderful job, capturing perfectly the tortured soul of the troubled young vampire. Wheter one believes in Martin as a mentally ill man, or as a true modern vampire (it's never fully stated which is the truth), Amplas is always in perfect tone with his character, fleshing out a very human and sympathetic character (quite a feat, because no matter if his vampirism is real or fake, Martin is still a very real serial killer). As religious fanatic Cuda, Lincoln Maazel is very effective, sometimes even frightening; albeit a couple of times he seems to overact a bit more than necessary. As the more "normal" character, Christine, Christine Forrest gives a good balance to the story, and her work is subtle, yet quite appropriate.

Dark, melancholic and fascinating, "Martin" is not a typical horror film, in the way it examines the mind of its lead character, the horrors he experiences and the horrors he creates. The vampire theme of the film serves Romero to explore a serial killer from a quite unusual and interesting perspective, as it's truly Martin's deluded psyche what's shown in the film. With its highly atmospheric cinematography, captivating storyline and the eerie score by Donald Rubinstein, there's little to complain in "Martin", however, it's a complete change of pace from Geroge A. Romero's other, more famous films. And perhaps the fame of Romero's iconic horror films about zombies is "Martin"'s worst enemy, because this modest little gem will definitely disappoint those expecting another "Dawn of the Dead". The atmosphere is similar, but the style is completely different, and "Martin"'s slower, subtler pace may not be something for fans of gore. Nevertheless, while a very different kind of beast, Romero's quirky tale about the alienation of a modern vampire is as good as his famous zombie films.

It's a shame that despite Romero's status as a master of horror, his films outside his "Dead" series tend to be overshadowed and forgotten. But "Martin" is a proof that there is more in Romero's career than zombies, and that he is certainly not a one trick pony. Melancholic, atmospheric and subtle, "Martin" may not be shocking or brutal, but it's the kind of horror that gets under the skin, the one that disturbs rather than terrify. Making a vampire tale for our age of disbelief, Romero made in "Martin" a true gem of psychological horror, a powerful study on the serial killer theme and simply one of this best films. Definitely on par with his zombie classics. And that's not an easy feat.

It really is an excellent movie that was unfairly overlooked for a long time. Fortunately, its reputation has significantly grown over the years.

I wouldn't be too quick to dismiss those other post-NIGHT efforts, though. Some of them are quite good, particularly THE CRAZIES (a HELL of a movie). Between the Dawn and the Day of the dead, he made a fantastic little oddity called KNIGHTRIDERS of which I'm rather fond--a metaphor for his own career in film, played out by a modern-day Arthurian "court," modeled on the Society for Creative Anachronism. George has always been an interesting fimmaker.

Dear J Luis,
I contact you by comment because I didn’t find any other way to do it.

I would like to introduce to you Mperience (www. mperience.com), a web platform on which you can share in a brand new way movies, tv-series, music, art, and books. It also allows you to blend videos of artistic content with your own words, simply creating short stories called Memes that you can spread to a wide audience by a simple click.

As you can see, we have many themes in common with your blog and we would like to publish on Mperience some of your articles.
Actually we already inserted your post about Martin on our page dedicated to

I hope that we could keep in touch and collaborate also in the future. So, if you are interested, please don’t hesitate to contact me for further information, questions or suggestions.