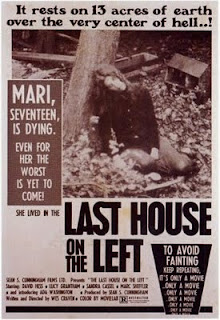 Due to his many contributions to the genre (mainly his 1984's classic "A Nightmare on Elm Street" and the rejuvenation of the slasher film produced by his 1996's movie, "Scream"), filmmaker Wes Craven has earned rightfully the title of "Master of Horror", with a career dedicated from the very beginning to create nightmarish tales of horror and suspense. From undead psychopaths to zombies, and from masked killers to werewolves, Craven has touched nearly every theme in the genre. While certainly Craven not always delivers what one would call a masterpieces (he's had his fair share of botches), in his movies there's always at least an original twist on familiar subjects. Many have been the nightmares created by Craven, but even when his contributions to the genre are many, perhaps no film amongst his body of work has had the raw power that his very first film, 1972's "The Last House on the Left" had. An adaptation of Ingmar Bergman's "Jungfrukällan" ("The Virgin Spring"), this tale of violence and vengeance is one impossible to forget.

"The Last House on the Left" begins with Mari Collingwood (Sandra Peabody) getting ready to attend a concert with her best friend Phyllis (Lucy Grantham). Mari lives with her parents, Dr. John and Estelle Collingwood (Richard Towers and Cynthia Carr), in a nice house in the woods. Despite her parents' concern, Mari and Phyllis go to the city for the concert. At the same time, a group of violent criminals led by Krug Stillo (David Hess) have escaped from prison, and are resting in an apartment. When the concert is over, Mari and Phyllis meet Krug's teenage son, Junior (Marc Sheffer), who leads them to the apartment with the promise of selling them marijuana. At the apartment, both girls are trapped by the criminals, who begin to torture and rape them. Next morning they are taken with the criminals as they travel to the countryside, but a malfunction in the car force the group to walk through the woods, where the girls are brutally killed. The criminals decide to rest in a nearby house, posing as salesmen, unaware that the last house on the left is actually Mari's house.

Written by director Craven himself, "The Last House on the Left" began with the idea of making a very graphic and shocking film. Supousedly, the original screenplay contained heavier violence, but Craven later decided to tone down a bit the script. One can only wonder how harsh was that softening of original story because, while certainly there are more graphic films, the violence in "The Last House on the Left" is quite strong and powerful. Like Bergman's film (itself based on a Swedish ballad), the main theme of the film is vengeance, specifically, the justification of vengeance against those who have harmed a loved one. Craven's take on the subject is based chiefly on violence, with Mari's parents, normally a peaceful couple, uncovering a darker side of their souls when they discover that the people they have helped actually have done terrible and irreparable things to their beloved daughter. While somber in tone, Craven decides to insert bits of comedy to lighten up the story, but the attempt ends up as silly and out of place.

In this his first time as director of a feature length film, filmmaker Wes Craven already shows his talent for storytelling and that fascination with the villains of his stories that would become part of his style. Limited in budget, Craven takes advantage of the raw quality of his equipment to achieve a realistic style, that fits nicely the crude nature of his story. As written above, the graphic violence of the screenplay was slightly toned down, but the implied violence of the images is intact, and perhaps make the film to look more realistic. Through the lens of cinematographer Victor Hurwitz' camera, Craven creates a nightmarish vision which power is in the realism of what's on screen. This powerful impact is perhaps what makes the comedy side of the film to look even more childish than what it really is. Craven's use of the cops as comedy relief is truly incomprehensible, as the realism slowly crafted by the work of Hurwitz' cinematography and the editing (by Craven himself), goes through the window whenever the cops appear.

The acting in the film is for the most part effective, albeit a couple of performances are quite weak. In the difficult roles of the abused girls, Sandra Peabody and Lucy Grantham are quite good, delivering believable performances as two teenagers looking for a good time. While a couple of times they feel a tad wooden, overall their work in the film is more than appropriate. Now, the ones who steal the show are the bad guys, mainly David Hess and Fred Lincoln. As the leader of the gang, Hess is an imposing yet strangely charming figure, and delivers probably the best performance in the film. As the sadistic maniac Weasel, Fred Lincoln is perfect, giving an eerie degree of realism to a character that could had been easily a mere stereotype. Also worth to notice is Marc Sheffler's work as Junior, which is quite effective despite not being a terrific performance. Unfortunately, Richard Towers and Cynthia Carr, who play Mari's parents, aren't a fine equal to such collection of good performances. It's not that they are bad, they just feel average in contrast.

The rest of the cast ranges from average (like Jeramie Rain) to plain bad, as in the case of Marshall Anker and Martin Kove (the cops). However, it would be too harsh to put the blame entirely on Anker and Kove, as in all honesty, their characters themselves are two big problems that the film has. As written above, the cops appear as comedy relief in bits where their incompetence is played for laughs, pretty much in the tone of the Keystone Cops. The problem with this, is that their antics are so ridiculous that the effect achieved, instead of being a release of the tension, becomes confusion about what's happening, as the comedy is so exaggerated that feels out of place in the middle of the seriousness of the rest of the film, and completely breaks the pace the film has. Other than that (which is a problem that could had been solved with editing), "The Last House on the Left" is a top notch horror film that takes a familiar theme (stories about rapes and revenge have always been popular) and makes a powerful vision out of it.

In a way, it is really amazing what the young director achieved in his first film (and producer Sean Cunningham, who would go on to become a familiar name in 90s horror films), as with his limited resources Craven conceived a shocking nightmare that more than 30 years after its release, still strikes as a powerful tale of revenge and its side effects. Probably Freddy Krueger and Ghostface are his most famous and recognized monsters, but what Craven created in this movie, was an exploration to the monster dormant inside of each one of us, and that's probably why "The Last House on the Left" is still so scary, haunting and fascinating: because it's hard not to feel identified with the couple. Proof that often talent is more important than resources, "The Last House on the Left" marked the beginning of Craven's career in horror, and that was only the beginning. And remember, it's only a movie.

"While somber in tone, Craven decides to insert bits of comedy to lighten up the story, but the attempt ends up as silly and out of place... Craven's use of the cops as comedy relief is truly incomprehensible, as the realism slowly crafted by the work of Hurwitz' cinematography and the editing (by Craven himself), goes through the window whenever the cops appear."

That's the most common complaint about the film among genre enthusiasts, mostly because it's a part of the movie that has dated until contemporary audiences don't get the reference. Craven was trying, in reaction to what was happening in Vietnam, to de-romanticize violence. At the time, tales of "criminals" who were really just good ol' boys being chased by comedy cops were common--think Ned Beatty in WHITE LIGHTNIN', Jackie Gleason in SMOKEY & THE BANDIT, etc. (the latter hadn't yet been made, of course, but it's probably the most publicly recognizable example of the convention). Craven used the convention as an ironic counterpoint to what's going on in the rest of the film. Look what's happening while these guys are out there screwing around. Not so funny, is it?

That was the idea, at least.

He uses these same conventions in other ways, as well. Krug and co. make a lot of jokes when they're together, and David Hess is genuinely funny. When Krug and the gang and heading out into the wilds, we get a real upbeat, hambone ditty on the soundtrack, the same as would traditionally accompany the good ol' boy "criminals" in this breed of movie.

Except Krug and his band are terribly real, vicious sadists, not light-hearted Bonny-&-Clydes. The rest of the movie is telling us we should be on their side, as per the then-contemporary conventions of those sorts of movies, but they are totally deromanticized figures who are, themselves, disgusted by what they do. Craven is offering a brutal critique of our attitude toward violence.

That isn't to say the comedy cops play well, but they're definitely an integral part of the project, not some bizarre departure from it.

And btw, it's good to see you posting again, Luis.

Oh, I see the intent, but I think Craven failed terrible at it. I didn't mention it on the review (and I should had), but the soundtrack plays wonders with the same intention (similar to "Cannibal Holocaust"'s).

I just feel that what Craven achieved with the soundtrack and with Krug's humor, was missed entirely with the cops.

It's great to read you again, mate