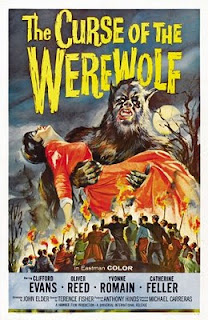 Story says that when a deal for a co-produced movie set in Spanish Civil War fell, legendary British producer Anthony Hinds of Hammer Films decided to use the already built sets in a horror movie of their own in order to at least recover some of the investment. With time and budget against him, Hinds decided to write the screenplay himself, getting inspiration from the legendary 1933 horror novel, "The Werewolf of Paris", by Guy Endore. Writing under the pen name of John Ender, Hinds made his very own adaptation of the classic novel, and titled it "The Curse of the Werewolf". The setting was changed from Paris to 18th Century Spain and the bits about the Franco-Prussian War suppressed, but the eroticism and the tragic Gothic horror were left there. Filmmaker Terence Fisher, Hammer's most successful director at the time (having almost singlehandedly developed Hammer horror with 1957's "The Curse of Frankenstein" and 1958's "Dracula"), was the man chosen to give life to Hinds' epic tragedy of a man born under the terrible curse of the Werewolf.


The story of "The Curse of the Werewolf" begins with the arrival of a poor beggar (Richard Wordsworth) to Spaniard county, where he becomes the victim of the Marques' (Anthony Dawson) sadism and finds himself a prisoner at the castle. Time goes by and many years later a beautiful mute servant girl (Yvonne Romain) refuses the Marques' advances and ends in the same cage as the beggar who, driven mad because of his captivity, brutally rapes the young woman. After that tragic event, the servant manages to escape from the castle, only to be found by Don Alfredo Corledo (Clifford Evans), who takes the woman home in order to take care of her. To his surprise, the girl was pregnant, and her child is born on Christmas Day; a day when according to an old legend, demons attempt to possess unwanted babies. Named Leon (Oliver Reed), the child becomes a young man; but the tragic circumstances of his birth have put him under a devilish curse: his soul and the demon battle over his body, making him to become a werewolf when the full moon shines over the sky.

As a writer, Anthony Hinds does a very good job at adapting this Endore's werewolf story, as while his story lacks the most lurid details of Endore's novel, he manages to keep the essence of the novel intact (its eroticism and darkness) despite being really a loose adaptation. The most captivating element of "The Curse of the Werewolf", is the way it handles the tragic nature of the curse, establishing it as an irremediable dark fate that ultimately awaits for Leon in the shape of a brutal change that he can't avoid to make. Leon suffers from a "disease" he didn't asked for, he simply was born with it. Hinds plays with this aspect of tragedy without excessive melodrama but with an overwhelming sense of impeding doom that makes the movie akin to a horror version of a Greek tragedy. Hinds' way to introduce his audience to Leon's story may be excessively long and slow (almost the entire first third is dedicated to the events previous to Leon's birth), but in the end it really pays off as one can't help but feeling captivated by this carefully constructed tragic myth.

In the early 60s, director Terence Fisher was now regarded as Hammer Films' best director, and his remarkable work in "The Curse of the Werewolf" is further proof that such claim was not baseless, as it's definitely on par with the previous classics he had made for the British production company. Fisher gives great use to the lavish sets and the production design by the ever reliable Bernard Robinson, and makes of "The Curse of the Werewolf" one of his most beautifully looking films. Arthur Grant's work of cinematography captures the colorful and vibrant style previously developed by Jack Asher (Hammer's previous regular director of photography), though perhaps less elaborate. Despite the budget constrains, Fisher creates a Gothic atmosphere of dread that suits perfectly Hinds' tragic story. Speaking of Fisher's take on the script, this is probably the film that better represents Fisher's obsession with the dual nature of evil, and he takes full advantage of his character's dilemma to create powerful scenes of suspense, drama, and subtle yet no less exotic eroticism.

The cast as a whole makes a really good job in "The Curse of the Werewolf", with Oliver Reed being simply perfect as the cursed Leon. Reed's natural charm and powerful presence on-stage really enhance his character's beastly nature. It's a great performance as a man who tries to be good despite having a beast inside. Amongst the many actors who have portrayed werewolves in film, Reed is probably the one who best captures the duality of man and beast. While Reed is without a doubt the star, the highlight of the movie is Clifford Evans, whose performance as Leon's uncle, Don Alfredo, is heartbreaking in its delivery, and certainly brings back good memories of Claude Rains in "The Wolf Man" (1941). Actress Catherine Feller, playing Leon's love interest, is probably the weakest link in the cast, although this doesn't mean she gives a bad performance, but her presence is easily overshadowed by her peers. Hira Talfrey and John Gabriel make an excellent job in the supporting roles of the film, giving the film a heart and completing the main cast of the movie.

"The Curse of the Werewolf" is one of Hammer's most enjoyable movies, combining perfectly period drama with horror, and being another great example or that classic "Hammer look" of brilliant colors and haunting atmospheres. As written above, it is also a story where Fisher's thematic obsessions could be exploited the best, and the tragic angle the story had, served as great basis for one of his most emotionally powerful films. However, it's safe to say that the movie suffers from some quibbles that lessen the film's power. The main flaw is perhaps the fact that the movie is too short for the kind of epic story the script attempts to narrate: it starts very nicely, slowly developing the tragic events with good rhythm, but all of a sudden, some scenes feel a bit too rushed, specially in the final third. Certainly the budgetary constrains had a hand in this, and it's a shame that the flow of the story is not constant as it does feel like a lot was missing. Low production values take its toll in the film's look, but it's still amazing what the production did with what they got.

Along with classics like "The Wolf Man" and "An American Werewolf in London", Terence Fisher's "The Curse of the Werewolf" easily ranks as one of the most enjoyable horror stories about werewolves ever told. The way it conveys the tragedy of the curse and Leon's futile attempts to control it make the movie an excellent film, not only within the horror genre, but in cinema in general. The duality between man and beast is a major theme of most werewolf films, but few manage to capture the internal struggle of the werewolf like this movie. More than 50 years after the release of "The Curse of the Werewolf" and watching how powerful it still is, it's safe to say that the botched deal that prompted Hinds to write this movie was one of the best happy accidents ever.