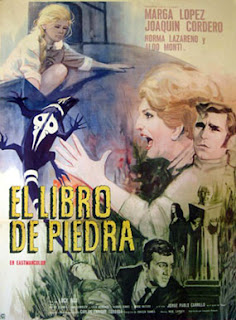 Easily one of the best known horror filmmakers of Mexican cinema, director Carlos Enrique Taboada cemented his status with four horror films that constitute a thematic tetralogy of sorts. "Hasta el viento tiene miedo" (1968), "El Libro de Piedra" (1969), "Más negro que la noche" (1975) and "Veneno para las Hadas" (1984) form what could be called a Gothic horror cycle in which Taboada explored supernatural horror in themes such as ghosts and witchcraft. The first two films are probably the most famous of the four amongst Mexican audiences, mainly due to the great exposure they received in TV; and amongst those, 1969's "El Libro de Piedra" is the most critically acclaimed of the pair. Produced merely a year after "Hasta el viento tiene miedo", this second venture into Gothic horror adds a new and pretty interesting theme to Taboada's obsessions: childhood. Drawing some inspiration from Henry James' classic "The Turn of the Screw", Carlos Enrique Taboada crafts in "El Libro de Piedra" his very own twisted ode to childhood.

In "El Libro de Piedra" (literally "The Book of Stone"), the wealthy industrialist Eugenio Ruvalcaba (Joaquín Cordero) hires governess Julia Septién (Marga López) to take care of Ruvalcaba's young daughter, Silvia (Lucy Buj). The girl has been ill lately and thus she doesn't attend school with the other children. Also, Eugenio warns Julia that his daughter's behavior is more than a tad odd, and he suggests that she may have mental problems. Things have been complicated for Eugenio's relationship with his daughter, specially now that he has married again, to young Mariana (Norma Lazareno). When Julia meets Silvia, she finds a withdrawn girl that distrusts adults and prefers loneliness, specially to play with her friend Hugo. However, Hugo is nowhere to be seen. Julia discovers that Hugo is Silvia's imaginary friend, he is the life-size statue of a little boy holding a book deep in the nearby woods. Soon strange events begin to take place, and soon Julia will discover the true nature of Silvia's obsession with Hugo.

As usual, "El Libro de Piedra" was written by director Carlos Enrique Taboada himself and, as in his previous "Hasta el viento tiene miedo", the story showcases the enormous influence that Gothic novels, particularly "The Turn of the Screw", had in Taboada. As in James' novel, a governess deals with a ghost haunting a child; however, in Taboada's film, the effect of the relationship between the ghost and the child is all the more perverse. Corruption of innocence becomes the main theme of "El Libro de Piedra" as Julia slowly discovers the origins of Hugo and the way he affects Silvia. The way Taboada develops the menace of Hugo is also remarkable, with him initially being just mentioned in talk and later, as the film progress, his presence begins to grow as he takes action. In "El Libro de Piedra", Taboada constructs some of his most memorable and complex characters, taking Gothic archetypes as basis to develop a supernatural family tragedy to which Julia is an unwilling witness.

After the visually expressive "Hasta el viento tiene miedo" and the more character-driven "Vagabundo en la lluvia", Taboada crafts a horror film that showcases him as a more mature filmmaker and that could be seen as the spiritual offspring of those two previous ventures in the genre. "El Libro de Piedra" is subtle and slow, yet enormously atmospheric thanks to the remarkable work of cinematographer Ignacio Torres. Many scenes in the film take place outdoors in daylight, yet even when nature's color is a strong presence, Taboada keeps an unnerving tone of dread constantly through the film. In "El Libro de Piedra", the woods is where evil lives, as a wild force of nature that slowly enters the lives of the characters (pretty much akin to Jacques Tourneur's films, particularly 1957's "Night of the Demon"). As written above, the presence of Hugo in the story grows slow but consistently, and Taboada reflects this on the screen with subtle touches that, though apparently simple, become increasingly unsettling as the film progresses.

As a whole, the cast does a reasonably good job, though it certainly could had been much better. As the governess Julia, Marga López is simply terrific, leading the cast with a strong presence and developing her character with remarkable talent. López conveys a powerful mix of natural delivery and subtly repressed eroticism that adds a lot to her role as Julia, a woman who seems to have sacrificed many things in life to her dedication to educating children. Young Lucy Buj is exceptional as the emotionally withdrawn Silvia, delivering quite a strong performance for a child her age. Unfortunately, Joaquín Cordero feels wooden and stiff in the role of Silvia's cold father Eugenio, and truly feels uncomfortable in the role. Taboada's regular Norma Lazareno is also weak in her performance as Eugenio's new wife Mariana, overacting through the film, as if she was in a whole different tone than the rest of the cast (an oddity, given that she delivered some of her best performances in Taboada's films).

Perhaps the biggest problem of "El Libro de Piedra" is again, the low production values Taboada had for its making, which are even more notorious in this case than in his previous horror films. The art direction, the costume design and particularly the special effects departments look unfortunately cheap, and the overall result feels as if Taboada had been determined to tell the story as he wanted despite his limitations. And certainly, "El Libro de Piedra" is a way more ambitious film than his previous two, which is why these limitations are all the more notorious. Nevertheless, it is Taboada's determination and respect for his story and the horror genre what ultimately helps to overcome the flaws, as the strength of Taboada's vision manages to shine through the movie's flaws. Unlike his previous films, "El Libro de Piedra" is almost void of comic relief, and instead displays Taboada's desire for a truer Gothic horror film that reflected his vision of the genre: horror is supposed to be scary, and evil is supposed to be powerful.

Amongst the four films that make up Taboada's "Gothic cycle", this gem from the sixties is often considered as the best. In all fairness, "El Libro de Piedra"'s status is rightfully deserved, as despite the limitations, director Carlos Enrique Taboada constructs a powerful tragic story of Gothic horror that remains as disturbing as when initially released. Focusing more on the story and its characters, Taboada builds up an ominous atmosphere of dread and delivers in "El Libro de Piedra" a haunting film in which the horror does not come from what's seen, but from the unseen. From an evil hidden deep in the woods, in the stone, in the soul. Truly a classic, and a high point of Mexican horror cinema.