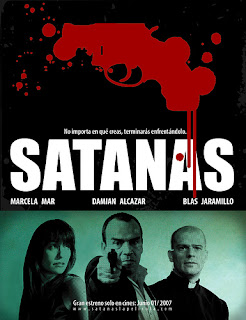 In the afternoon of the 4th of December of 1986, a man known as Campo Elías Delgado arrived to the luxurious Pozzetto Restaurant in Bogotá, Colombia, and after eating, opened fire on the diners in a shooting spree that would later be known as the Pozzetto Massacre. The killing was only stopped when Delgado was shot by the police while he was reloading. It would later be discovered that before the Pozzetto killings, he also had killed three more people, including his own mother. The case shocked Colombia, particularly as the details of Delgado's life began to be made public. Writer Mario Mendoza Zambrano, a former classmate of Delgado, was particularly interested in the case and in the year 2002 published a fictionalized account of Delgado's last days titled "Satanás", in which Mendoza uses the Pozetto Massacre as basis to explore the nature of evil. The novel earned lots of praise in its native country and was soon adapted for a film, which was directed by Andres Baiz and released in 2007 with the same title, "Satanás".

The film opens with a woman named Alicia (Marcela Valencia) who confesses Father Ernesto (Blas Jaramillo) her desire of murdering her children to prevent them the suffering of living in poverty. Father Ernesto tries to comfort her but later, Alicia fulfills her desire, deeply affecting Father Ernesto, who had already in a crisis of faith due to his growing feelings towards his assistant Irene (Isabel Gaona). In the same neighborhood lives Paola (Marcela Mar), a beautiful woman who works at he marketplace, struggling to earn some money. Two friends, Pablo and Alberto (Andrés Parra and Diego Vásquez respectively) propose her to join them in a con to rob wealthy businessmen. Finally, there's Eliseo (Damián Alcázar), a Vietnam veteran and English teacher whom enjoys literature but has never been able to maintain social relationships. Eliseo lives with his mother (Teresa Gutiérrez), who constantly berates his son for his lack of success in life. Eliseo's resentment towards life begins to grow stronger, and his mind is a bomb ready to explode.

Adapted by director Andrés Baiz himself, "Satanás" (literally "Satan") takes several liberties with Mendoza's novel (the main one being the omission of a fourth story, the one of a character named Andrés. It's also set in current times instead of the 1980s), though it remains faithful to the core themes of the story, that is, it's exploration on the nature of evil. The three stories that collide in "Satanás" share the common theme of humanity's inherent evil, with the three characters experiencing different digress of evil, not only in the society they live in, but especially in themselves; not only the evil they suffer or witness, but most importantly, the one they inflict on others. In the story, Eliseo is fascinated by Robert Louis Stevenson's "Strange Case of Dr Jekyll and Mr Hyde", and the novel's theme of duality, of the evil that's hidden inside every person is echoed in the film, not only in the obvious case of Eliseo, but also in the lives of Paola and Father Ernesto. The different degrees in which they succumb to this inherent evil is the focus of Baiz' screenplay.

As a director, Baiz shows a very competent and polished technique, enhanced a lot by the remarkable work of cinematography done by Mauricio Vidal, which captures a city of Bogotá on the verge of becoming a urban nightmare, reflects the inner conflicts of Baiz' characters. Social inequity is another important theme reflected in Baiz' work, as several times he juxtaposes the wealthy neighborhoods of Bogotá with its decayed ones, again as two different sides of the same coin. The differences between social classes play a major role in the three stories, and Baiz handles this without resorting to cheap melodrama, never betraying the dark tone of his story. Baiz' visual style is polished, but now without a certain degree of gritty realism, which comes up as appropriate given the subject matter of his story. His narrative, dealing with three separated but interconnected stories is unfortunately a bit uneven, as while some of the stories are remarkably developed, others seem forced and even disposable.

The acting is perhaps the film's strongest element, as despite the screenplay's problems, the cast makes a remarkable job in their performances. Leading the cast is Mexican actor Damián Alcázar, delivering one of his best works as the disturbed Eliseo (the analog of real life Campo Elías Delgado). Not only Alcázar shows an acceptable domain of the Colombian accent, he creates a complex character that feels so real in his development that it's frightening. Certainly, Eliseo is the kind of character that could had easily been transformed into an over the top caricature, but Alcázar keeps a restrained approach that makes him believable. Equally restrained is Blas Jaramillo's work as Father Ernesto, the tortured priest with a crisis of faith. Jaramillo delivers a pretty effective work which shines particularly in his interviews with the deranged Alicia. The beautiful Marcela Mar plays Paola, and while her character's story is easily the worst developed of the film, she manages to add a good amount of strength and dignity to her poorly written role, and that's quite an accomplishment.

As written above, "Satanás" is built as a three separated story lines that eventually interconnect at some point. The inherent difficulty of this device is that one or more stories may not be as well structured as the others, and that's precisely what happens in "Satanás". While the story of Eliseo is a powerful deconstruction of what could had been in the mind of a seriously disturbed man, the stories of Father Ernesto and Paola are considerably weaker, particularly Paola's which could had been removed entirely from the film without any problem. Father Ernesto's story presents a truly interesting premise, particularly as he begins to be obsessed with the actions of Alicia, the woman he could not help. However, Baiz fails to exploit the potential of the story and, without any sensation of risk or drama, the story ends up as merely anecdotal. Paola's tale on the other hand, seems to be done for the sake of shocking value, as while her descent into darkness is pretty graphic, thematically is pretty shallow and her connection to the other stories is purely coincidental. And not in a good way.

In his feature length debut, director Andrés Baiz shows great technique and a well defined visual style. Unfortunately, his work with the screenplay is a tad uneven, resulting in a film that while remarkable in many aspects, may feel ultimately unsatisfying. Nevertheless, "Satanás" is a debut that shows that Baiz has the potential for greater things. With great performances by its cast (specialy Alcázar's) and a fascinating premise, "Satanás" is a quite interesting thriller that, taking the Pozzetto Massacre as basis, makes a good exploration of a twisted mind. Perhaps the other stories in the film lack power, but the story of Eliseo is so devastating that it alone makes the film worth a watch.