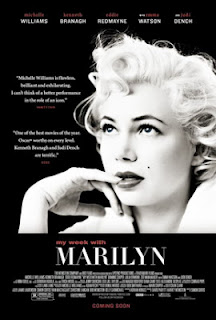 Mythic. Unique. Simply out of this world. The seductive and mysterious figure of Marilyn Monroe is perhaps the greatest icon that cinema has created since its invention. Her meteoric career and sudden death have combined to make of Norma Jean Mortensen (her real name) a modern myth, the perfect embodiment of the dream factory that Hollywood intends to be. A truly pure symbol of the huge impact that cinema has in modern life. And a big part of this myth is to discover just how much of her was the goddess MArilyn and how much was still Norma Jean, the shy and insecure young woman with the dream of being more than a movie star, of being a real artist. This side of her personality is the one seen in the memoirs of Colin Clark, whom in 1957 worked as assistant to Sir Laurence Olivier at the time when Marilyn traveled to the United Kingdom to make "The Prince and the Showgirl". And his cinema memories return now to the big screen with "My Week with Marilyn".

"My Week with Marilyn" tells the story of Colin Clark (Eddie Redmayne), a young man recently graduated from University whose greatest desire is to abandon the life of privilege he has with his parents and enter the film industry. To achieve this, Clark moves to London hoping to find a job at Sir Laurence Olivier's (Kenneth Branagh) production company. Thanks to his perseverance, Clark wins the support of Olivier's wife, Vivien Leigh (Julia Ormond), and his first assignment is to find a house for the star of Olivier's next film: Marilyn Monroe (Michelle Williams). Winning the job of third assistant director, Clark enters the world of cinema, finding himself in the middle of the whirlwind that is the shooting of a movie, where he discovers a different side of Marilyn, one rarely seen by her fans: a fragile and insecure Marilyn who tries to win respect as an actress by facing the royalty of British cinema.

With a screenplay adapted by Adrian Hodges, "My Week with Marilyn" in a way tells two stories at once: the coming of age story of young Colin Clark as he enters the film industry, and the struggle of Marilyn Monroe against the world, against Laurence Olivier, against her fears, against herself. Hodges ties both plots with skill, developing Clark's startup in the industry at the same time that Olivier prepares Marilyn's coming to the United Kingdom. Although, while certainly Hodges offers a pretty interesting perspective of the craftsmanship of filmmaking through Colin Clark's young eyes, in the end it is Marilyn's story what ends up absorbing the other. And this is because Hodges offers a captivating portrait of Marilyn's complex personality. Hodges' Marilyn is a Monroe at the top of her game, she's a star, a goddess, but deep inside, she's still a fragile and insecure actress struggling to win the respect of her colleagues.

A TV veteran (with a filmography that includes popular TV series "Cranford" and one of the better adaptations of Charles Dickens' "David Copperfield"), British director Simon Curtis makes the jump to the big screen with "My Week with Marilyn", in which he revives the moment of the clash between the greatest star of American cinema and the most celebrated actor of the United Kingdom. This clash of personalities, a clash of legends, is the most interesting element in "My Week with Marilyn", because in Curtis' film, the focus isn't exactly in the visual aspect of the movie (though it's worth to point out that the time period is nicely represented), but in his skillful handling of actors. To Curtis, the interest lays in uncovering the human side that's hiding deep inside the film industry, behind the glamour and the make up, and to achieve this, director Simon Curtis has made a movie where the faces, particularly the eyes, speak louder than any any line of dialog.

Naturally, performances become of great importance in this kind of cinema that bases its power in the actor's work, and while there are a couple of tragic exceptions; in general, it can be said that the cast of "My Week with Marilyn" makes a remarkable job. Playing the legendary Marilyn, actress Michelle Williams makes a formidable job in which she brings up the great complexity that her character has. With great talent, Williams revives scenes from "The Prince and the Showgirl", capturing that vibrant magic that Monroe gave to each of her performances, and at the same time, manages to portrait the demons that plagued Marilyn, those that made so difficult for her to create those celebrated performances. Unfortunately, Eddie Redmayne, who plays Colin Clark, is quite below WIlliams' work, delivering a performance so poor that visibly affects the film, as the young actor lacks chemistry with Williams and more than once he looks wooden and weak.

However, Curtis backs himself with a solid supporting cast, where Judi Dench and Emma Watson are specially memorable as, despite having minor roles deliver a first class work of acting. Watson in particular is a more than nice surprise, as she demonstrates that without a doubt she was the more gifted amongst the young cast of the "Harry Potter" series. It's kind of sad that Curtis had not been able to bring out of Redmayne a better performance, as even when he's playing the lead character he ends up easily overshadowed by other cast members. Curiously, this makes an even greater problem to become obvious: captivated by Marilyn's alluring persona, Hodges' screenplay almost leaves totally aside the story of Colin Clark, which ends up like a mere excuse to introduce Marilyn's inner conflicts, where the true soul of the story really is. In a way, this isn't really strange, as after all, she's not any actress, she's the one and only Marilyn Monroe.

In the end, "My week with Marilyn" is a nice exploration of the great cinema icon, Marilyn Monroe, which offers a superb performance by Michelle Williams. It's a real pity that said performance doesn't find echo in a good counterpart from Redmayne, but at least it's surrounded by a group of wonderful supporting actors. While traditional in his vision, Simon's Curts's work allows his cast to show their talents, which is translated in a movie that even when deals with the stuff that dreams are made of, it still very human.In fact, it's this great humanity what sets it apart from other biopics about Monroe, making of this a films that, while imperfect, it's still quite enjoyable. Specially if one's seduced by the magic of the legendary blonde.