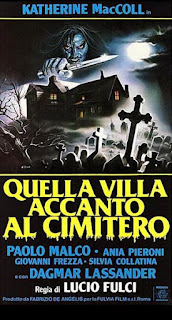 Italian director Lucio Fulci found international recognition with the release in 1979 of "Zombi 2" (also known as "Zombie Flesh Eaters" in the UK), a violent tale of zombie horror that was sold as an unofficial sequel to George A. Romero's classic "Dawn of the Dead" (which was known as "Zombi" in Italy). After this success, Fulci would use the horror genre to explore more complex ideas, related to metaphysics and the after life, resulting in the films "Paura Nella Città Dei Morti Viventi" ("City of the Living Dead") and his masterpiece, "L'aldilà" ("The Beyond"), films that, while dealing with different stories, both explored the theme of portals that communicate between the world of the living and the world of the dead. Fulci would close the circle with a third film, "Quella villa accanto al cimitero" ("The House by the cemetery") in 1981, and while the film returns a bit to a more traditional style of making horror cinema, it also explores a similar theme and completes a thematic trilogy related with death, melancholy and hopelessness.

"Quella villa accanto al cimitero" begins with two deaths: a woman and her boyfriend are brutally murdered in an abandoned house located in New Whitby, Boston. The following day, Norman and Lucy Boyle (Paolo Malco and Catriona MacColl) are in New York preparing their stuff to move, as Norman wants to continue the research that his late colleague, Dr. Peterson, was doing before committing suicide. Their destiny is precisely the house in New Whitby, despite the fact that their little son Bob (Giovanni Frezzi) has warned them not to go, as he has received a strange psychic message from a mysterious girl (Silvia Collatina) telling him there's a grave danger. The family moves anyways, and begin to install themselves in New Whitby. Norman finds out that his colleague was researching on a certain Dr. Freudstein, the old owner of the house the Boyle live now. In the meantime, a young woman named Ann (Ania Pieroni) is hired by Lucy as a babysitter. Strange noises are heard in the mansion, so Norman and Lucy decide to open the cellar; however, this will release the evil locked under the house by the cemetery.

Based on a story by Elisa Briganti (author of "Zombi 2"), the screenplay was developed by Fulci and his regular collaborators, writers Giorgio Mariuzzo and Dardano Sacchetti. As mentioned before, "Quella villa accanto al cimitero" is a more traditional horror film, that leaves aside the oneiric surrealism of the previous films and focus instead on a more linear plot that seemed to mix the classic Gothic horror with the gory violence of Fulci's style. In top Gothic fashion, the film features a family moving to an old house and ending up a victim of the dark secrets that the mansion has buried in its past. And yet, "Quella villa accanto al cimitero" returns to the very same concepts of the Gates of Hell films: again there's a portal that has allowed the crossing of dark forces into our world, though this time they have taken possession of the rotting corpse of Dr. Freudstein, transformed by Fulci's imagination into one of the most iconic monsters of Italian cinema. It's worth to point out that in the screenplay there's a notable influence from the stories by the master of supernatural horror, H.P. Lovecraft.

The influence of Gothic horror that's imbued in the script for "Quella villa accanto al cimitero" can be found as well in the style given by director Lucio Fulci to this film. In this movie, Fulci shows a greater care in the creation of atmospheres and the handling of suspense than in his previous works, and while his taste for gore is still present, in "Quella villa accanto al cimitero" this stops being a gratuitous effect and becomes a quite important element in the characterization of the film's monster. Certainly, there's a great improvement in Fulci's technique, which is made apparent by the great use he gives to the brilliant work of cinematographer Sergio Salvati and the score by Walter Rizzati. Both elements are use to great effect, giving the film an uneasy atmosphere of dread that remains constant ever since the family sets a foot on the Freudstein house. The work of Salvati is worthy of recognition, as he manages to give "Quella villa accanto al cimitero" a very particular look, capturing Fulci's vision of a savage, brutal and oneiric tale of Gothic horror.

As in the previous films in the Gates of Hell cycle, British actress Catriona MacColl appears in a main role, playing housewife Lucy Boyle, who faces the horrors found in the Freudstein's house while his husband Dr. Norman is away. MacColl makes a very good job as Lucy, though maybe not on the same level as her performances in "L'aldilà"; nevertheless, she shows that amongst Fulci's cast, she is one of the most talented members. But if MacColl doesn't shine that much, that's maybe because the main role is for young Giovanni Frezz, who plays little Bob, the psychic kid. The problem with Frezza's performance is that his work is the one that suffers the most problems with the awful work of dubbing done for the film, receiving a voice such annoying and bland that doesn't match his acting. Better luck has Paolo Malco, who makes a good counterpart to MacColl when playing her husband, Dr. Norman Boyle. The beautiful Ania Pieroni appears as the babysitter Ann, but her performance is so poor that seemed to be limited to looking good and recite her lines.

Again it could be said that the acting is the weakest link in this film by Lucio Fulci, however, the problem is not exactly in the acting per se, but in the disastrous work of dubbing done in the film. The core of the problem is that, in those days dubbing was common place in Italian cinema due to the multicultural casts. To Italian producers, it was easier to have each cast member to act in their own language and then to make the dubbing later. For "Quella villa accanto al cimitero", this was tragic, as those who dubbed the child actors Giovanni Frezza and Silvia Collatina doesn't sound really as kids, and instead give their roles annoying voices that do not represent by any chance the work done by the young actors. Adults fare better, but the fact that the kids sound that bad provokes an unintentionally comic effect in what otherwise is a serious horror film. It's sad that this problem has such effect in "Quella villa accanto al cimitero", as even while this is not a revolutionary horror film, it is really one of the best works done by the Italian filmmaker.

Owner of a gorgeous Gothic beauty and a savage gory violence (that made it to be included in the infamous video nasties list in the United Kingdom), "Quella villa accanto al cimitero" is a powerful example of Fulci's craftsmanship at a moment when it was at its best. Certainly, its low budget affects the results in more than one occasion, but Fulci manages to create a tale of Gothic horror with a powerful atmosphere and a brutal climax that make it one of the most interesting movies in the Eurohorror of the 1980s. Of course, the dubbing is awfully bad, but leaving that aside, one can see that Fulci was not merely a commercial filmmaker jumping on the bandwagon of Italian horror cinema, but a truly consummated artist of the genre. "Quella villa accanto al cimitero" closes with style the Gates of Hell trilogy.

Dan Zukovic's "DARK ARC", a bizarre and disturbing modern noir dark comedy called "Absolutely brilliant...truly and completely different..." in Film Threat, was recently released on DVD and Netflix through Vanguard Cinema (http://www.vanguardcinema.com/darkarc/darkarc.htm), and is currently
debuting on Cable Video On Demand. The film had it's World Premiere at the Montreal Festival, and it's US Premiere at the Cinequest Film Festival. Featuring Sarah Strange ("White Noise"), Kurt Max Runte ("X-Men", "Battlestar Gallactica",) and Dan Zukovic (director and star of the cult comedy "The Last Big Thing"). Featuring the glam/punk tunes "Dark Fruition", "Ire and Angst" and "F.ByronFitzBaudelaire", and a dark orchestral score by Neil Burnett.