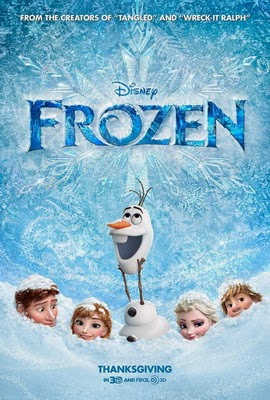 In 1937, Walt Disney Studios changed animated cinema forever with the release of "Snow White and the Seven Dwarfs", their first feature length animated film. This would be the beginning of a long tradition of animated cinema that Disney would develop through the following years, taking inspiration from classic fairy tales to create films like "Pinocchio" (1940), "Sleeping Beauty" (1959) and "Beauty and the Beast" (1991). However, a famous story by Danish author Hans Christian Andersen had eluded Walt Disney almost from the very beginning: "The Snow Queen". Celebrated as one of Andersen's most beautiful tales, "The Snow Queen" would be part of a biopic on Andersen that Walt Disney wanted to produce in 1943, but unfortunately, the project fell down and was eventually forgotten. Years later, the "Snow Queen" project resurrected in the 90s, but once again it was considered too difficult to make. Finally, in 2008 director Chris Buck tried again to make it a reality, and after a long and tortuous process, Hans Christian Andersen's "The Snow Queen" finally saw the light in 2013, as a free adaptation titled simply "Frozen".

"Frozen" is the story of two sisters, Anna and Elsa (Kristen Bell and Idina Menzel respectively), the young princesses of Arendelle, a kingdom located in Norway. Elsa has the incredible magic skill of creating ice out of thin air, but this doesn't stop the young kids from being very close. However, one night Elsa hurts Anna with her powers, prompting her parents to take the drastic measure of hiding Elsa, fearing her powers get too strong for be controlled. Anna's memories of Elsa's powers are also erased, in an attempt to create the idea that Elsa is a normal girl. The sisters are separated, with Elsa hiding herself in the castle fearing that she'll hurt her family with her magic. When their parents die in a shipwreck, Elsa must take the crown as Queen of Arendelle, an event that Anna sees as a chance to discover the world outside the castle. During the coronation, Anna falls in love with prince Hans (Santino Fontana), and wishes to marry him immediately, something that Elsa forbids at once. Anna argues with Elsa about this, and the stress makes her to show her powers to the public. Afraid of herself, Elsa runs away from Arendelle, becoming the Snow Queen.

Far from being a straight adaptation of Andersen's fairy tale, "Frozen"'s screenplay (written by Jennifer Lee, based on a story by Chris Buck, Shane Morris and Lee herself) takes only the core elements from the classic story as the basis for its universe, and then builds up a radically different story from it. Having a family bond between Anna and the Snow Queen, "Frozen" is essentially the tale of two sisters who need to solve their differences in order to recover the happiness they lived in the past. However, "Frozen" is also a story of acceptance, as the screenplay makes of Elsa, the Snow Queen, a complex character who needs to define her identity, tired of hiding who she really is and longing to be allowed to be herself in front of a world that condemns her. This is perhaps the most interesting element in the film, as Lee has created a "Disney princess" (or Queen) like no other, making her a symbol of acceptance of one's own identity (overtones are more than obvious). Anna, on the other hand, is a direct attack to the "Disney princess" stereotype, as she literally discovers that life isn't like fairy tales.

Given the deep involvement of Jennifer Lee during the project's development, she was given the chance of co-directing the film along Chris Buck, and her influence can be felt in every element of the movie. By transforming the Snow Queen fairy tale, Buck and Lee gave a twist to what perfectly could had been just another Disney princess film. Lee's main input was to make "Frozen" a modern film that doesn't hide its own femininity. That is, while Disney had previously released films outside the tradition ("Lilo & Stitch" and Pixar's "Brave" for example), those films protected their mass appeal in the universal theme of family matters. On the other hand, while "Frozen" has at its core a theme of family bonds, the individual development of both Anna and Elsa as grown women reflects an attempt of portraying a modern vision of femininity, attacking the outdated model propagated by Disney's own old classics (The Disney princess ideal). The extraordinary visual design of "Frozen", inspired in those very same classics (chiefly "Sleeping Beauty") makes the reference all the more obvious.

"Frozen", like the afore mentioned Disney classics, is first and foremost musical, so it isn't strange to hear Idina Menzel, a Broadway veteran, in the role of the Snow Queen, Elsa. While certainly Anna is the one leading the plot of "Frozen", Elsa becomes easily the most interesting character in the film. Menzel gives life to Elsa capturing perfectly her mix of fear and (apparently unlimited) power that make the burden of the Snow Queen. This is perfectly exemplified in her performance of "Let It Go", song that defines her character's struggle and reveals her as the story's true protagonist. Kristen Bell plays Anna, whose journey to rescue her kingdom will reveal her that the real world is actually different to the rose-tinted worldview she had as a princess (as a Disney princess). While Bell makes a terrific job as the youthful and cheerful Anna, Menzel's powerful voice outshines her in every way. The rest of the cast is in general pretty good, tough the film clearly belongs to Menzel and Bell. An exception is Josh Gad, whom as Olaf the snowman, manages to steal every scene he's in.

As mentioned before, maybe "Frozen" isn't the first Disney film with a non-traditional focus, however, the artistic quality of Chris Buck and Jennifer Lee's film are what elevates "Frozen" to the level of Walt Disney Animation Studios' true classics. Michael Giaimo's work in the art department is simply overwhelming, creating the perfect atmosphere for the devastating winter of Arendelle, which mirrors Elsa's conflicting emotions regarding her former hometown (Giaimo had previously worked in Disney's "Pocahontas"). Music is perhaps the film's weak spot, as while the film has a couple of truly remarkable song (the aforementioned "Let It Go" for example), the rest of the songs are far from having a similar dramatic impact in the story. Nevertheless, and even when this should be a major problem give the fact that it's a musical, the movie never loses strength thanks to the great care directors Buck and Lee unfold there story. Perhaps the most significative of this is the way in which Buck and Lee get into the character's personal drama, which makes "Frozen" something beyond the traditional adventure film, it makes it feel almost intimate to a certain extent.

Mixture of a return to the traditional and a reinvention of an old formula, "Frozen" takes the best of Disney's animated classics and gives it a more than welcomed modern twist. Still, the most interesting about "frozen" is that it proves once again that behind a great movie, there must be a great story. Jennifer Lee's intelligent screenplay is "Frozen"'s backbone and an instrumental piece in making the movie a reassessment of fairy tales as well as a reaffirmation of female roles in Disney movies. While not entirely without flaws, given its thematics and its enormous visual beauty, it would be fair to consider "Frozen" as one of Disney's most important films of recent times.

Thanks for Sharing With us and I'll be back later for some great information news4andhra.com provides Telugu Movie Reviews and Telugu Cinema News