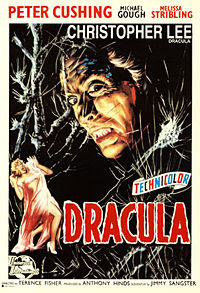 After the enormous success of 1995's classic mix of horror and science-fiction, "The Quatermass Xperiment", the relatively small studio named Hammer Film Productions decided to dedicate most of their productions to the fantastic genres. A sequel to "Quatermass" quickly entered into the studio's plans, but it would be another movie what would become a success even bigger than "The Quatermass Xperiment" and the birth of what is now known as "Hammer Horror": Terence Fisher's "The Curse of Frankenstein". Thanks to its use of vibrant colors and daring (for the time) sexual undertones, Fisher's reinterpretation of "Frankenstein" renewed the interest in horror films and set the basis for a new style of Gothic horror. A style that would be perfected in Fisher's next movie for Hammer, another reinterpretation of a classic of Gothic literature, Bram Stoker's "Dracula".

In this version of the famous novel, Jonathan Harker (John Van Eyssen) is a librarian who arrives to Count Dracula's (Christopher Lee) castle to work. At the castle, Jonathan finds a strange woman (Valerie Gaunt) who asks him to help her escape from Dracula's enslavement. Jonathan agrees, but she is not a normal woman, she's a vampire, an undead creature who preys on humans to feed on their blood. This doesn't surprise Jonathan, as he is actually a vampire hunter determined to kill Dracula, who is an ancient and powerful vampire. Unfortunately, his plan goes wrong and ends up bitten by Dracula, transforming him in the very thing he was going to kill. Days later, Harker's friend, Dr. Van Helsing (Peter Cushing) arrives looking for his friend, but finds him as a vampire and is forced to kill him. However, this is only the beginning, as now Dracula has Jonathan's fianceé Lucy (Carol Marsh) as his next target.

Like "The Curse of Frankenstein", the screenplay for this movie (titled "Horror of Dracula" in the U.S. to avoid copyright infringement with Universal's film) was written by Jimmy Sangster, who makes a considerably different story than the one done in Tod Browning's movie. For starters, this time Van Helsing is not only the one with the necessary knowledge to hunt the monster, but also a proficient fighter and overall a more active character than before. Count Dracula has also been reinterpreted, as Sangster takes the sensuality of the vampire one step beyond, and enhances his aggressive brutality without diminishing the Count's classy elegance. A notable trait in Sangster's script is the considerable amount of development he gives to his characters, as while the plot a bit simplistic, he makes us really care about the protagonists while at the same time making Dracula a fascinating creature.

Once again, Terence Fisher's directing is what elevates this work from a good story to a great movie, as in "Dracula" he seems to take everything that made "The Curse of Frankenstein" a hit to the next level, resulting in the definitive example of Hammer Horror. With Bernard Robinson's beautiful art direction and Jack Asher's excellent cinematography, Fisher creates an atmospheric Gothic nightmare in bright colors that even today remains as fresh and influential as it was the day it came out. Fisher's use of color in horror here is even more calculated, as also uses them to shock and terrify as exemplified by his fixation with the bright red of blood. This time Dracula is a real monster, and Fisher makes sure to make him the ultimate predator, however, his seductive image is kept intact as Fisher plays on the Victorian sexual repression with subversive subtlety.

One of the best elements in this version of Stoker's novel is definitely the acting of the cast, which is for the most part of an excellent quality. The stars of "The Curse of Frankenstein", Peter Cushing and Christopher Lee, appear here in the roles that made them legends. As Dracula, Christopher Lee shows his very powerful presence, making a terrifying portrayal of the undead monster that almost equals Lugosi's classic performance. On the other hand, Cushing truly is the star of the film with the magnificent display of talent he gives as Dr. Van Helsing. Personally I think that nobody has given a better performance as Van Helsing than the one Cushing does in this movie. However, the movie is not only about Cushing and Lee, as Michael Gough truly shines in his role as Arthur Holmwood, Lucy's brother forced to join Van Helsing's battle against Dracula in order to save his family.

The rest of the cast is also excellent, with great performances by Melissa Stribling as Arthur's wife Mina, and the aforementioned Carol Marsh and John Van Eyssen, who make the best out of their certainly small roles. Credit must go to Fisher's directing of his cast as well, as he really seems to get the best out of each one of the actors, making "Dracula" one of the best acted movies of the ones Hammer produced. In fact, if there's a flaw in this Gothic masterpiece, that would be that sadly there isn't enough time to fully enjoy each one of the diverse characters that Sangster, Fisher and the cast have created in this movie. Just like any other story with multiple film versions, it's hard to resist the temptation to pick a "best version" of "Dracula", specially when two highly celebrated films (this one and Browning's) are among those adaptations.

Personally, I prefer Browning's 1931 version over this one, however, Terence Fisher's "Dracula" is a masterpiece of Gothic horror as good as the one by Universal, and my choice is based more on personal preferences than on any superiority in terms of quality. Thanks to Fisher's masterful directing and the amazing performances of its cast, "Dracula", or "Horror of Dracula" as it's known in America, easily ranks among the best movies that came out of the legendary Hammer Film Productions, and simply one of the best horror movies ever made.

Love the Cushing-Lee combo. They were (and are, in Lee's case) masters of their art.