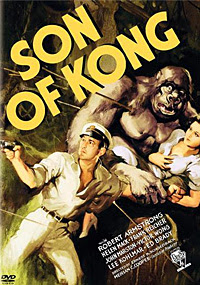 In 1933, Merian C. Cooper and Ernest B. Schoedsack, two former adventurers working in the film industry, created one of the most amazing movies of all time in "King Kong", a grandiose spectacle of horror, action and fantasy about the adventures of a filmmaker (played by Robert Armstrong) in a mysterious island where he finds Kong, a giant ape who is captured and taken to New York in order to be exhibited as "The Eight Wonder of the World". What Cooper and Schoedsack created in "King Kong" was something more than a movie, it was pure magic, as few images in the history of cinema remain as powerful as the scene of Kong standing at the top of the Empire State Building. Given the enormous success of the film, the studios demanded a sequel to be produced immediately, so Cooper and Schoedsack found themselves forced to repeat the hit with a lower budget and tighter shooting schedule.

A month after the events of "King Kong", former filmmaker Carl Denham (Robert Armstrong) is constantly in trouble because of the numerous lawsuits following the destruction that Kong, the giant ape he brought to New York, made during his failed escape. Fortunately, his old friend, Captain Englehorn (Frank Reicher), invites Denham to join his new crew and sail to South Asia, where they can make a living and recover from their financial problems. During one of their trips, they find the man who sold Denham the map to Skull island, Helstrom (John Marston), a former captain who convinces them that there is a treasure in Skull island, secretly planning to steal their ship. Determined to find the treasure, Denham decides to return to Skull island, but the adventure won't be easy, as he'll have to deal with a stowaway girl named Hilda (Helen Mack), Helstrom's evil plans, and the Son of Kong.

Ruth Rose, who wrote the screenplay for the original "King Kong", is also in charge of the screenplay for this sequel, and she keeps exactly the same thrilling mix of genres that made the first one so special. However, there are significant changes in the tone of the film, as in "The Son of Kong" she takes a more lighthearted approach and also makes the offspring of the famous giant ape a heroic character. As odd as it may sound, there's a lot of character development in this movie, mainly in the figure of Carl Denham, who through the movie goes from his well-known ambitious persona to a man who learns to respect the beasts he once considered as nothing more than living gold mines. As in the first film, Rose manages to inject a notable dose of realism to the story despite its fantasy touches, without a doubt the result of her own life as an adventurer along her husband (Schoedsack).

Director Ernest B. Schoedsack returns to the detector's seat in this sequel and once again he gives the movie that gritty realism product of his years as a documentary filmmaker. The amazing special effects by Willis H. O'Brien also return, although due to budget and time limitations, their appearance is tragically limited this time. It is mainly because of this reason that this time the actors receive more chances to show their talents. Schoedsack's directing of his cast is pretty effective, and manages to handle his cast as good as he does his special effects. While Merian C. Cooper limits himself only to produce the film, his taste for magnificent epic action sequences can still be felt in the movie, particularly in the grand finale at Skull island, where he delivers as many thrills as his budget and schedule allowed him.

The acting in "The Son of Kong" is actually effective, and at times even better than the one in the film (granted, Kong was the true star of that classic). Robert Armstrong is wonderful as Carl Denham, making his character's personal transformation a very believable process, as he never loses his wit and charm. Helen Mack is one of the film's highlights as Hilda, as she delivers an excellent performance as the young woman who has lost everything and decides to join Denham's adventure. I'm tempted to say that Mack makes a better protagonist than Fay Wray, but honestly, their characters are too different to compare. As the malicious Helstrom, John Marston is very good, never too over-the-top and surprisingly, very human in his role as the film's "villian". Finally, Frank Reicher gives a dignified performance as the good old Captain Englehorn, making the best out of his role.

Despite its many good elements, "The Son of Kong" often gets labeled as "underwhelming" and receives severe criticism because it fails to live up the expectations the original "King Kong" made. Personally, I think that such criticism, while certainly valid, it's a bit unfair, as considering the limited budget and time that Cooper, Schoedsack and Rose had to complete a new film, the result is of good quality, and while of lesser magnificence, it make a fine conclusion to Carl Denham's story. Even the fact that writer Ruth Rose decided to focus on lighthearted comedy instead of thrilling horror can be seen as a wise move, as it finally gave Kong what many wanted him to receive in the original: compassion. True, it's sad to see a movie with great potential to suffer because of lack of time and budget (O'Brien's special effects get even less screen time this time), but it wasn't really as bad as its reputation says.

While "The Son of Kong" is by all accounts a good and entertaining movie, it certainly pales in comparison with its predecessor's greatness, as "King Kong" casts a shadow that's simply too difficult to overcome. However, if one is willing to forgive the film's problems, one'll find a terrific tale of adventures in the same spirit as the original. This is not "King Kong", but it's still a fun ride.