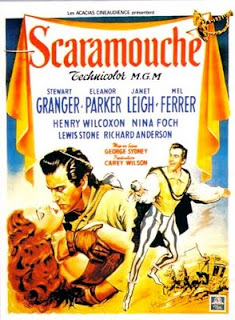 "He was born with a gift of laughter and a sense that the world was mad", such is the memorable line that begins Rafael Sabatini's classic novel "Scaramouche". This novel, a tale of adventure and romance set during the French Revolution and dealing with the exploits of a young lawyer who has to become first and actor and later a swordsman, certainly contained every element to become an instant classic of the genre. Published right when the new art of filmmaking was reaching the maturity of its silent era (1921), it didn't took too long for a film adaptation of the novel to appear, and in 1923 the legendary filmmaker Rex Ingram crafted the first version of "Scaramouche" with Ramon Novarro in the title role and a certain closeness to the source material. 29 years later, director George Sidney took the helm of a new version of Sabatini's classic, with Stewart Granger in the title and a greater focus on what's probably the best remembered part of the novel: Scaramouche's swordsmanship. The result: some of the most unforgettable swashbuckling scenes in cinema.

"Scaramouche" begins when Noel, the Marquis de Maynes (Mel Ferrer) is assigned the task of finding "Marcus Brutus", a writer who distributes pamphlets against the aristocracy. In the meantime, young man André Moreau (Stewart Granger) has just discovered that he is the bastard son of the Count of Gravillac, so he decides to go and meet him. On his way, Moreau finds the beautiful Aline (Janet Leigh) and feels attracted to her, only to suffer an awkward moment when he discovers she is his half-sister. The Marquis finds Marcus Brutus, whom is actually Philippe de Valmorin (Richard Anderson), André's best friend. De Maynes challenges Philippe to a duel, but the inexperienced Philippe is no match for the skilled Marquis. Moreau witness this and feels enraged, but he also ends up disarmed. Managing to escape from the Marquis, Moreau finds the comedy troupe in which his beloved Lenore (Eleanor Parker) performs, and decides to hide there as the character Scaramouche. And as Scaramouche, Moreau vows to improve his swordsmanship in order to avenge Philippe.

Adapted to the screen by Ronald Millar and George Froeschel, this version of "Scaramouche" is certainly far from a faithful rendition of the novel, but still, it actually manages to capture the very soul of "Scaramouche". While Sabatini's novel divides Moreau's story in three separate and well defined parts (as lawyer, as actor and as fencer), Millar and Froeschel combine the last two parts and use it as basis for the majority of the film. Surprisingly, it works remarkably well, as the writers manage to always have something happening in Moreau's adventure, while at the same time remaining true to the character's joyful attitude and idealism. Hardcore fans of the novel won't feel disappointed in this aspect, despite the modifications to the plot. The screenplay contains as well situations that in its time were considered risqué (and gave the movie trouble with the censors), and it is commendable how the writers managed to get away with them. It's also worthy to point out the witty dialogs the screenplay has, and showcases the great comedic timing and skill of the writers.

Lavish would be the best word to describe the beautiful and detailed work of set design and art direction that was done in "Scaramouche". The costumes, the decoration, the sets, it all translates perfectly the atmosphere of pulp romance novel that Sabatini's literary works exude. Director George Sidney makes great use of the production values he has, and with the expert eye of seasoned cinematographer Charles Rosher create a thrilling tale of adventure filled with non-stop action, comedy and romance. Sidney's effective balance of this elements helps "Scaramouche" to never lose steam, and his skillful, dynamic narrative translates the witty, literate screenplay to the screen with a vibrant freshness. However, the real highlight of "Scaramouche" is its now legendary climatic duel, a masterpiece of fencing choreography conceived by fencing master Fred Cavens. Having staged most of the greatest duels in Hollywood history (1926's "The Black Pirate", 1935's "Captain Blood", 1940's "The Sea Hawk", among others), Cavens made in "Scaramouche" his magnum opus.

Leading the cast is Stewart Granger as André Moreau, the happy-go-lucky, relaxed man who must don the mask and cape of Scaramouche in order to hide while his fencing skills improve. Granger has a lot of presence, and manages to transmit the charm and smoothness his character requires. However, Granger is far from being a one-note only buffoon, as he also handles nicely the dramatic scenes. All in all, an underrated lead actor that should get more recognition. Nevertheless, "Scaramouche" wouldn't be the same without Mel Ferrer, as the sadistic, yet chivalrous Marquis de Maynes. With his sophisticated air and touch of perverse maliciousness, Ferrer creates a powerful villain that can be both honestly sympathetic and irremediably hateful at the same time. Janet Leigh adds beauty and charm to her character, the sweet damsel Aline de Gravillac. However, it is Eleanor Parker whom shines the most, as the strong willed Lenore, a character that allows her to showcase her great skill for romantic comedy.

A wild ride filled with swashbuckling action and adventure, "Scaramouche" may not be as famous as the films with Douglas Fairbanks or Errol Flynn but, while it may lack the epic artistry of those films, "Scaramouche" it's definitely in the same league in terms of thrilling fencing action and overall pure entertainment. As written above, major changes were done in the adaptation to film, so those expecting a faithful rendition of Sabatini's novel may find this "Scaramouche" a tad simplified or diluted. However, that doesn't mean that Sidney's film is a different kind of beast, as the soul and essence of Sabatini's legendary character are still intact. Certainly, there is now a greater emphasis on action and comedy, that some characters are now missing and that the drama has been toned down (not to mention that the plot twists were considerably simplified); but in the end, it all feels in the end a simpler, yet more concise narrative. It could be said that "Scaramouche" is classic 50s Hollywood fluff, but it's Hollywood of great class and quality.

The film version of "Scaramouche", like Sabatini's novel that makes its source, is far from being a redefining work of its genre; it doesn't attempt to reinvent the swashbuckling film, nor to create a grandiose work of art. It's only goal is to deliver the best of everything that has made the genre fun. And it achieves this goal perfectly. With its remarkably witty dialogs, non-stop thrilling action sequences, fun screwball comedy and one of the greatest fencing duels captured on film, "Scaramouche" remains true to the spirit of the novel that inspired it and delivers first class entertainment. The gift of laughter that was one of Scaramouche's most noticeable traits, shines intact in George Sidney's version of the classic novel.