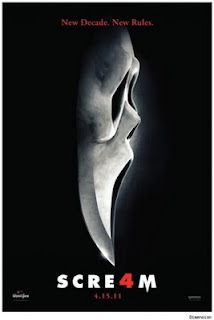 During the first half of the 90s, American horror genre found itself in a slow yet constant process of degradation, wearing itself out with an excessive regurgitation of the themes and plots of the previous decade. The slasher film, which had reigned supreme in the 80s, by the 90s it was reaching the limits of parody after cheap sequels and predictable plots. And curiously, it was parody what essentially saved the genre in 1996, when scriptwriter Kevin Williamson teamed up with filmmaker Wes Craven to produce "Scream", a post-modernist mix of ironic black comedy and graphic violent horror that referenced the history of the horror genre. "Scream" was a huge success and began a renaissance of the American horror. 15 years and two sequels later, Craven and Williamson got together again to resurrect Ghostface and the Woodsboro murders, and once again make an ironic comment about the current state of American horror films, the new multitude of sequels released, and the recent wave of remakes, reboots and "reimaginings".

"Scream 4" begins on the fifteenth anniversary of the original Woodsboro massacre, with the murders of two high school students (Aimee Teegarden and Brittany Robertson). The brutal killings coincide with the return of Sidney Prescott (Neve Campbell) to Woodsboro, in order to promote her book. Being in charge of the case, Sheriff Dewey Riley (David Arquette) asks Sidney to remain in town as she becomes a suspect when crime related evidence is found in her car. However, this is just a taunt by a new Ghostface, who now is not only after Sidney, but also after her young cousin Jill (Emma Roberts). In the meantime, Gale Weathers Riley (Courtney Cox), decides to use the new Woodsboro murders to resurrect her career in journalism, feeling stuck as the wife of a small town sheriff. Gale contacts horror fans Robbie (Erik Knudsen) and Charlie (Rory Culkin), looking for clues about the killer's modus operandi. Robbie and Charlie are convinced that the killer is following the new rules of horror films and is basically remaking the original Woodsboro murders.

The screenplay for "Scream 4" was chiefly written by Kevin Williamson, although an uncredited Ehren Kruger took over for rewrites. Still, "Scream 4" manages to recapture the wit and irony of the first part of the series, balancing effectively the elements of horror, mystery and comedy in a much better way than the bland "Scream 3" (an installment that perhaps took itself too seriously for its own good). The plot twists are plenty, and manage to keep things going at a nice rhythm while remaining true to the slasher formula and paying lovely homage to the horror genre while criticizing the current trends in horror. And this mix of homage and criticism had not worked that well since the original "Scream" (well, "Scream 2" had pretty good moments too). Maybe it's because of how the genre has changed in the last decade, but Williamson's screenplay feels, if not as fresh as the original, at least equally as sharp. As expected, "Scream 4" is pure meta-fiction, and while a tad overdone at times, its self-referential humour works quite well for the most part.

Back in town in Woodsboro is director Wes Craven, who tackles this new venture with his usual technical prowess and domain of the camera. Craven's body of work shows a fascination with modern myths, specially those in small American towns, and so he's right at home in a Woodsboro where the original killings are now deeply rooted in the town's dark mythology. After the poor "My Soul to Take", Craven's handling of suspense is in top form this time, and in "Scream 4" creates quite inventive set pieces in which he masterfully plays with suspense and mystery; toying with the unwritten rules of the slasher sub-genre . His technique may be filled with known tricks and familiar clichés, but Craven's skill lays in putting those clichés to good use, and the film has him displaying this skill at full strength. Instrumental for this is the work of cinematography by Peter Deming (also cinematographer of both "Scream 2" and "Scream 3"), who manages to create the proper atmosphere for the horrors of a small town.

The cast brings back old time regulars of the "Scream" franchise as well as introducing a new generation of characters to the vicious knife of Ghostface. Once again, Neve Campbell returns to Woodsboro as Sidney Prescott, the perennial survivor, whom after years of fighting against the demons of her past, must now face the Ghostface again. Campbell has talent, and certainly knows her character to a tee, although the film doesn't give her enough screen time to let it shine again, as the focus seems changed to the new generation. As her cousin Jill, Emma Roberts is more than adequate, having a strong presence that sets her apart from Sidney's vulnerability. A nice surprise is Courtney Cox, with her character having an interesting development that allows her to show a nicely restrained force in her performance. David Arquette is equally good, showing maturity without forgetting the fun goofiness of his old character. Erik Knudsen, Hayden Panettiere and Marley Shelton are also nice additions to the cast, with Shelton's comedic timing being a highlight of the film.

Unfortunately, not everyone in the film is that effective, and particularly poor are the performances of Nico Tortorella and Rory Culkin, as both seem to be sleepwalking through the film. However, a bigger problem is perhaps "Scream"'s own status as a classic from the 90s. It's hard not to compare (specially when the topic are remakes), and the comparison is not beneficial for this fourth chapter. What hurts the film the most is perhaps that lack of the freshness and vibrant energy of the original. Williamson and Craven are playing in familiar ground, and while this enhances their mastery, it also diminishes how groundbreaking they could be. 15 years don't go in vain, and ironic post-modernism is far from being original. As in part 3, there are times when it could be felt that the "Scream" series has turned into the same thing it criticized in the beginning. Fortunately (and unlike part 3), those moments aren't frequent, and in the end, the film's greatest sin is that its self-referential focus makes it more a film for "Scream" fans than for horror fans in general.

But well, even that's not that much of a bad thing. In fact, it could be said that "Scream 4" offers what the previous installment lacked: a proper conclusion for a horror film. Flawed perhaps, but satisfying indeed. Unlike the original "Scream", maybe this fourth installment will not redefine the rules of horror (at best it'll make fun of them), but it still serves as a reminder of what horror films are about. Beyond the shocking gore, the graphic violence and the outlandish plot twists, the horror genre it's supposed to be fun. It's supposed to be thrilling. And "Scream 4" is exactly that, a thrilling fun movie that once again asks us that old question of life or death: what is your favourite scary movie?