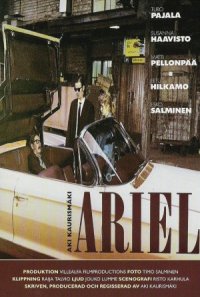 With a calm and candid twist on the romantic comedy called "Varjoja paratiisissa" ("Shadows in Paradise") released in 1986, Finnish director Aki Kaurismäki began to leave his mark in the history of cinema, developing his very particular style of deadpan delivery and ironic melancholy. After making a modern noir reworking of Shakespeare's "Hamlet" in 1987 (titled "Hamlet liikemaailmassa"), Kaurismäki returned to the themes of social alienation and absurd misery that he had previously explored in "Varjoja paratiisissa". The result was "Ariel", the second installment in a thematic trilogy about Helsinki's dispossessed that has been known as "the Underdog Trilogy", "the Losers Trilogy" and more famously, "The Proletariat Trilogy". As those names may imply, the central characters in those films belong to the working class, and their stories explore their struggles in the difficult economic panorama that resulted after Finland liberalized its economy. And all done in Kaurismäki's distinctive brand of black comedy.

In "Ariel", Turo Pajala plays Taisto Karurinen, a chain-smoking coal miner in his 30s who has spent all his life in the rural town where he works. When the mine is closed, Taisto's father (Erkki Pajala), also a miner, gives his 60s Cadillac to Taisto and commits suicide, but not before advising his son to leave the town. Taisto gathers his life savings and heads to the big city, Helsinki, looking for a better future. Nevertheless, the capital doesn't really give Taisto the best of welcomes, as soon after arriving he ends up beaten and robbed. Without job and without cash, Taisto's wanders through the city looking for a job, which he fortunately finds on the docks. Taisto's life then becomes a routine of day labor work and night rock n' rolling at a club, but everything changes when he meets Irmeli (Susanna Haavisto), a divorced mother of a young kid (Eetu Hilkamo) with who he begins a relationship. Seems like luck is finally smiling to Taisto, but things ain't easy for the dispossessed, as soon Taisto gets jailed for a crime he didn't commit.

Written by director Kaurismäki himself, "Ariel" is basically a tale of bad luck as Taisto's life often finds itself set back by the forces he can not control. From the closure of the mine he worked to his arrival to prison, "Ariel" is a story of hopelessness and absurdity at its most Kafkian sense. But unlike the works of the great Austro-Hungarian writer, Kaurismäki's stories are imbued by a bittersweet sense of compassion shaped in the black humor that's deeply rooted in them. There is no pessimism in "Ariel", just a honesty that seems to answer with stoic indifference the many setbacks and bad jokes of life. Taisto, the Kaurismäki anti-hero, finds himself stripped of everything upon his arrival to Helsinki, and yet, in this tragedy he finds himself self-confident for the first time. The self-confidence of someone who has nothing else to lose, and everything to win. With sparse, yet carefully constructed dialogs, Kaurismäki builds up a set of unforgettable characters that become the heart of this relatively simple story of love, crime and bad luck.

As a director, Aki Kaurismäki refines the stark visual style of "Varjoja paratiisissa", which in its austerity contrasts the harsh and cold atmosphere of Finnish urban landscape with the warmth that brings the people who live in it. There's a greater emphasis in the film about the state of Finnish economy, not explicitly stated, but implied by the subtleties of the characters' actions (and emphasis not found in the other films of the Trilogy). Kaurismäki's regular cinematographer, Timo Salminen, captures the bleakness of Helsinki's streets and nightlife, and nicely frames the hopelessness of Taisto's struggle. Salminen finds a strange beauty in the alleys, bars and docks of Helsinki, that shines naturally, without idealizing them. Kaurismäki's narrative is more polished than in his previous film, perfecting the slow pacing and the deadpan delivery of his comedy. Certainly, his timing is more precise this time, as in "Ariel" there's a greater emphasis on finding the humorous side of the absurdities of life.

Acting in the film is of great quality, with Turo Pajala leading the cast perfectly capturing the spirit of Kaurismäki's style. With great ability, Pajala manages to deliver his character's stoicism with enormous subtlety and style. There's a great naturalness in Pajala's performance that helps to make easier to enter into Kaurismäki's style. Subtlety is the key in Pajala's performance, and it's remarkable what he achieves with minimalist gestures and strong delivery. Unfortunately, Susanna Haavisto isn't that lucky, and her performance as Taisto's love interest, Irmeli is just average. Instead of subtle, she feels a bit forced and artificial in her delivery. Kaurismäki's regular Matti Pellonpää appears as Mikkonen, a convict who helps Taisto to break from prison. A familiar face in Kaurismäki's body of work, Pellonpää once again makes a good performance, perhaps a tad limited by the seriousness of his character, but ultimately fitting as a counterpart to Taisto's naiveté.

The rest of the cast is effective, and particularly worth of notice is young Eetu Hilkamo's performance as Irmeli's son Riku, who truly steals every scene he is in. All in all, "Ariel" is a strong entry in Kaurismäki's cinema, a mature work that displays a more developed stage of the minimalist style that the Finnish filmmaker had been experimenting since his debut. All of Kaurismäki's themes and obsessions appear in "Ariel", from its absurd take on irony, to its depressive working class setting, it's all there, as a statement of the direction that Kaurismäki was heading his work at that point. And for this reason, the same problems present in his cinema appear again in "Ariel", particularly the difficulty that may present his offbeat and highly idiosyncratic deadpan comedy. Deliberatedly slow and contemplative, the stark minimalism of "Ariel" could be off-putting to audiences expecting a more traditional comedy. It's certainly, an acquired taste. Nevertheless, "Ariel" has in Turo Pajala an actor with enough charm to make all work.

Taisto's journey, from his rural town to the depths of prison, isn't really any different from an epic adventure of grand scale. The hero of the tale still must sort out all kind of problems and win the favors of goddess Fortuna. The minimalist scale of this epic is only representative of what's probably the core of the Proletariat Trilogy: surviving this life is already a matter of heroism. The misadventures of Taisto, product of an apparently interminable streak of bad luck, feel all the more realist and human. Without cheap philosophy or arrogant pretentiousness, in this second exploration of the world of the dispossessed director Aki Kaurismäki uncovers the bittersweet glory of the common man.