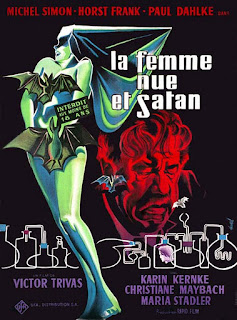 After World War II, cinema in Germany, like many other industries, entered into a difficult period of reconstruction during the occupation of Germany by the Four Powers. The Federal Republic of Germany, or West Germany, had now access to cinema from around the world, and the American industry saw this as an opportunity to conquer the new market. Another problem for the film industry of West Germany was the fact that most of the country's film infrastructure, the legendary UFA studios, were in East Germany. Still, by the 1950s the film industry of West Germany kept a slow but consistent recovery, though it mainly produced what was soon called the Heimatfilm ("homeland film"), a very German genre of family dramas. The great popularity of these films gave the impression that the cinema of West Germany was a very provincial industry, though there were exceptions. An notable exception to this norm was "Die Nackte und der Satan", an offbeat horror film with a distinctive style echoing the glory days of German Expressionism.

In "Die Nackte und der Satan" (literally "The Naked and the Satan", but known in English as simply "The Head"), Michel Simon is Dr. Abel, a famous surgeon who has developed a serum that keeps alive dead tissue. However, Dr. Abel isn't that well and requires a heart transplant. His team, comprising Dr. Ood (Horst Frank) and Dr. Burke (Kurt Müller-Grad), is set to perform the operation. Unfortunately, things go awry with the transplant, but Dr. Ood decides to keep going. Dr. Burke protests but is murdered by the sinister Dr. Ood, who then proceeds to decapitate Dr. Abel in order to keep his head alive with his serum. The mad Dr. Ood is decided to help Irene Sander (Karin Kernke), a young hunchbacked lady he desires. To do it, Dr. Ood will perform a head transplant using the technology developed by Dr. Abel, who witness everything, horrified as he finds himself without a body. Lilly (Christiane Maybach), a dancer at the Tam-Tam bar, is the selected candidate to become the new body for Irene.

Written by Victor Trivas (who also penned Orson Welles' "The Stranger" and was nominated for an Academy Award for it), "Die Nackte und der Satan" certainly has an outlandishly grizzly premise. With its themes of head transplant and the isolation of a living head, it's difficult not to compare Trivas' story to the cult classic "The Brain that Wouldn't die" (1962); however, there's a great difference in tone between both films, as unlike its American counterpart, Victor Trivas' "Die Nackte und der Satan" is played as a more serious affair. The theme of degenerate human experimentation resonates strongly, with the duality of having the beneficial healing of Irene being grounded on the vicious actions of Dr. Ood. Duality is also present in Lilly, a beautiful model with a dark past akin to the classic archetype of a femme fatale. There's also, a greater emphasis on eroticism in the story that's surprisingly daring for its time, making of "Die Nackte und der Satan" a sexually charged thriller underneath its horror visage.

Also directed by Victor Trivas (who had not directed a film since 1935), "Die Nackte und der Satan" has a decidedly somber atmosphere, enhanced by a visual aesthetic that's reminiscent of the years of German Expressionism. This is not surprising, given that collaborating with production designer Bruno Monden was Hermann Warmm, the man responsible for the striking look of classics of the movement such as "Das Cabinet des Dr. Caligari" and "Der müde Tod" (not to mention Dreyer's "Vampyr"). Through the camera of Georg Krause (another veteran of German cinema), director Trivas creates a moody piece that feels delightfully straight from a pulp novel. Despite their relative low budget, Trivas and his crew achieve in giving the film a dark beauty that fits nicely with its bizarre premise. Like the screenplay, Travis doesn't play his story for cheap thrills, and opts for a serious, darker approach that gives the movie an unsettling tone, enhanced by the surprising (considering the low budget) visual effects by Theo Nischwitz.

The cast in "Die Nackte und der Satan" is actually good, with Horst Frank delivering a strong, retrained performance as Dr. Ood. Crtainly, the character is the archetypal mad scientist of horror films, but Frank doesn't let himself loose with it and instead begins to build up the raving madness of Dr. Ood with welcomed subtlety, until the climatic ending. In her debut, Karin Kernke is for the most part good, as Irene, though oddly, she seems to lose her edge when her body is revealed. German sex symbol Christiane Maybach is quite natural and vibrant as Lilly, channeling bits of Marlene Dietrich's hardened persona in her persona. Nevertheless, perhaps the greatest surprise in "Die Nackte und der Satan" is to see legendary French actor Michel Simon (famous for Renoir's "La chienne" and "Boudu sauvé des eaux", as well as Vigo's "L'atalante") playing the kind Dr. Abel, reduced to just a head by Dr. Ood's evil. Simon is effective, though certainly his work is limited due to the real paralysis he suffered at the time of shooting.

In many ways, "Die Nackte und der Satan" feels out of time, not in tune with the cinema of the 1950s, but imbued by the atmosphere of a bygone era. The expressionist set design, the pulp novel atmosphere, the amorality of the characters, the theatrical acting; by all accounts the film could had been done in 1931. The presence of Michel Simon, Warmm and Krause just seem to confirm this, and this plays like a double-edge sword for the film, as while it gives the movie a nice ominous atmosphere, it also gives it an archaic visual look, as if it was a movie released 40 years too late. Nevertheless, this is not to say that the film is entirely stuck in the past, but it's definitely not exactly avant-garde anymore. Also, the fact that the film was done with a limited budget also plays a major role in the final result, as the film's shortcomings are enhanced by the lack of production values. Though production designer Hermann Warmm was not unfamiliar with budgetary limitations, the visual look is a tad cheapened by this.

In the end, it's hard not to think about "Die Nackte und der Satan" as something other than as an offbeat curiosity. With its heavily expressionist design and the ominous atmosphere it conveys, "Die Nackte und der Satan" is an interesting discovery for fans of German Expressionism. The serious approach that director Trivas takes on the story, results in a quite different film that could be expected given its strange premise, and actually plays like an intellectual version of one of those Mad Scientist horror films of the 30s. Decidedly a truly atypical entry in the cinema of west Germany of the 1950s, "Die Nackte und der Satan" is a tale of grizzly body horror that feels frozen in time. A bizarre curiosity, old fashioned perhaps, but bizarre indeed.