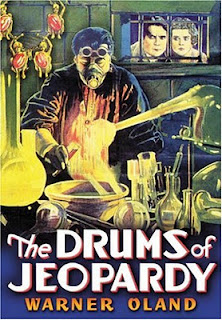 Though nowadays the name of Harold MacGrath is not exactly well known, during the first decades of the twentieth century he was one of the most popular authors in America. A regular collaborator in several of the major magazines of his time, MacGrath was also one of the first famous authors to write specifically for the big screen, like the lost film "The Adventures of Kathlyn". Such was MacGrath's popularity that several of his short stories and novels were also adapted to Broadway plays and movies. The 1920 novel "The Drums of Jeopardy" is one of the best examples of this, as only two years after its publishing, the novel became a stage play in 1922, and a film in 1923. Nevertheless, nowadays this work is perhaps best known for having its villain's name based on the artistic name of a young British actor who didn't want to be recognized as William Henry Pratt, but as Boris Karloff. Incidentally, in 1931, less than a year before "Frankenstein" made Karloff a superstar, a new version of "The Drums of Jeopardy" was released.

"The Drums of Jeopardy" begins in Czarist Russia and is the story of Dr. Boris Karlov (Warner Oland), a scientist who discovers that his daughter Anya (Florence Lake) has been dishonored by a nobleman and decided to take her life. Vowing vengeance, Karlov discovers that the responsible is a member of the Petroff family, and decides to destroy them. Time goes on and the Bolshevik revolution takes place, the Czars' rule comes to an end and with that the noble families of Russia are being hunted, so the Petroff family has gone to America on exile. Karlov, now a prominent Bolshevik leader, finds and murders the older Petroff, so the two younger brothers, princes Nicholas and Gregor (Lloyd Hughes and Wallace MacDonald respectively) are taken to the mansion of Kitty Conover (June Collyer) to hide under the protection of agent Martin Kent (Hale Hamilton) of the Secret Service. Each time a Petroff is about to die, he receives from Karlov one of the fabled Drums of Jeopardy, cursed gems that signal their doom.

Adapted to the screen by Florence Ryerson (whom years later would be one of the driving forces during the writing of "The Wizard of Oz"), this version of "The Drums of Jeopardy" is a mash up of genres that works like a film divided in two very clearly defined halves. The first half works like a tale of adventure, with Karlov hunting down the older Petroffs mercilessly; while the second half deals with the events that take place inside the mansion, essentially transforming the story into a murder mystery of the style that was so popular at the time. However, what perhaps is the greatest merit of "The Drums of Jeopardy" is its construction of the villain: Dr. Boris Karlov is driven by vengeance, and his thirst for blood transforms him into a quite sadistic foe. Nevertheless, while the character may be drawn as a caricature of a communist, his motivations are still "noble". While not entirely the sympathetic villain that Universal studios would perfect later, at times it kind of points into that direction.

Seasoned veteran George B. Seitz is the man at the helm of "The Drums of Jeopardy", and the fast-packed first half of the film does show Steiz' particular expertise gained crafting adventure serials during the silent era. In simple, yet effective set pieces, Seitz gives life to the threatening menace that Dr. Boris Karlov should represent to the Petroffs, and transforms him into a presence that seems to lurk around every corner. Seitz unfolds his film with a fast, appropriate pace, though later the rhythm slows down perhaps a bit too much for its own good during the second half. While owner of a style that put more emphasis on practicality than on artistry, Seitz does manage to create an entertaining film that makes great use of its budgetary limitations. The cinematography of Arthur Reed (who would make a prolific career in B-movies) has some nice touches, particularly during the second half, which takes place in an old dark mansion and his playing with light and shadows comes handy.

The cast is for the most part good, though it's certainly Swedish actor Warner Oland who's got the best role. As Dr. Boris Karlov, Oland hams it up perfectly, as the role of sympathetic villain allows him several dramatic moments of great quality. Nevertheless, Karlov is also a sadist, and Oland manages to make him creepier by restraining his act at the appropriate moments. It's certainly one of his best performances, as despite not being a complex role, Karlov is a character that allowed Oland to explore different sides of a villain character. As Nicholas Petroff, Lloyd Hughes is appropriate, though not particularly surprising in his turn as the hero of the film. However, his counterpart June Collyer is also another highlight of the film, easily overshadowing Hughes, and every other actor in the film, with the exception of Oland. The rest of the cast ranges from mediocre to good, though it's interesting to see Mischa Auer in an early role as one of Karlov's henchmen.

While at first sight it could seem that the only thing that "The Drums of Jeopardy" has to offer is the curious trivia of Karlov's name, it is actually an entertaining thriller that combines with a certain degree of success aspects of adventure serials and the murder mystery subgenres. While the novel has Karlov as an evil Bolshevik kind of character (and director Seitz plays on this by having Oland look like a mix of Lenin and Stalin's images), the screenplay of Florence Ryerson has a certain degree of empathy towards the character, that makes this mad scientist closer in spirit to the Frankenstein monster than to the Fu Manchu kind of character he is supposed to be. And it's in this aspect where Oland's performance finds a gold mine to exploit. One could only wish that "The Drums of Jeopardy" had been executed by most daring hands, as Seitz' directing, which opts to play it simple, doesn't seem to take full advantage of the material he had to work with, and it's perhaps the reason why the film feels more like a missed chance than like an entirely satisfying experience.

Certainly, "The Drums of Jeopardy" has not aged well, specially when one considers the films that were released merely months after it. Universal Studios would change the history of horror cinema with "Dracula" and "Frankenstein", and the world would be introduced to a new style of monsters. Gone were the days of murder mysteries and mastermind criminals (at least in major films, as b-movies would continue churning this kind of films for another decade), and it was now the birth of the movie monster. Films like "The Drums of Jeopardy" were soon forgotten, though in the case of this film, perhaps it would be nice to rediscover this product of its time. If only, to enjoy the remarkable work of June Collyer and Warner Oland.