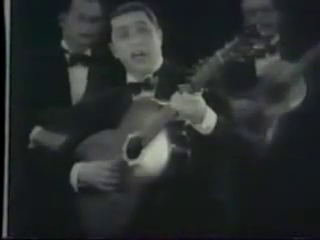 Certainly, one of the greatest figures of Argentina is without a doubt singer, songwriter and actor Carlos Gardel. The most prominent figure in the history of Tango revolutionized the culture of his time that despite having died tragically at the height of his career (in a plane crash), his name is the one most often associated with the culture and music of Argentina. Born in 1890, Gardel arrived to Buenos Aires at a very young age, and grew up in the Abasto neighborhood. Like many singers of his time, Gardel began his career working at bars, but soon his singing talent and charming look took him to the studio to make recordings in 1917. That very same year cinema found Gardel, and his talent made its way into the film "Flor de Durazno". Naturally, Gardel's career on cinema didn't make much progress in the silent era, so he focused on singing. However, by 1930 sound in film was now a reality, and so Gardel and cinema met again, in an early series of musical short films directed by sound pioneer Eduardo Morera.

"Yira, yira" (often known in English as "Go round... and round...") is one of those musical shorts, which basically consisted in an introduction to the song and then the execution of the song by Gardel himself. In the case of "Yira, yira", the introduction is done by Gardel and the song composer, the legendary Enrique Santos Discépolo (at the time a young 29 years old man), with Gardel asking Enrique Santos about the meaning of the song. Enrique explains Carlos that the song is about despair, hopelessness and loneliness; to which Carlos answers surprised that such is the feeling he had received from the song. Enrique praises Gardel's singing, though Carlos wonders with a little naiveté if the song's main character is a good man despite the brooding tone. Enrique makes a joke about it, which Carlos doesn't seem to catch at first, though he later does and both men laugh. The film then cuts to Gardel's interpretation of Santos Discépolo's "Yira, yira", with a musical group.

As in most of Morera's shorts, the centerpiece of the film is Gardel's singing "Yira, yira", however, the introductions to the songs, while probably scripted by Morera or Gardel, give a glimpse of the magnetic personality that the famous singer had. In the case of "Yira, yira", the introduction is twice interesting as it showcases Enrique Santos Discépolo, the composer of this popular tango. Whether the dialogs recited were scripted or are in fact improvised is sadly not known, though two things can be noted in the film: the great camaraderie and respect between both artists, and the natural charm and ease in front of the camera that Gardel displays. It's clear that both Morera and Gardel understood very well the possibilities of the film, and thus the image of the singer is carefully detailed in the brief introduction. Gardel is shown as a humble singer, respectful of the composer, and owner of a child-like curiosity. The fact that Morera makes the joke be on Gardel is part of this: Gardel owns the spotlight, but he shares it willingly with his friends. With his people.

Now, the interpretation Gardel makes of "Yira, yira" is one of his best, capturing in his performance the very same feeling of despair and loneliness that Enrique Santos Disépolo was explaining in the introduction. The touch of irony that the song has is not lost, though perhaps a bit diminished by Gardel's strongly melancholic performance, which adds a bit of optimism to the song. Tango singing (specially of Gardel's time) often requires a bit of dramatic emphasis on the voice, not only because of its common themes of loneliness and lost love, but also because of its very rhythm. In this aspect, Gardel delivers a masterful performance, and "Yira, yira" proves that Morera wasn't wrong when he decided that no matter what may had happened in the failed experience of "Flor de Durazon", Carlos Gardel was truly worthy material for cinema. In the introduction, Carlos Gardel wonders if the character is a good man. In his performance, it's clear that when Gardel sings it, the brooding main character is a good man indeed.

As expected from an early experiment in sound film, Morera's set up is fairly basic, with cinematographer Antonio Merayo framing both scenes (introduction and performance) in a simple yet effective manner. Certainly, Merayo's work is much more interesting when Gardel is singing, though that's perhaps the result of a directorial decision rather than a flaw on Merayo's side. "Yira, yira", along nine other of Morera's short films were later compiled in 1931 to form a longer movie called "Diez canciones de Gardel" or "Encuadre de canciones" (literally "Ten songs by Gardel" or "Assortment of songs"); however, Morera's shorts work much better on their own, as they were intended to be. In this aspect, Morera's Gardel shorts can be seen as precursors of modern music videos. Given the quality of Gardel's performance, and the fact that Morera's succeeded in what he was set to achieve (to prove Gardel could be a major film star), it can be said that his humble experimental short films more than fulfilled its goal.