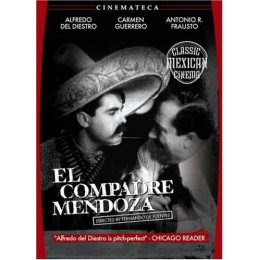 Director Fernando De Fuentes' films about the Mexican Revolution are often recognized as classics in the history of Mexican cinema, and not without a reason, as not only they meant a big improvement in the artistic and technical levels, they showed a brave criticism of the often idolized Mexican Revolution. Of the three movies (which by the way, are related only in themes and setting), "El Compadre Mendoza", is widely considered as his best by many critics and historians, as it is not only a film of great artistic value, but also one of the movies where De Fuentes better employs a genre (melodrama in this case) to expose his interesting opinions about the Revolution as a social movement. However, it's worth to point out that this movie wouldn't have been possible without the economic success of his previous film, "La Calandria", starting De Fuentes' uneasy relation with box office results and his dependence of commercial movies to finance his most personal films.

"El Compadre Mendoza" is the story of Rosalío Mendoza (Alfedo del Diestro), the owner of a hacienda who has managed to keep his business during the Revoultion by winning favors from both sides. Helping both the Federal forces and the revolutionaries, Rosalío makes friends with both sides' generals and feeds their armies, however, his situation gets complicated when his friendship with Revolutionary general Felipe Nieto (Antonio R. Frausto) begins to grow more than he expected after Nieto saves Mendoza from a sure death the day of his wedding. General Nieto becomes such a good friend of Rosalío and his wife Lolita (Carmen Guerrero) that Rosalío asks him to be the godfather of his son, sealing their friendship by becoming Compadres (literally "co-fathers"). However, their friendship will be put to the test and Rosalío will have to make difficult choices when his friends in the Federal army discover that their biggest enemy, General Nieto, is Rosalío's Compadre.

It's worth to point that this movie marked the debut in films of two important writers who would later become legends themselves: Juan Bustillo Oro and Mauricio Magdaleno. "El Compadre Mendoza" was originally a short story written by Magdaleno that was meant to be adapted to theater by Bustillo Oro, but the two were convinced by De Fuentes to make the story a movie instead of a play. While set during war time, "El Compadre Mendoza" is not exactly an action movie, as it's more a drama about civilians caught in the middle of the conflict, and the difficulties of keeping friendships when loyalties get compromised because of the war. The plot is probably predictable as it follows the classic patter of tragic melodramas, but the excellent way the story unfolds and the remarkable development of the characters' personalities do make a difference between this film and other similar ones.

Not only Juan Bustillo Oro was in charge of the screenplay, he also shared the directorial seat with Fernando De Fuentes making his "official" debut at the job (he had only directed a short silent film before). This collaborative work proved to be enormously influential to both parties, as Bustillo Oro's experience in theater resulted in invaluable lessons for De Fuentes' direction of actors, making a notable improvement from his work in "El Prisionero Trece". In the same way, De Fuentes' mastery with cinematography and montage became a huge influence in Bustillo's later directorial work. "El Compadre Mendoza" shows the first success of this partnership, as it combines perfectly a wonderful visual style with a constant respect for the plot, keeping a balance between both aspects of cinema without one overriding the other.

In a character driven movie, the performances by the actors are of extreme importance, and in "El Compadre Mendoza" the couple of directors truly made the best of their talented cast. Once again, Chilean actor Alfredo del Diestro leads the cast as Rosalío Mendoza, delivering the performance of his lifetime as the troubled man caught between both sides. Del Diestro is simply top notch in the complicated role and carries the film with his powerful presence, making very easy to feel identified with the character. As the idealist General Nieto, Antonio R. Frausto is very effective, and his performance feels really natural, specially as his character becomes more complex as the movie flows. The same can be said about Carmen Guerrero, who despite being a bit overshadowed by her two costars, manage to deliver her lines with grace and dignity.

Among the films of De Fuentes' trilogy, "El Compadre Mendoza" is definitely the one which more easily one can feel identified with, as while the other two movies deal with the armies that fought in the war; this movie takes the the civilians who were caught in the middle of the conflict as main subject. Like in the other movies, the harsh criticism to the Revolution is present, as the theme of the movie is how war manages to corrupt and destroy everything, even something as valuable as friendships. Still, despite the strong moral message of the movie, De Fuentes avoids a heavy handed approach and deals with his themes in a subtler, more appropriate manner. Finally, if the movie has any flaw, is probably its low budget and the bad performances of some of the extras, other than that it's almost flawless.

Regarded by many critics as De Fuentes' best work, "El Compadre Mendoza" lives up to the high expectations build up around it and truly deserves its title of "Mexican classic". While personally I consider "Vámonos con Pancho Villa" as De Fuentes' best movie, this is a close second and probably his most personal work. An interesting take on the Mexican Revolution, "El Compadre Mendoza" is a must see for anyone interested in Mexican cinema. After this movie, the status of De Fuentes and Bustillo Oro as legends of Mexican cinema was a sure thing.