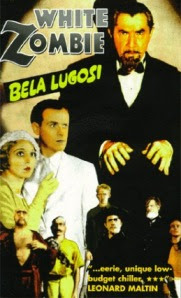 One of the most important names in the history of the horror genre is without a doubt, Bela Lugosi, the Hungarian actor who in 1931 became an icon after playing the legendary Count Dracula in Tod Browning's adaptation of the film. Thanks to the powerful presence he gave to the elegant vampire, Lugosi became instantly famous and a major star for Universal Studios. Sadly, due to his heavy accent Lugosi wouldn't have much luck in finding roles for him, and eventually became type-casted as the obvious choice for playing sinister and classy villains in horror films, a problem that would take him from making movies for big studios to acting in low-budget independent films. However, the fact that such movies weren't big productions didn't mean that they were bad films, and this 1932 film is probably the best proof of that, as "White Zombie" is a classic as important as any film done by Universal in those years.

In "White Zombie", Neil Parker (John Harron) and his fianceé Madeline (Madge Bellamy) are traveling to a plantation located in Haiti to celebrate their wedding. Charles Beaumont (Robert Frazer), the owner of the plantation, invited the couple to his house after meeting them on a cruise ship during one of his travels, and not only he offered his plantation for the party, he has also offered Neil a highly profitable job in the island. However, there is a sinister purpose behind Beaumont's apparent good nature and friendly attitude: he is madly in love with Madeleine and plans to separate the couple before the wedding. To do this, he has asked the help of a man named Legendre (Bela Lugosi), a Voodoo sorcerer with the ability to create and control zombie slaves. But the zombie master has his own plans for the trio's souls.

Written by Garnett Weston, "White Zombie" is a very dark and atmospheric tale of horror and suspense partially inspired by the writings of traveler W.B. Seabrook, whose 1929 book, "The Magic Island", introduced Voodoo to American audiences. Of course, Weston's movie is a highly fictionalized account of Voodoo, but it was probably the first movie to introduce zombies to the horror genre. With a story that mixes romance, horror and melodrama, "White Zombie" is essentially a Faustian tragedy with a Voodoo setting, where a man's forbidden desire brings damnation to him and those around him. There is not really a lot of character development through the film, but that actually helps as "White Zombie" is more about the nightmarish experience of the three characters facing Legendre's sinister machinations than about their relationships.

The film's highlight is certainly Victor Halperin's directing, which in its cinematography (by Arthur Martinelli) shows a lot of influence from the German expressionist movement of the 20s and gives the movie an ominous surreal atmosphere. Due to the film's scarce use of dialogs, it would be easy to believe that Halperin wasn't interested in sound technology (new at the time), however, he does give an interesting use to sound in this film by using atmospheric sounds and Xavier Cugat's score to enhance the film's eerie ambiance. It is clear that Halperin was working on a very low-budget (sets were rented from Universal Studios), but his inventive use of camera effects together with Martinelli's beautiful cinematography truly give the film a special nightmarish look similar to Browning's "Dracula" or Dreyer's "Vampyr - Der Traum Des Allan Grey".

The acting is for the most part effective, although several members of the main cast give average performances that tend to diminish the power of the film a bit. John Harron is one of them, delivering a really weak performance as Neil, a shame as his character is essentially the story's protagonist. Robetr Frazer is a bit better as Charles Beaumont, although like Harron, he could had done a better job than the average performance he gave. Still, Madge Bellamy is remarkable as Madeleine, and is specially dreamy after falling under Legendre's spell. Now, if Bellamy is excellent in her role, Bela Lugosi is simply perfect as the macabre zombie master Legendre. Taking what he did in "Dracula" one step beyond, Lugosi appears here in what is probably one of the best performances of his career, literally becoming this embodiment of evil with his strong presence and sinister elegance.

Like the previously mentioned film "Vampyr", Victor Halperin's "White Zombie" seems to be a literal bridge between silent films and the sound era, as it keeps a lot of the silent style of film-making including the highly expressive acting and the expressionist visual design. Together with the movie's extremely slow pace, those elements enhance the whole surrealist vibe that surrounds the movie, making it look almost as the representation of a nightmare. However, this is a double edged sword, as certainly those elements may disappoint those expecting something more graphic and action-packed (it is nothing like the modern zombie films of Romero and Fulci), or at least, something similar to Universal's "Frankenstein"'s series. Don't get me wrong, this is still Gothic horror at its best, but it's definitely on a more serious tone than most Universal films.

"White Zombie" is a difficult film to watch, but certainly one that's very rewarding in the end. Its silent style feels definitely dated, but oddly, this only adds to that surreal atmosphere that Halperin was aiming for when making the film. Sadly, director Victor Halperin would never reach the mastery of this work, as if this was the movie he was destined to make. A very underrated classic of horror, "White Zombie" is another of the films that prove that there was more in Bela Lugosi than "Dracula", and it's a film that can proudly stand next to the Universal classics despite its modest and humble origins.