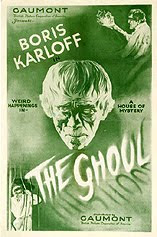 In 1909, British actor William Henry Pratt traveled to Canada looking for fame and fortune on stage. A relative of members of the British foreign service, Pratt decided to change his name hoping to prevent embarrassment to his family, and the name he took would become legendary: Boris Karloff. Eventually, Karloff made it to films, establishing a career as character actor until success came with Universal Studios' classic, "Frankenstein" in 1931. Almost instantly, Karloff became an icon of the horror genre, and his career rose to new levels. It was in this moment when he returned to the United Kingdom to make a horror film: 1933's "The Ghoul", a movie that was considered a lost film for decades until a pristine copy was finally found in recent years. After all those years spent in the dark, expectations about the film are definitely high, specially when it's a film where Karloff once again shares the screen with his "Bride of Frankenstein" co-star, Ernest Thesiger. All those factors make "The Ghoul" quite an interesting film to see.

In "The Ghoul", Boris Karloff plays Prof. Morlant, a famous Egyptologist who has dedicated his life to collect religious artifacts from Ancient Egypt. On his deathbed, Morlant has faith in the power of "The Eternal Light", a mysterious medallion that he wants to present to the Egyptian gods after death. Morlant asks his butler, Laing (Ernest Thesiger) to wrap the medallion in his hand, and promises that if anyone betrays him, he'll return from the grave for revenge. Morlant's threat is not without a reason, because he knows that people will be after the powers of the eternal light. And his fears become true when his lawyer Broughton (Cedric Hardwicke) enters his house. Morlant's heirs Betty Harlan (Dorothy Hyson) and Ralph Morlant (Anthony Bushell) also arrive for the reading of the will, as well as Nigel Hartley (Ralp Richardson), a parson who used to visit Morlant trying to get him back into the Christian faith. On top of that, Egyptians Aga Ben Dragore (Harold Huth) and Mahmoud (D.A. Clarke-Smith) also want the medallion, but nobody will be prepared to face the Ghoul.

Based on a novel and play by Dr. Frank King, "The Ghoul" features a complex plot that goes beyond the norm in horror films set in a dark house. While at first sight, the characters are once again the common collection of stereotypes, everyone has a defined personality and motive to be included in the plot, which twists and turns constantly in a dynamic, unpredictable way that moves with a very fast pace. True, they are still the basic archetypes of this genre of plays (the butler and the lawyer mainly), but the way they all interact with each other in the complicated storyline makes those stereotypes refreshing and quite interesting. The take on the religious confrontations between Morlant and Hartley are of great interest, and Morlant in general is certainly, an unusual villain for its time. Greedy, selfish and downright evil (unlike for example, the villains in Universal Studios horror films), Morlant is still the one who got robbed, and the plot really plays up on the audience's sympathies to make this bad guy the one to root for.

Director T. Hayes Hunter creates a wonderfully dark atmosphere in "The Ghoul", taking full advantage of the talents of cinematographer Günther Krampf and Art Director Alfred Junge, both of them seasoned artists from the years of German Expressionism. "The Ghoul" carries a lot from the Expressionist style, as the lavish sets make Morlant's mansion to become a powerful reflection of its malevolent owner. A director from the days of silent films, T. Hayes Hunter focuses on making a visually stunning movie that allows the wonderful work of Krampf and Junge to shine; nevertheless, despite this focus on the visual he also employs editing and sound in very interesting, even innovative ways (for its time). Certainly, young editors Ian Dalrymple and Ralph Kemplen (his first work) carried out several fresh ideas about editing while working on "The Ghoul". Nevertheless, while technically "The Ghoul" is a brilliantly done movie, certain problems, such as the stagy style that Hayes Hunter employs in his cast, as well as details with the screenplay stain what could really be a flawless work.

The cast is in general good, albeit the there's a general tendency to go over the top, as if it was a play instead of a movie. As Prof. Morlant, Karloff delivers a terrific performance, first as the weakened yet malevolent dying man and later as the resurrected ghoul, the legendary actor is truly at his best. Perhaps there's a bit of overacting that, while often appropriate for the role, at times it's just too much. Unfortunately, Karloff receives limited screen time, and one wonders why is it that he is off the screen for so much time. As his lawyer, Cedric Hardwicke is a nice counterpart, but like Ernest Thesiger, his characters is maybe a bit too simple for him to explore. While his performance is remarkable, Thesiger's role is also a one-note character. As the young couple of heirs, Dorothy Hyson and Anthony Bushell do an effective, albeit unimpressive job. Their problem being having to portray a couple of underwritten characters. In his first role, Ralph Richardson has a very interesting character to play, and he delivers nicely in what would be the beginning of a promising career.

As written above, the screenplay has details that damage what could had been one of the best examples of horror from the 30s. For starters, while there's a lot of care in creating an interesting and complex storyline, the development of characters suffers a bit, and some of them are still just a step above being mere stereotypes. Also, the movie seems to lack a real protagonist, because while interestingly, the sympathies seem to be with the evil Morlant (as everybody is after his treasure), he disappears from the film for the entire second third of the movie, leaving the focus on his heirs. Now, this wouldn't be a problem if Hyson and Bushell's characters had a bit more going for them than just their looks, because while the actors do a good job in those roles, the characters just lack the necessary development. Bushell's Ralph, lacks the charm and comedy a hero of Old Dark House films would need to carry the film, as in the end, despite the obvious references to Universal Studios' style of monsters (mainly "The Mummy"), "The Ghoul" is a Dark House mystery tale, and plays firmly by those rules.

It's kind of a shame that a movie so perfect in technical aspects and with quite a talented cast, could not result in the classic that it should be, but in the end, this is the case of "The Ghoul". While it is a real eye candy and has a story quite bold for its time, the lack of character development truly makes "The Ghoul" a bit difficult to watch without getting a bit bored; as even went the complex plot offers a nice refreshing twist to the Old Dark House mystery films, the lack of interest in the characters (and with the only one with real impact absent during most of the film) proves to be fatal for the movie. Anyways, due to its wonderful achievements in cinematography and art direction (not to mention that it's never bad to watch Karloof and Thesiger together again), T. Hayes Hunter's "The Ghoul" is an interesting film to see, and despite it's problems, I'd still be thankful that the film could be erased from the lists of lost films.

While an enormously influential pioneer on the field of special effects, French director Georges Méliès was oddly not that interested in making color films in his career. The reasons behind this apparent lack of interest were probably related to how costly and laborious was the process of hand-coloring frame by frame, as while his first hand-colored movie was done in 1897 ("L'Hallucination De l'Alchimiste"), he wouldn't attempt to make another one until 1903, when the hand-colored movies done by Edison's Studios became to be as popular as his films. That year, right after the enormous success of his masterpiece, "Le Voyage Dans la Lune" ("A Trip to the Moon"), Méliès directed 3 shorts that he colored himself: "La Guirlande Merveilleuse", "Le Cake-walk infernal" and "Le Chaudron infernal". Of the three, "Le Chaudron infernal" (or "The Infernal Cauldron") is the most well-known, mainly because this film followed Méliès' interest in the horror genre.

"Le Chaudron infernal" (also known as "The Infernal Boiling Pot" by some sources) is a movie about an evil green-skinned Demon (Georges Méliès, of course), who works as an executioner in Hell. Another demon in charge of bringing him the condemned, begins his work by sending a woman to the Executioner, who joyfully ties her and throws her into the big cauldron he has in his room. His assistant brings him another two condemned, this time two male courtiers, who follow the woman to her fate inside the boiling pot. As the bodies enter the cauldron the infernal flames grow bigger and reach an enormous size. After putting the three inside the cauldron, the Demon stirs up the remains and suddenly the smoke that comes from the cauldron begins to form images that resemble the bodies of the condemned. Realizing that this are the souls trying to escape, the Demon will raise the fire from Hell to stop them from escaping.

Among Méliès' many fantasy films, "Le Chaudron infernal" is definitely one of the most impressive of all despite its short runtime, as the addition of color takes the film to a whole new level, making Méliès' many tricks look even more amazing than before. To his usual array of dissolves and camera tricks, Méliès added the effects of drawing over the celluloid (an effect made famous years later by the "Godzilla" films of the 60s), using the hand-coloring technique not only to make the film look nicer, but to make an effect in itself. On a completely different subject, it's interesting to see that in this movie Méliès continues his preference for themes of horror and black magic, as he knows that it's in the horror genre where he'll be able to exploit his special effects to shock and impress his audience.

Being objective, the only problem of "Le Chaudron infernal" is definitely its runtime, as considering that by 1903 Georges Méliès had already done "Le Voyage Dans la Lune", one would think that this film is a bit too short. However, there is a reason for this considerably shorter runtime: it's short because the process of coloring the film was lengthy, and Méliès wasn't able to make longer colored films (and as written above, that's why he only made 7 colored shorts in his career). Despite this problems, "Le Chaudron infernal" is definitely one of the most interesting movies done by the legendary French magician, not only because of its inventive use of color as a special effect, but also because of its place in the history of the horror genre. This movie is definitely pure Cinemagic.