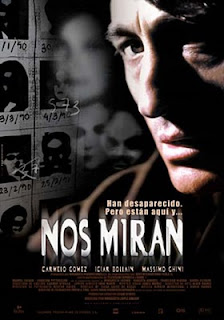 It's been a while since I wrote somehting, and that's quite unfortunate because, while life has taken me to different and ejoyable activities lately, I kin do fmiss writing about cinema. Fortunately, this month I could finish a piece for that cool website that allows me to write from time to time: yes, I'm talking once again about Cult Reviews. On this ocassion I wrote about "Nos Miran" (2002), one of the generation of Spaniard horror films that came during the last decade (and that fortunately, still is alive and kicking). Written by the remarkable Jorge Guerricaechevarria and directed by newcomer Norberto López Amado, Nos Miran" is a mix of horror and film noir about an obessesed detective looking for dissapeared people. Naturally, his dark past comes again to haunt him. Classy and tastefully Gothic in that sober vein that Spain's modern horror handles so well, this is a nice film to watch on a rainy night. You'll find more detail on the review at Cult Reviews of course.