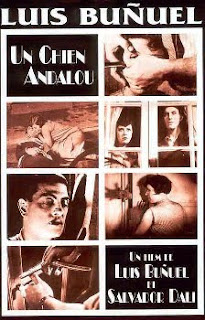 One of the most famous short films in the world is definitely Luis Buñuel's debut, "Un Chien Andalou" (literally, "An Andalusian Dog"), and not without a reason, as this 16 minute film's influence extents beyond the cinema and is considered a milestone of the surrealist movement of the late 20s. After watching Fritz Lang's "Der müde Tod" in 1921), Buñuel became fascinated with cinema, and decided to learn as much as possible about it. He became acquainted with filmmaker Jean Epstein and began to work with him as an assistant in Epstein's "Mauprat", and also looked for work in every production he could. Through this experiences, Buñuel not only learned the technique of filmmaking, but also met some of the cast and crew that would help him in his first experiment. 1929 saw the release of the brainchild of director Luis Buñuel and painter Salvador Dalí, "Un Chien Andalou", which has become an enormously influential work of art, necessary to understand the work of these two masters of surrealist art.

Conceived as a series of scenes without an apparent order, the film has no explicit plot and instead it follows a dream logic where the "dreams" share only actors, characters, themes or motifs, without being explicitly "connected". This logic (or lack of logic) makes the film very much akin to Freudian free association, as while there is no apparent link between the scenes, a subliminal bond exists between them, making "Un Chien Andalou" an visual experiment that expresses the dreams that its creators had. The surreal scenes include the famous scene where a woman's eye is slit by a razor blade, an androgynous woman poking at a severed hand in the street with her cane and ants emerging from a man's hand. It's definitely a pure and raw form of surrealism that attempts to provoke feelings and emotions with its images rather than with its storytelling. It is not that he film lacks any meaning, but that such meaning is expressed in symbols, not with words. It is because of this domain of image and symbology over any traditional plotline that "Un Chien Andalou" has been labeled as a precursor of modern music videos.

Due to its nature, the film depends on the visual impact of its images, and Buñuel manages to make the most of his resources giving the scenes a haunting beauty and a powerful impact to its meaning. It was not only a surrealist statement, "Un Chien Andalou" was also Buñuel's experimenting with film and learning a lot in the process. Cinematographer Albert Duverger, whom first met Buñuel on Epstein's film "Mauprat", employs a quite dynamic technique for its time; and with clever use of lighting, creates an unsettling atmosphere that conveys that aura of mystery and fantasy that exists in dreams. Following the film's dream logic, one could say that Duverger and Buñuel achieve to make the movie flow from dream to nightmare and viceversa. Rich in symbols (that may or may no thave any real meaning) and full of haunting images, "Un Chien Andalou" is certainly one of the movies in which the visuals carry the sense of story in its most extreme form. While unsettling at times and definitely aggressive, the movie is a joy to watch even when the experience is more akin to watch moving canvas rather than a movie the way we are used to it.

The film is hard to understand, and ambiguous enough to the point that probably only Buñuel and Dalí knew exactly what it was supposed to mean. However, that's probably the point of it, to create emotions rather than to simply transmit them. As he states in his autobiography ("My Last Sigh", 1983), the film was made with the intentions that "no idea or image that might lend itself to a rational explanation of any kind would be accepted". In the way that Dalí made his paints, Buñuel crafted his entrance to the artform that would become his life. While one could nitpick the production values of the film (or the acting, which at times is a bit awkward), the whole artistic meaning of "Un Chien Andalou" minimize those problems to the point of making them irrelevant. The whole dreamlike imagery that Buñuel and Dalí have created in this short film trascended the normal way of storytelling, and finished to create the surrealist cinema. It's not a movie easy to like, but it's certainly one impossible to forget,

"Un Chien Andalou" is definitely one of Buñuel's most important films, not only viewing it globally, as a landmark of the surrealist movement; but also on a personal way, as the many things Buñuel himself learned during the process of making it had an enormous influence over his career. While both Buñuel and Dalí feared a bad response from the public, "Un Chien Andlou" became quite popular, and became the beginning of Buñuel's promising career (a career that was unfortunately put temporarily on stand by because of the Spanish Civil War). Original, thought-provoking and enormosuly ambiguous, this short film is a must-see not only for Buñuel fans, but also for everyone interested in film as an art form.