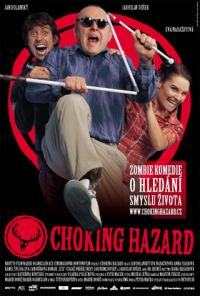 Ever after American filmmaker George A. Romero reinvented the concept of the living dead in the silver screen back in 1968 (with his milestone classic "Night of the Living Dead"), hordes of flesh-eating zombies ravaging the land have become a recurring theme in horror films. The renewed interest in zombie films spawned by Danny Boyle's "28 Days Later..." in 2002 (which despite technicism, works like a zombie film) proved that the zombie subgenre was still more alive than dead, and soon a new generation of horror filmmakers brought more flesh-eating corpses to roam the screens. Czech filmmaker Marek Dobes belongs to this generation of horror directors decided to experiment with the zombie genre, and his 2004 film "Choking Hazard" is his take on the living dead. A comedy-horror in the vein of Edgar Wright's "Shaun of the Dead", Dobes' movie takes a jab at intellectuals by having as characters a group of philosphers trying to find the meaning of life. Certainly zombies know a lot about finding that.

In "Choking Hazard", a group of young people travel to an isolated hotel located deep in the woods, to join famous philosopher Dr. Reinis (Jaroslav Dusek) and take his course about finding the meaning of life. The group consists of nihilist slacker Verner (Jan Dolanský), the naive student Hanusova (Eva Nadazdyova), nymphomaniac Lefnerova (Anna Fialkova), and the course organizers, Nedobyl (Kamil Svedjda) and Krenovcova (Eva Janouskova). After introductions are done and the course begins, the group is joined by Mechura (Roman Izaias), a male porn star who got lost looking for the shooting location of his next film. Interested by the course's goal and seeing it as an opportunity to share his particular set of beliefs, Mechura decides to take the course. However, he is not the only one who will join this disparate group of characters, as a group of zombie woodsmen is on their way to the hotel, and they are hungry. The philosophy course will have to become a crash course in survival when the zombies arrive to the place.

Dobes' regular collaborator, scriptwriter Stepan Kopriva, working together with Martin Pomothy, wrote the screenplay for "Choking Hazard", in which they use as basis the most common plot for zombie filmes (group trapped in isolated location, surrounded by zombies) to conceive a comedy that aims to pokes fun on pseudointellectuals, theme that Dobes and Kopriva had tackled before in their previous short comedy film "Byl jsem mladistvým intelektuálem" ("I was a teenage intellectual"). In "Choking Hazard", Kopriva and Pomothy have built a good set of well-defined characters that, while certainly being based on stereotypes, prove to have a clear identity of their own. The style of comedy is that of ironic satire, with a decidedly preference for the absurd. While the theme of balance between instinct and reason appears constantly through the film, "Choking Hazard" opts for a visceral approach to comedy rather than an intellectual one. This doesn't mean it's stupid, as Kopriva and Pomothy achieve genuinely funny moments in their absurd way.

Using a stylish and pretty dynamic camerawork, director Marek Dobes crafts his film with refreshing creativity and a pretty good eye for the visuals. Cinematographer Martin Preiss makes a terrific job working with digital cinema, and makes great use of his indoors location (exterior night shots aren't that good, being sadly poorly lit). Dobes as well takes good advantage of the digital medium to enhance his visual narrative, and keeps his camera moving all over the place. With an aesthethic inspired by rock music videos and a joyful willingness to experiment, Dobes plays with editing techniques, visual effects and narrative devices that result in a postmodern, self-referential mash-up that enhances the absurd comedy of Kopriva and Pomothy's screenplay. The low production values the film had to work with are unfortunately notorious, particularly in the make-up department, which is really poor. However, the ironic comedy tone employed by Marek Dobes allows to ignore this and most of the rest of the film's technical issues.

In many modern low budget zombie films, acting tends to be pretty average in many cases (as naturally most are newcomers) but fortunately, acting in "Choking Hazard" is above the average of the genre. Leading the cast as nihilistic hero Verner, Jan Dolanský shows the talent and charm that makes an enjoyable protagonist. An all-around slacker constantly annoyed by Dr. Reinis' unstoppable philosophical babble, Verner is not an easy character to like, but Dolanský gives him a vibrant energy that sets him apart. Though the highligh of the film is certainly Jaroslav Dusek, fantastic scene stealer with his deadpan delivery as the blind Dr. Reinis. The rest of the cast is less stellar in their work, resulting in a mixed bag. Kamil Svedjda is somewhat effective as poseur pseudointellectual Nedobyl, but the female cast is pretty weak. With the honorable exception of Eva Janouskova, the women in "Choking Hazard" aren't particularly good (though to be fair, their roles are badly underwritten).

Nevertheless, the film's weakest link isn't any of the female cast, but musician-turned actor Roman Izaias. While having probably the most interesting character in the film (the male porn star with spiritual inclinations), Izaias appears terribly wooden and emotionless in his delivery. Anyhow, "Choking Hazard" may not have the best acting in a zombie film, though this is hardly the film's greatest problem, and taking into account the ansurd style the movie has, it is not really a bad thing. What truly does harm the film is the unfortunately uneven pacing director Marek Dobes gives to his story. Being at times too fast to catch everything, and at others too slow to the point of boredom, Dobes fails to keep his film moving at the proper rhytmn. Another point is his lack of good comedy timing: the ideas are there (and Kopriva writes genuinely funny ideas), but often the effect is killed by the botched delivery of the joke. Czech humor is famous for its use of ironic absurd, though "Choking Hazard" exaggerates a bit in this and comes far too close to ridicule at moments.

"Choking Hazard" is perhaps a mixed bag: a collection of great ideas marred by the shortcomings of inexperience. Perhaps that sounds like the typical justification for many independent horror films, but in this case it's genuinely true: through the film there are sparks of brilliance that show that the team of Dobes and Kopriva had the right mindset when crafting "Choking Hazard". Its absurd humor is perhaps hard to digest at first, but all in all, this Czech effort is indeed a nice comedy-horror entry in the zombie subenre. It is far from being in the levels of "Braindead" or "Shaun of the Dead", but it's a lot better than many similar movies. The team behind this one surely had a blast making it, and it shows.