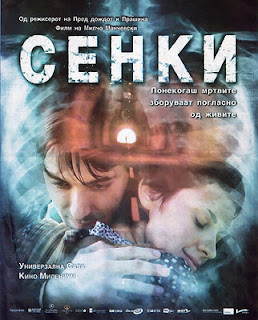 In 1994 Macedonian director Milcho Manchevski debuted with "Before the Rain", a British-French-Macedonian co-production that went on to earn multiple nominations and awards across the globe (including an Academy Award nomination for Best Foreign Language film), and made Machevski to become the most famous Macedonian filmmaker. Seven years later Manchevski returned with the offbeat Western "Dust", and even when it had a much less enthusiast response, cemented Manchevski's career as a director and landed him a job directing a chapter of the popular TV series "The Wire". For his third film, Manchevski returned to more familiar grounds and went back to his homeland, the Republic of Macedonia for inspiration. The result was "сенки" or "Senki", a tale of horror and mystery grounded in Macedonian folklore in which Manchevski attempts a more traditional narrative style, making it perhaps a more accessible job than his previous output. Still, despite "Senki" being a genre-film, Manchevski's style is still present and true to itself.

"Senki" (literally "Shadows") is the story of Dr. Lazar Perkov (Borce Nacev), a young doctor that seems to have everything: a great job at his mother Vera's (Sabina Ajrula) clinic, and a beautiful family with his young wife Gordana (Filareta Atanasova) and their little child. Nevertheless, Lazar lives under the shadow of his domineering mother and at odds with Gordana, whom is dissatisfied with their marriage. One night an angered Lazar leaves home for a night drive when he has a terrible car accident. Miraculously, Lazar survives, and begins to reconstruct his life. He moves to Skopje in order to start again, a decision that bothers Gordana who prefers to remain at their beach house. Alone, Lazar receives strange visits of a mysterious old lady (Joana Popovska) who speaks to him in a strange dialect. Lazar goes to the university to find someone able of translating the words, and finds help in Menka (Vesna Stanojevska), assistant and wife of an etymology professor. But the message hides a dark secret, and Lazar's trip through the shadows is about to begin.

With a screenplay written by director Milcho Manchevski himself, it could be said that "Senki" follows the classic pattern of ghost stories, with Lazar trying to discover exactly why is he being visited by ghosts, and what does he need to do to stop it. Strictly speaking, in terms of storyline there is no new ground here, but a close attachment to the traditional way; however, Manchevski spices this closeness to the classic formula with nice tidbits of Macedonian folklore, a rich set of well defined characters, and quite a puzzling and ambiguous mystery. To put it in another way, Manchevski's originality is in the details rather than in the plot. And in fact, ambiguity could be named as the key element in "Senki", as the intricate plot twists and turns making Lazar's journey more and more confusing with every plot twist. To be fair, Manchevski manages to keep the plot interesting despite this, but unfortunately, it does reach a point where the plot gets a tad too messy and convoluted for its own good.

But, if the story feels typical and formulaic, the work of Manchevski as a director gives "Senki" a very distinctive visual style that sets it apart from other ghost stories. With the beautiful work of veteran Italian cinematographer Fabio Cianchetti, Manchevski captures both the magnificent beauty of Macedonian countryside, and the gritty urban landscape of Skopje. Visually, Manchevski makes the point of having a sharp contrast between the abandoned natural life of the countryside and the nightmarish, overcrowded madness of the city. Interestingly, while resorting to traditional clichés of the genre (jump scares for example), Manchevski's deals with the supernatural forces in a less shocking way, a more lyrical or naturalistic one. Instead of having the ghosts noticeably otherworldly, the spirits in "Senki" walk the world as if they were still part of it, without any great display of special effects. Whether this was a budget limitation or a stylistic choice, the bottom line is that it does give "Senki" with a quite distinctive atmosphere of its own.

While perhaps not the best leading man in a ghost story, actor Borce Nacev makes an efficient job for the most part, capturing nicely the essence of his troubled character. Capturing Lazar's alienation, Nacev carries the film skillfully, though at moments he does seem a tad wooden and stiff. Nevertheless, his work is benefited by the revelation that is actress Vesna Stanojevska, who plays Menka. A classical musician making her acting debut, Vesna shows an enormous natural talent and a great ability to portray her intriguing character. Ambiguous, mysterious, and complex in nature, Menka is perhaps the character that would make or break "Senki", and fortunately, Vesna's performance is truly a wonder. Sabina Arjula, as Lazar's domineering mother is another strong figure in the cast, as she practically steals every scene she is in with her commanding stage presence. Less fortunate is actress Filareta Atanasova, who plays Lazar's wife Gordana, though to be fair, her role is underwritten to the point of being almost a mere caricature of the unfaithful wife.

As written above, "Senki" is not exactly the most original film in horror cinema, and on top of that, its traditional linear narrative may be a surprise to those expecting something akin Manchevki's previous films. Nevertheless, that's far from being a flaw being that Manchevski plays with the formula to make it his own, dressing it with his stylish visual style to give it a different flavor. While formulaic, "Senki" looks and feels unlike most ghost stories, despite being essentially the same tale, and that's perhaps the mark of a skilled storyteller. Now, the true problem in "Senki" is that at times it seems to ramble on for too long, reaching the point of getting a bit tedious. It is one of the cases where the story would had been benefited by some editing. This becomes all the more noticeable as the convoluted plot leaves a couple of loose ends untied, as if there had not been enough work in tightening the screenplay. However, this doesn't diminishes the enjoyment, though it prevents it from being truly great.

Perhaps "Senki" will go on history as one of Manchevski's "lesser films", but as a genre film, it certainly offers a different kind of ghost story that proves that a known formula can receive a breath of fresh air. It's definitely a film that follows that idea of "style over substance", though fortunately, Manchevski's style is a lyrical one that certainly guarantees a visual joy. In the end, "Senki" faces the problem of its audience's expectations: those expecting art-house exoticism may find it too Hollywoodish, while horror fans may see it as too unoriginal and tame for the genre. One should forget these preconceived judgments and enjoy "Senki" for what it is: not a masterpiece, but a ghost story with a different flavor.