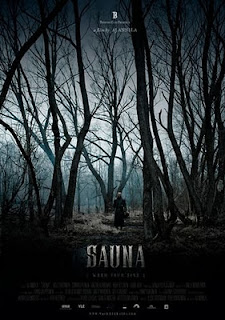 Traditionally, Saunas are specifically the Finnish bathhouses and the traditional baths that take place in them. It is certainly one of Finland's oldest traditions, where the sauna was considered a place not only to cleanse the body, but the mind as well, and even the spirit. It was also a place where Finnish women went to gave birth, and when the dead were washed and prepared for burial. It was more than a refugee from the outside cold of Finland, but basically a holy place where life and death got together and where a spiritual connection could be felt. For the Finnish, saunas became a highly important part of daily life. Many ancient beliefs exist around saunas, most of the related to the spiritual aspect of the bath: the cleansing of the spirit, and the washing of the sins. This ancient tradition serves as the basis for Finnish filmmaker Antti-Jussi Annila's film "Sauna", an atmospheric tale of horror set in the aftermath of the brutal Russo-Swedish war of the 16th century, in which Finland (being part of Sweden) was the battlefield.

"Sauna" is set in 1595, after the war between Russia and Sweden has just concluded and the borders between the two countries have been changed once again, making necessary to chart the new map of the territories nowadays known as Finland. Two brothers, Eerik (Ville Virtanen) and Knut (Tommi Eronen) are part of the Swedish commission assigned to the mission, Eerik as an experienced soldier, and Knut as the main's cartographer. Their relationship isn't exactly amicable, with Eerik feeling disdain of Knut's pacifist views, while at the same time Knut feels uneasy around his ruthless older brother, who keeps a tally of how many people he has killed. Traveling through the devastated Finnish land, the group begins to experience strange events, and the brothers are haunted by the dark sins of their past. Their sanity is put to the test, haunted by the spirit of a girl (Vilhelmiina Virkkunen). Confused and exhausted, the group arrives to a strange village. In the village's sauna, the brothers may be able to wash their sins, but there is a terrible secret hidden in it.

Written by screenwriter Iiro Küttner (who also penned director Annila's feature length debut "Jadesoturi"), "Sauna" is an interesting horror film that takes the concept of guilt as its central theme. Both brothers are guilty, and the guilt affects them in different, yet horrifying ways. The sauna of the title is the catalyst for the horror that will be unleashed on them, as their guilt begins to overpowers them, personified in the figure of the young woman. And yet, both brothers' personalities have been shaped by the war they just lived. Even Knut, whom perhaps wasn't as directly involved as Eerik, has found his life changed by the dehumanizing effects of the brutal war. In "Sauna", not only war is hell, but also leaves its surviving participants in a hellish purgatory. The difficult relationship between the brothers is also an interesting element that Küttner tackles in "Sauna", as both brothers are resentful of each other's different views on the war. In "Sauna", Iiro Knütter has achieved to write a strong low key horror film based almost entirely on character development.

Perhpas the greatest asset of "Sauna" is the ominous atmosphere of dread that director Antti-Jussi Annila conjures for his film. Giving great use to the remarkable work of cinematography done by Henri Blomberg, Annila captures in "Sauna" the strange beauty of violence, in the shape of the desolated Finnish lands ravaged by the war. Desolation is the key word of the film, as the vast cold outskirts of Finland seem to mirror the infinite desolation of the brother's souls. Through the woods and the swamps of Finland, the characters' journey mirrors a trip through a lonely purgatory with hell as final destination. Annila's film moves at a slow pace, but it feels all the more appropriate to discover the hidden secrets of these two characters, which are like two sides of the same coin: the scientist and the warrior, both dehumanized by the war and transformed in different yet similar monsters. In more than a way, their filial hate (which is more than mere rivalry) represent the Finns torn between Russian and Swedish domain.

The film is also benefited by having two great performances in the lead characters, particularly the case of Ville Virtanen as the tired soldier Eerik. Ville truly makes a haunting portrait of the tortured Eerik, whose only skill seems to be to kill people, and who feels tired and obsolete in times of peace. Fully dehumanized by the war, Eerik is a man without purpose, and Ville captures this desolation in a dramatic performance. While the film is seen through his brother's eyes, it is certainly Ville who carries the film with great strength, making him easily one of the highlights of the film. As Eerik's younger brother Knut, Tommi Eronen makes for a nice counterpart, playing the bookish scientist who embodies guilt and confusion as their damnation approaches. While apparently a pacifist, Knut has his own sins to wash, and Eronen manages to showcase the complex feeling of guilt that Knut has. The rest of the cast, while a lot less prominent, are truly up to the challenge and for the most part make a great job.

Highly atmospheric and slow paced, Annila's "Sauna" is not the kind of horror that's based on graphic shock, but instead it aims for a different kind of fear. An unnerving sensation of dread that's more disturbing than downright frightening, yet at the same time ultimately fascinating. Contemplative and even metaphysical, "Sauna" has a somber tone and, while not resorting explicitly to the old Finnish myths, there is an implicit spiritual connection to the supernatural at the heart of this tale of horror and madness. If there's any flaw in "Sauna", it must be that its plot line may get a bit too convoluted and ambiguous for its own good, and it certainly would had been benefited by some more minutes of runtime. Granted, this ambiguity is part of the film's charm, but the climax is a tad too rushed and short to be completely satisfying. However, despite this minor quibbles, "Sauna" is a wonderful journey to the darker sides of the human soul, and an unnerving story about two souls being consumed by guilt.

While sharply different in tone and style to his previous film "Jadesoturi", Annila's second film "Sauna" (alternatively titled "Filth" or "Evil Rising") showcases again the same vibrant originality showed in his debut, yet coupled now with greater maturity and a brilliant sense of aesthetic. Haunting and owner of a strangely captivating beauty, "Sauna" is a powerfully disturbing horror film that, despite not being particularly graphic or shocking, truly captures the horrific, nightmarish images of a soul tortured by guilt. Perhaps "Sauna" is not exactly a masterpiece of horror cinema, but it's a remarkable achievement by its own right and shows that director Antti-Jussi Annila and scriptwriter Iiro Küttner truly make a promising team. This tale of medieval horror is certainly, a beautifully haunting experience.