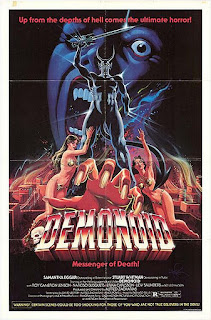 By the early 60s, the Mexican film industry was beginning its slow but constant decline after the Golden Age ended. After a brief resurgence in the early 70s, the country's big financial problems and the stronger competition from foreign industries left the Mexican industry in its darkest hour during the late 70s and early 80s. It is during this difficult period when director Alfredo Zacarías crafted two ambitious horror films starring American actors: 1978's "The Bees" and this film, 1981's "Demonoid: Messenger of Death". Not exactly a newbie in the Mexican film industry, Zacarías began his career as a writer under the guidance of his father, director Miguel Zacarías, and later with legendary director Gilberto Martínez Solares. Soon Alfredo Zacarías started making films on his own and found success directing the light comedies of Gaspar Henaine "Capulina", however, Zacarías had big plans in mind and attempted to enter the American market with horror films. In the case of "Demonoid: Messenger of Death", the outcome wasn't really what was expected.

Also known by its Spanish title as "Macabra, la Mano del Diablo", "Demonoid: the Messenger of Death" stars Samantha Eggar as Jennifer Baines, the young wife of wealthy American entrepreneur Mark Baines (Roy Jenson), who is visiting the mining city of Guanajuato in Mexico as her husband owns an important mine that promises to be very rich. At the time when Jennifer arrives to Guanajuato, Mark is facing the refusal of his workers to go deeper into the mine, as they believe the place is haunted. Thinking it's all mere superstition, Mark and Jennifer decide to enter the mine on their own, and discover that the workers had dug out an ancient altar to the Devil, with the Devil's Hand as a relic. Mark doesn't really take the altar seriously, and grabs the Devil's Hand as a trophy for the triumph of man conquering superstition. However, soon he'll discover that the Devil's hand has a mind of its own and transforms it's owner into a psycho killer. Jennifer will have to escape from the Hand, that keeps possessing people in its attempt to kill her.

While the screenplay is written by Amos Powell (of Roger Corman's "Tower of London" fame) and David Lee Fein (who later would write "Cheerleader Camp"), the film is the brainchild of director Alfredo Zacarías himself, being that he wrote the source story the script was based on. The concept of a transplanted that controls itself is not new (any version of Maurice Renard's novel "Les Mains d'Orlac", like "Mad Love", proves it), but Zacarías adds interesting ideas to the mix, like the demonic possession angle and the transference of the demon from person to person so, unlike his previous work in "The Bees", it could be said that Zacarías succeeds in giving his story some originality. Sadly, the premise gets wasted as the plot lacks the coherency and the sense to put all the elements together and the result is a bizarre story that never really takes off. Ultimately, the plot degenerates into a series of vignettes where the hand goes from host to host, that only have the purpose of being excuses for having many scenes of severed hands.

Alfredo Zacarías' direction is tacky, sloppy, technically effective yet horribly slow and tedious, owner of an unpolished narrative style that feels outdated and unimaginative, as if the movie had been done for television and was 10 years older than its true age. To Zacarías' credit, he makes a couple of really interesting set-pieces for some of the film's goriest moments; however, the unfortunate work of cinematography by Alex Phillips Jr. (far from his best work), together with the notorious low-budget and the contrived and ultimately incoherent plot, end up diminishing the power those scenes could have. While Zacarías had proved to be good at handling with comedy, in "Demonoid: Messenger of Death" there seems to be a great difficulty in handling the dramatic tension and the suspense of the film. The few action sequences of the film are actually well done given the film's low budget, although again, with a somewhat archaic style in the execution. Nevertheless, Zacarías greatest problem arises from his inability to make the awful script work.

"Demonoid: Messenger of Death" has two pretty good actors in its cast, and both deliver some of the worst performances in their careers. To be fair, Samantha Eggar seems like she did her best with what she had to work and manages to carry the film despite the movie's more than obvious problems. The development of her character is almost non-existent, but Eggar at least makes her Jennifer a likable character. Still, her work is far from her delivery in Cronenberg's "The Brood" (1979). The experienced Stuart Whitman is sadly a lot less successful, playing the tortured Priest that tries to help Jennifer against the Devil's Hand. Certainly, his character is a bit more developed, though Whitman's acting is uneven, to the point of changing between different accents though the film without any apparent reason. The rest of the cast ranges from mediocre to downright awful, although it's hard to tell if it's completely the actors' fault given the poor way in which the script is developed.

It would be tempting to put the blame for the many flaws in "Demonoid: Messenger of Death" on the low budget the filmmakers had, or in the cheap looking special effects, or in the inability of the director to translate the story to screen competently; however, the real problem in "Demonoid: Messenger of Death" is the poor way the script was built. Everything else is just an extension of that. Contrived, rushed, and ultimately absurd, the story not only fails at fulfilling the potential of its premise: it never really goes somewhere. While the ideas thrown into the mix definitely look good on paper, the film's poorly developed screenplay contains bizarre scenes that are unintentionally funny at best, and ridiculous at worst. As written above, Alfredo Zacarías' work is good on the technical side (and it's remarkable what he achieved with low production values), but pretty poor in a purely narrative way. Zacarías has done better films when he has a good script to work with, but in "Demonoid: Messenger of Death", the lack of coherency of the plot simply make the film boring and tedious.

"Demonoid: Messenger of Death" is the sad case of an interesting and ambitious idea wasted by an awful story and subpar execution. While released in 1981 (on the wake of the release of Oliver Stone's similarly-themed "The Hand"), Zacarías' film was done a couple of years before, which may explain its relatively outdated visual style. Despite its many flaws, "Demonoid, Messenger of Death" is not without its good things (technically, it's not that bad of a film), though they are certainly overshadowed by its problematic screenplay. It certainly can be entertaining at times (and some absurdities are unintentionally comic), but in the end, "Demonoid: Messenger of Death" results being another good idea that was just badly developed and poorly executed.

Please note that the "Macabra" DVD is the Spanish dubbed version.