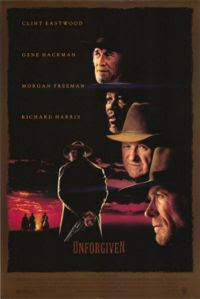 Ford, Hawks, Leone, Peckinpah, all of them big names who have defined the Western genre in one way or another across the history of cinema, transforming what started as low-budget action films into an art itself where the American Old West served as setting for tales of mythical heroism, classic tragedies, and legendary adventures. Actor and Director Clint Eastwood is probably one of the most knowledgeable artists about the Western genre, as his acting career began as the legendary "Man With No Name" in the Sergio Leone's Spaghetti Westerns of the 60s. As a director, he somewhat continued this legacy through movies like "High Plains Drifter" and "Pale Rider", but finally in 1992, Eastwood released what many consider his final ode to the Western, and his ultimate masterpiece of the genre: "Unforgiven", an epic saga that mercilessly deconstruct the Western myths and makes them human.

Clint Eastwood himself plays William Munny, a former gunslinger who is now living a peaceful life as a farmer with his two children. However, life is very difficult for Munny's family, as since the death of his wife the family has been facing financial problems. One day a young man calling himself "The Schofield Kid" (Jaimz Woolvett) appears looking for Munny. The Kid tells Munny about a bounty offered in the town of Big Whisky, and offers him the chance to join him as hired gun and split the reward between them. While Munny's days as a murderer are in the past, he decides to join him after thinking about the farm's problems, but not without calling his old friend Ned Logan (Morgan Freeman) to join them. However, Munny's past as a notorious thief and murderer will return to haunt him in this last mission, as the Kid shows a true and honest admiration for Munny's fame as a gunslinger, even when Munny himself considers his past as villainous.

While better known for his work in science fiction, David Webb Peoples' screenplay proves to be a very accurate description of life in the American west, particularly concerning the aspects of the uses and abuses of violence in that era. It is in fact the use of violence what comes as the main theme of the story, as Munny is escaping from his past's violence while the Kid is eagerly awaiting the next chance to prove his masculinity by the use of violence. The duality between man and myth is explored not only via the relationship between the Kid and Munny, but also in the shape of a character who writes novels about the wild west, and sees the figure of the gunslinger as an idolized modern hero. Peoples' screenplay is remarkably well written, as the many characters and their relationships are exhaustively explored, resulting in a character driven revisionism of the western, that in many ways criticizes the genre's origins as violent "Shoot 'em up" films.

Peoples' script is definitely the movie's backbone, but it is Eastwood's masterful direction what transforms this meditation of violence into a unique revision of the Western. With a gritty and realistic approach very in tone with the script, Eastwood portraits the Wild West without romanticism and leaving out the mythic aspects of the genre, taking the revisionism of the Western one step beyond. Using Peoples' script, Eastwood takes a critic view on the figure of the "hero" in Westerns, focusing on the image of the gunslinger and the use of violence to solve problems. Visually, Eastwood has crafted his most impressive movie since "Bird", with an extensive use of shadows and light in the excellent work of cinematography by Jack N. Green. Eastwood's style, originated by the influence of Sergio Leone and Don Siegel, and developed through many stages seems to finally have spawned its masterpiece in this film.

As William Munny, Clint Eastwood is simply perfect in what at first sight looks like an extension of his earlier "Man with no name" persona. William Munny has a name, and a past he wants to escape from, and Eastwood captures this image of guilt and regret to the letter. One really gets the feeling that all the killings this cowboy has done are constantly haunting them. This is easily one of his best roles ever. Morgan Freeman is also very good as Ned Logan, although like Jaimz Woolvett (who plays The Schofield Kid), gets easily overshadowed by Gene Hackman's powerful performance as Little Bill Daggett. Hackman completely owns every scene he is in, showcasing his enormous talent in a very dramatic role that demands him to be unsympathetic without being exactly "evil". The legendary Richard Harris has a small appearance as another aging gunslinger, English Bob, in very memorable scenes where he demonstrates why he is considered one of the best actors of his generation.

After starting his career playing a mythical hero in Leone's "Dollars" trilogy, it is actually fitting that is Eastwood who explores the figure of hero in his many movies. Ever since his first directed western, Eastwood showed an interest in the duality of the hero in Westerns, as it is often someone who must do bad things for a relatively good cause. Taking a special interest in the archetype of hero portrayed in the classic 1953 Western, "Shane". Eastwood has explored this theme in many ways in the past: first as a truly mean antihero ("High Plains Drifter"), then as a man looking for redemption ("The Outlaw Josey Wales") and later as a true mythic hero ("Pale Rider"); all this culminates in "Unforgiven" as the ultimate demythologization of the concept, and his final ode to the Western genre. While the movie indeed feels a bit "preachy" at times, the story is devised in such a way that it never feels too heavy handed, as it unfolds nicely as a classic epic tale of the West.

Personally, I can't praise this movie enough, as it is easily one of the best Westerns done since Peckinpah's "The Wild Bunch". Visually breathtaking, masterfully directed, and with a solid, complex storyline, I'd even say that this Western is required viewing not only for fans of the genre. Good Westerns (like all good movies) are more than just a set of conventions, they use their setting to state a point, and in this aspect "Unforgiven" doesn't disappoint, as its deconstruction of the hero archetype is simply flawless. While some consider it an "anti-Western", I think that with this movie, Eastwood's name can proudly stand along those of Ford, Hawks, Leone and Peckinpah as a master of the Western. "Unforgiven" is definitely Clint's masterpiece.

I love reading your reviews. I always learn something. My first viewing of Unforgiven made a huge impression on me, and I completely agree with its brilliance. It's a film that has so many nuances that rewatching it always reveals something new.

In your review, I particularly enjoyed your listing of Eastwood's characters in different Westerns and your analysis of how they progressed.