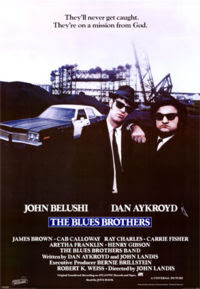 Ever since its initial broadcast, comedy show "Saturday Night Live" has been the launching place for many comedians who use the chance of being in the show as a way to develop their talents and aim for a career on film. As members of the first generation of the show, Dan Aykroyd and John Belushi were among the very first of the cast to make the jump from the show to the film industry. Although the pair had moderate success at first, Belushi became a modern icon of American comedy in 1978 with John Landis' "Animal House". It was after that success when the two friends decided to make a movie about one of the most successful "Saturday Night Live" characters, the pair of R&B singers: "The Blues Brothers". Being his most beloved creation, Aykroyd began to write the full story of the characters, but ended up with over 300 pages of script. It would be again director John Landis who would take the challenge of transforming Aykroyd's script into a realizable movie.

The movie begins with the release from prison of Jake Blues (John Belushi), co-founder and singer of the Blues Brothers band after serving a sentence for robbery. After being picked up by his brother Elwood (Dan Aykroyd), he is informed that the band broke up after his incarceration and that the Blues Brothers are apparently over. However, after discovering that the old Catholic home where they were raised as kids is going to be sold because of its debts, the brothers decide that its their mission, a mission from God, to get the money to save the orphan's house, and that the only way to achieve that goal will be to reform the legendary Blues Brothers band. With this idea the brothers set to find the band's former members, but in their way they'll find new enemies in the form of a Neo-Nazi group, a country band, and a mysterious woman who by some unknown reason wants the two Blues brothers dead.

Written by Aykroyd and Landis, the script is essentially a musical tale that cleverly mixes action and comedy while paying homage to that good old rhythm and blues music that both were so fond of. While Aykroyd's extensive and detailed account of the characters' history has been transformed into a simpler, straight forward plot by Landis, the change is very effective as this way to unfold the story is more in tone with the frank and raw attitude of the brothers. The story is fast paced, as the brothers' tale of redemption is one of high octane energy with powerful musical performances and insane car chases that never make the story boring or tiresome. At its very core, the film's plot is probably simplistic, but making up for the simple plot are the very distinctive and extremely likable personalities of the two main characters, who carry the movie with their charm and a presence that proves that a memorable character is made of more than just a collection of one liners.

In this his fourth movie as a director, John Landis once again demonstrated why he was one of the most promising directors of the early 80s, showing a significant growth in his style of directing comedy that clearly set the basis for his 1981 masterpiece, "An American Werewolf in London". Already a master of the direction of big and complex set pieces, Landis takes this to a new level with the amazing car chases conceived for the film. With a bigger budget than in his three previous efforts, Landis creates an explosive musical that perfectly represents everything that Aykroyd and Belushi conceived as "The Blues Brothers": a celebration of R&B via two characters who really live their music, have that attitude and truly are "soul men". The duo's main trait is the music, and Landis knew this well, so the film is filled not only with the brothers' interpretations of R&B classics, but also the ones by real R&B legends such as Ray Charles, Aretha Franklin and Cab Calloway among others.

As expected, the performances by John Belushi and Dan Aykroyd are of an excellent quality. While less over the top than in "Animal House", Belushi's genius for comedy shines through the film in his energetic role of Jake Blues, who is the one who receives the "mission from God". As the laconic Elwood, Dan Aykroyd delivers the subtler comedy in the movie, and shows a complete domain of his character and a great ability to play the straight man to Belushi's explosive Jake. Together the pair make an excellent team that not only deliver fun comedy but also make an outstanding musical duo. While the Blues brothers are certainly the focus of the story, the vast array of guest stars that appear through the film deliver terrific performances when singing (Ray Charles, James Brown), acting (John Candy, Carrie Fisher) or both (the unforgettable Cab Calloway). The musical performances are simply top notch and make the film a really special experience for music lovers.

As written above, the movie is first and foremost a musical homage to Chicago, so those expecting a spoof, a parody, or a laugh riot comedy will definitely find a different kind of beast. This is not to say that there is no comedy, on the contrary, the movie is filled with a good amount of laughs and clever puns, but the focus of the film remains first and foremost on the music. Still, "The Blues Brothers" is not your typical musical, as its fast pace makes it a thrilling ride like no other movie, and probably the features that most perfectly represents this are the amazing car chases that the stunt team developed for the movie. As in a rocking dance of destruction, the cars crash and smash across the streets of Chicago in some of the most incredible stunts on film. Some have criticized the emphasis put on this scenes, but I think that they fit perfectly in the mood and tone of the film, and basically in the attitude of the brothers themselves.

Without a doubt the Blues brothers are two of the best and most famous characters created by Belushi and Aykroyd, and this movie truly makes them justice (although I find the original cut to be slightly better than the extended one). While not the deepest or most insightful movie ever, "The Blues Brothers" is definitely one of the most entertaining ones, and its magic lays in that frank simplicity that surrounds the movie's story. Still, this simplicity doesn't mean it's a stupid comedy (like the many that are out there) or that it's void film, on the contrary, it's quite an intelligent movie that celebrates Chicago and its music like few others. Raw and direct, "The Blues Brothers" is a movie that truly makes Chicago feel like home, sweet home.