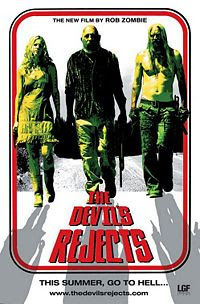 I must admit that when in 1999 rock musician Robert Cummings (better known as Rob Zombie) announced that he would begin the production of a horror film named "House of 1000 Corpses", I wasn't that thrilled about the project. Zombie had already demonstrated a great talent for visual design (creating the whole concept of his band, "White Zombie"), even directing several musical videos o great quality (including the psychedelic dream in "Beavis and Butt-Head Do America"), but even when his dedication to the genre was noticeable, I still wasn't expecting the results he got. "House of 1000 Corpses" was released 4 years after it was first announced, but it truly was worth the wait, as while it wasn't really anything new or original, his hallucinating homage to "The Texas Chain Saw Massacre" was all around a very entertaining film. 2 years later, Zombie went back to his characters, the Firefly family, in a sequel called "The Devil's Rejects", only this time things will be a little bloodier.

"The Devil's Rejects" takes place 6 months after the events depicted in "House of 1000 Corpses", and all begins with a huge police team surrounding the Firefly house with the firm intention of stopping their crimes. Sheriff John Quincy Wydell (William Forsythe) is on charge and he has sworn to stop the Fireflys in revenge for the murder of his brother. A brutal shooting takes place in which Rufus Firefly (Tyler Mane) gets killed and Mother Firefly (Leslie Easterbrook) is captured, while Otis (Bill Moseley) and Baby (Sheri Moon Zombie) manage to escape alive. The two fugitives look for help and call Captain Spaulding (Sid Haig), whom is actually Baby's father and an old friend of the family. Together, the three of them will try to escape the wrath of Sheriff Wydell, to whom rage and hate begin to turn him into someone each time more brutal in his hunt for the Firefly.

Even when "The Devil's Rejects" is a direct sequel to "House of 1000 Corpses", there's a severe change in the tone in which Rob Zombie has written his film this time. If "Corpses" employed a constant degree of black humor in its kitsch homage to 70s cinema, "The Devil's Rejects" takes its homage to the legendary grind-house cinema in a more serious way, following the old school style of violent exploitation to the letter. As a director, Zombie has grown, and while it can't be said that "The Devil's Rejects" is the most original film in the world, his way of telling this brutal story of bullets and blood is quite a nostalgic return to the world of the violent B-movies that filled cinemas and drive-ins in the time of filmmakers like Lewis, Hooper, Fulci o Franco. Actually, the change from surreal black comedy to serious exploitation is really beneficial for the story, because "The Devil's Rejects" feels like a more mature and prepared film.

Still, this change doesn't mean that Zombie has delivered a completely serious dramatic film, as there is humor in "The Devil's Rejects", however, it's of a very black kind, and the tone in general is a lot darker than the one in "Corpses", with the Firefly family at their most violent and a Sheriff Wydell whose acts bring to mind that old quote from Nietzsche: "Whoever battles monsters should take care not to become a monster too" . And yet, "The Devil's Rejects" is not a story of "good people versus evil people" despite what the plot might suggest, as just as director Sam Peckinpah would do (although not as effective, I must say), Zombie shows us the human side of both sides, and in an almost cruel way, makes us to question the sympathy one would have for characters as cruel and inhuman as the Fireflys or Sheriff Wydell, the former with an extreme charm despite their foul acts, and the latter with a very nasty personality despite of the nobility of his cause.

And this is perhaps what is both the strongest and weakest part in "The Devil's Rejects", as while Zombie manages to skillfully manipulate the mixed emotions that his characters provoke, at several times he seems to be deeply enamored with his villains, something that takes him in several times to anti-climatic moments in which, given Otis and Baby's luck, one wonders if to Zombie it is OK to commit atrocities as long as one looks cool while doing them. But even if Zombie made the mistake of getting a bit too carried away in his attempt to humanize his gang of mass murderers, he also must receive credit for the things he got right, and personally I think that one of those is his development of the rest of his characters, (particularly in Capitán Spaulding and Mother Firefly), which in all honesty, is very good and truly shows that Zombie has improved in his skill to create complex (and relatively realist) characters.

Naturally, the acting plays a fundamental role in the result of a film, and for the most part, the cast makes a great job in this case. Sid Haig definitely steals the whole show in his role as Captain Spaulding, creating what surprisingly is the most human character in the movie. William Forsythe is excellent as Sheriff Wydell, but the biggest surprise is Leslie Easterbrook (the unforgettable Debbie Callahan in the "Police Academy" film series) as Mother Firefly, giving the character a power that it wouldn't have if it had been played again by Karen Black. Personally, I can't understand what's of amazing in Sheri Moon Zombie (Rob's wife), as she only does what's necessary to get the job done without anything outstanding, and Moseley is almost on the same situation, although he does deliver great acting in a couple of excellent scenes. By the way, legendary horror icons Ken Foree and Michael Berryman show up in two very funny and bizarre roles.

Even when "The Devil's Rejects" is not exactly a perfect movie, it does result being a very good dose of violent action and horror, old school style, in a way that had not been seen in years in American "mainstream" cinema. As a tribute to the violent psychothrinic film-making of the decade of the seventies, "The Devil's Rejects" is really a lot more than what was expected, and proof that Zombie's success with "Corpses" was not a lucky strike and that maybe he might give us a very good surprise in the time to come.

Hehe, thank you for the shameless promotion.