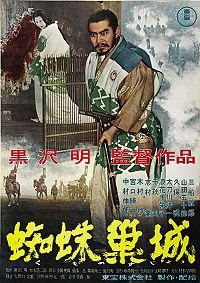 Director Akira Kurosawa, without a doubt Japan's most famous director in the Western world, had an enormous influence from English language's best playwright, William Shakespeare, to the extent of making adaptations of Shakespeare's plays. However, unlike most adaptations of the Bard's works, Kurosawa's versions blended the plots with his many other influences resulting in very original stories that while Shakespearean at heart, were also very Japanese. Movies like "Ran" and "Warui Yatsu Hodo Yoku Nemuru" ("The Bad sleep Well") are examples of the results of this mixtures of influences, where the plot is deeply rooted the play, but with the rich Japanese culture filling the screen. Like those two, "Kumonosu Jô" (known in English as "Throne of Blood"), is technically Kurosawa's very own interpretation of "Macbeth", but like the other examples, it is more than a mere adaptation of Shakespeare's play and actually takes the story to a new level by adding elements of Japanese Noh theater.

"Kumonosu Jô" means literally "Cobweb Castle", and that is the place where two brave generals, Taketori Washizu (Toshirô Mifune) and Yoshiteru Miki (Akira Kubo) are heading to after defeating the enemies of their Lord. In their way to the castle, during a dark foggy night, they meet a mysterious old woman (Chieko Naniwa) who presents herself as a powerful spirit. The spirit foresees their future, revealing them that Washizu will be Lord of "Cobweb castle", and that Miki's son will be his successor, but before that, they'll receive great honors from the Castle's current Lord. After they arrive to Cobweb Castle, the first part of the prophecy fulfills as both are highly honored, and this triggers the ambition of Washizu's wife, Lady Asaji (Isuzu Yamada), who in turn convinces Washizu to betray his Lord in order to fulfill the second part of the prophecy. The ambitious Washizu obeys and soon finds himself Lord of Cobweb castle, but fearful of the unfulfilled final part of the prophecy.

While certainly there is more than a little resemblance to "Macbeth" in the plot, the similarities remain only in the basic plot structure, as the story of "Kumonosu Jô" (Written by Kurosawa and his regular collaborators Shinobu Hashimoto, Ryuzo Kikushima and Hideo Oguni) has more changes than the simply translation from Medieval setting to Feudal Japan; in fact, "Kumonosu Jô" works more like a Noh drama put on screen than as a straight forward Shakespeare adaptation. This is not to say that the immortal theme of uncontrolled ambition is lost in the script, but here it takes a very different approach (with Lady Asaji being far more intelligent and cold blooded than Lady Macbeth), and with the element of fate being of bigger importance due to the setting of the story and the cultural differences.

The elements of Noh theater are more prominent in the visual conception of the movie, as director Akira Kurosawa takes the highly stylized atmosphere of Noh drama and translate it to film. This atmosphere includes not only the slow graceful moves of the characters and the equally slow pace of the movie, but also in the gestures, the music and the overall atmosphere of the film. As always, regular collaborator Asakazu Nakai is in charge of the cinematography of the film, creating this atmosphere of desolation and impeding doom with an excellent use of the forest, the birds and the fog. Using Nakai's beautiful work Kurosawa literally creates poetry with his images, and while far from faithful to Shakespeare, he creates one of the most powerful versions of "Macbeth" ever done. The finale, while appropriately different from the play's ending, is simply a glorious example of both Kurosawa, Nakai and Mifune's work.

No review of "Kumonosu Jô" would be complete without talking about the superb acting by Toshirô Mifune and Isuzu Yamada. As Washizu, Mifune shows his vast range as an actor by playing a considerably different character than his previous samurai warriors. Washizu is a man whose ambition is only equaled by his loyalty to his Lord, so the inner conflict in this character after he is finally convinced to fulfill his destiny is what drives the movie. Mifune is simply excellent in his portrayal of a man whose ambition is driven by fate, and consumed by guilt. However, while Mifune definitely gives one of his best performances in his career, Isuzu Yamada is the one who completely steals the movie as Lady Asaji. Her performance is simply breathtaking and of an almost supernatural quality. She is definitely the highlight of the film and it is not a surprise that this is her most celebrated performance on film.

"Kumonosu Jô", or "Throne of Blood", is a remarkable achievement by Kurosawa, and one of the best Japanese dramas of the 50s. However, its fame as a "Macbeth" adaptation may give the false impression that it's a faithful translation. People expecting an exact Japanese "Macbeth" will be sorely disappointed, as while the stories are similar, the explored themes are a bit too different for purists. In the same vein, fans expecting another samurai epic like "Shichinin no samurai" (done 3 years earlier) will definitely be disappointed as the movie is more drama than samurai action. The Noh drama style of the film may be probably hard to get at first, as its stylish method of storytelling may look a bit too slow to modern audiences. However, once the movie starts it's easy to get used to it and personally, I don't see a better way to tell Washizu's story than this.

In his country, Kurosawa was often criticized for being "too Western" for Japanese audiences after the worldwide success of "Rashômon" and "Shichinin no samurai"; however, "Kumonosu Jô" is an example of Kurosawa making a very Japanese film that despite having its roots in an English play, it's very accurate in its portrait of the Japanese Feudal culture. "Throne of Blood" is definitely a must-see and a remarkable classic.

What a magnificent picture.

Toshiro Mifune was never stronger and this may not be Kurosawa's finest film but it certainly is my favorite of his.

Two scenes in particular stay on my mind - Mifune going batshit insane as the arrows pour like rain [Makes you wonder if Zhang Yimou saw this while making Hero?], and, of course, the "walking trees".

The Criterion DVD is one of those I'd take with me to a deserted island.

It's another quality made film by Akira Kurosawa, an underrated master whose movies are rarely shown on TV. It's not my favorite Kurosawa, but it's very well made.