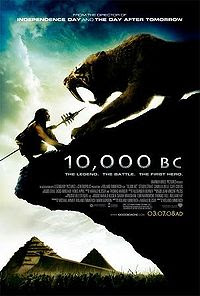 While hardly a filmmaker recognized for great artistry or for making cinema classics, German director Roland Emmerich is certainly someone who really knows how to make a blockbuster. Following the steps of his childhood idols, Steven Spielberg and George Lucas, Emmerich made himself a name as a master of visual effects-laden movies in his natal Germany, and later in the U.S. with films such as "Independence Day" (1996) and "Godzilla" (1998). After making a change of pace to make "The Patriot" in 2000, Emmerich returned to visual effects adventures with 2004's "The Day After Tomorrow" (a tale on the vein of classic disaster movies). Following the same path, Emmerich decided to make another adventure film and take as his new project an idea of his frequent collaborator, composer Harald Kloser: an epic movie set in the prehistoric era. Along Kloser, Emmerich developed the idea into "10,000 BC", a mix of fantasy and history on the vein of films such as "The Clan of the Cave Bear" (1986), or more appropriately, the books of Robert E. Howard.

"10,000 BC" narrates the story of the Yagahl, a tribe of hunters living in a remote mountain range. A young Yahahl hunter, D'Leh (Steven Strait), succeeds in killing a mammoth, winning with this the "White Spear" and the right to marry the love of his life, Evolet (Camilla Belle), a young woman with blue eyes who was found one day orphaned in an abandoned camp. But, since his victory was an accident, D'Leh doesn't feel worthy of this recognition. However, his courage will be put to the test when one night, a gang of horse riders (named by the tribe as the "Four Legged Demons") attack their camp, taking many of them, including Evolet, as slaves. To save them, D'Leh, his mentor Tic'Tic (Cliff Curtis) and his childhood rival Ka'Ren (Mo Zinal) decide to follow the horse riders to their destiny and rescue their people. A young kid, Baku (Nathanael Baring) also follows them against their wishes, decided to help them in their journey, but the trip will be difficult and dangerous, and will take the Yaghal hunters to discover lands beyond their imagination.

As written above, "10,000 BC" is the brainchild of director Emmerich and composer Harald Kloser, a story in which they attempt to bring to basics the hero's journey pattern as described by writer Joseph Campbell: a young man receives the call to adventure, which takes him away from his land to places where he'll have to learn a lot in order to change and succeed in his mission. The basic core of many heroic narratives, this outline serves Emmerich and Kloser as the backbone for their epic fantasy story. And the key word is "fantasy", because "10,000 BC" is anything but historically accurate. In it, the writers have decided to explore the myth of the hero at its most basic, using their own alternate version of history to present a tale of the expansion of agriculture and the creation of the pyramids, all with nods to Plato's Atlantis. While simple, it's really a neat idea, but unfortunately, the writers fail to bring all these ideas together in a coherent script, and while they aim for something deeper than the usual blockbuster fare, they end up with another shallow movie.

Now, director Roland Emmerich can be accused of many things, but setting up poor shows is not one of them, as in "10,000 BC" once again he demonstrates his vision to create spectacular scenes of fantasy for his alternate version of prehistory. Greatly influenced by the work of writer Robert E. Howard, Emmerich conceives a world in which shades of real prehistory form the basis for the vast array of fantastic tribes that inhabit this tale about the supposed dawn of civilization (hunters, warriors, Pygmies, and a fantasy proto-Egyptian culture). In all honesty, Emmerich makes quite a visually rich epic film, and at times he even manages to create thrilling sequences of action and adventure that help to cover up the screenplay's notorious problems. Unfortunately, this time his mastery with special effects seems to not had been on his side, as for a movie based mainly on the impression caused by its visual effects, "10,000 BC" features a mediocre work in this aspect. Also, Emmerich directing of his cast is pretty average, as he seems to prefer his camera to his actors.

As written above, the acting in the film is pretty uneven, but I don't mean it's entirely bad, what I mean is that the cast doesn't seem to be playing their characters on the same line as a team. For starters, a D'Leh, Steven Strait plays the the traditional unlikely hero who becomes a legend, but he acts too "modern" for the story. It wouldn't be bad if only Strait wasn't s bland as he is during most of the film, although this could be blamed to the writers. On the other hand, Cliff Curtis plays D'Leh's mentor Tic'Tic as if he was on a more serious film. I must say that Curtis does make a great job as Tic'Tic, but in contrast with Steven Strait, he feels out of place. If only the rest of the cast was on Curtis' level, the film would had been vastly improved. As Evolet, Camilla Belle is pretty bad, as other than looking impossibly beautiful on screen, her talent seems to be very limited, as she delivers her lines without real confidence. Still, Joel Virgel is probably the most balanced in the cast, as his performance as warrior Nakudu is always in tone with the rest of the film.

However, I think that such details about the characters are not entirely to blame on the actors, but on Emmerich's hand with them and of course, in the way the film was written. This last point is where a lot of the film's flaws fall, in my opinion, as it seems that two general ideas were colliding at the time of developing it: to make it a serious fantasy epic and to make it a simple adventure film (aiming to be a summer blockbuster). I'm not saying that both concepts are mutually exclusive, but I do feel that Emmerich and Kloser failed at reconciling both ideas in one screenplay. But still, while the plot has its flaws (starting from the film's bizarre geography), the concept is pretty interesting, what really damages it is the poor way the characters are conceived. Granted, it's supposed to be the hero's journey taken to basics, but even when the characters are supposed to be stereotypes, some work could be done with them to improve the screenplay. I won't even get into detail about its contrived ending, which definitely is another huge problem in it.

Personally, I must admit that I have a soft spot for Roland Emmerich's films, specially the ones he made in the U.S.. I found "Universal Soldier" (1992) and "Independence Day" (1996) to be good mindless fun, and I honestly consider "Stargate" (1994) to be a flawed masterpiece. I also liked "The Day After Tomorrow" (2004) more than what I probably should, and while "The Patriot" wasn't really my idea of a good film (far from it), actor Jason Isaacs really shone in that one. But despite that, I don't think that I'm biased when thinking that "10,000 BC" has been unfairly maligned and that it isn't as bad as the criticism it has received may indicate. Granted, it's far from the movie it could had been (and that missed potential is probably the film's greatest crime), but while it fails as a serious fantasy epic, I think it's not bad, but simply put, just mediocre.

Wow, Luis, I couldn't disagree with you more strongly on Roland Emmerich. I haven't seen 10,000 B.C.. I suspect I never will, and for very good reason: Emmerich's body of work is a reeking, gangrenous wound on the body of the cinema. His films are like textbooks on everything that is wrong with contemporary Hollywood "blockbuster" films. Worthless and stupid to the point of cretinous, it seems superfluous to harp on the rank awfulness of any given single element of them--singling out things would wrongly suggest there was some merit to be found in the things not explicitly enumerated for critical roasting. It's all day-old fecal matter, slapped together to provide filler for lots and lots of brainless computer animation. Quality big Hollywood movies have virtually ceased to exist because of this kind of rubbish. If Emmerich did what he did in the realm of war, rather than cinema, he'd be dragged before a Nuremberg-style tribunal at the end. His films are atrocities.

If you find any merit in them, I couldn't disagree with you more.

LOL! Could I state it any more strongly? Aim higher, Luis! :)