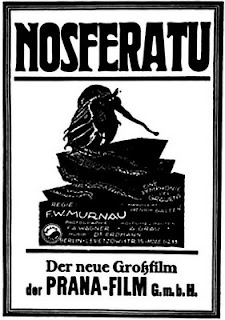 One of the most fascinating creatures of folklore, vampires have had a constant presence in horror legends and stories through centuries. The enormous success of British author Bram Stoker's 1897 novel "Dracula" shaped the myths into one iconic figure that became the classic image of the immortal monster. The following century saw the vampire storming the new medium, cinema, becoming a popular subject in practically every decade in cinema's history. And it all began in 1921, when producers Enrico Dieckmann and Albin Grau got together in order to develop an idea Grau had been imagining since World War I: a vampire film. To achieve this dream, the producers hired famed scriptwriter Henrik Galeen to adapt Stoker's Gothic novel into a screenplay. However, Dieckmann and Grau were unable to get the rights for the novel, so Galeen reworked the story and set it in a fictional German town. Count Dracula became Count Orlok, and with director F. W. Murnau at the helm, "Nosferatu, eine Symphonie des Grauens" (translated as "Nosferatu: A Symphony of Horror") was unleashed.

"Nosferatu, eine Symphonie des Grauens" begins in a German city called Wisborg, where young Thomas Hutter (Gustav von Wangenheim) is an employee at a real state firm. Hutter is sent to Transilvania to visit the enigmatic aristocrat Count Orlok (Max Schreck), who wants to purchase a house in Wisborg and move to Germany. As he gets closer to Orlok's castle, he discovers that the locals are terrified by the mysterious Count, to the point that his driver refuses to take him into the Count's lands. A strange coach is sent by Orlok to pick Hutter, and so the young man finally meets his strange client. At the castle, Hutter only sees the eccentric Orlok by night, and he never sees the Count eating anything, so he begins to suspect that the Count is really the monster known as Nosferatu. One night Orlok admires a portrait of Hutter's wife, Ellen (Greta Schröder) and becomes fascinated with her. After revealing his true nature to Hutter, Nosferatu hurries his trip to Wisborg and takes his reign of terror to Germany.

Already known as a master of dark fantasy (having worked in early expressionist horror films such as "Der Student von Prag" and "Der Golem, wie er in die Welt kam"), writer Henrik Galeen adapts Stoker's classic novel with great talent and literally makes it his own tale. Leaving out the typical Victorian focus on morality of the source (including the vampire hunter Van Helsing), Galeen enhances the Gothic romanticism of the novel by making the story not a fight between the more abstract concepts of good and evil, but an idealized duel between purity and corruption. Corruption is a central theme in the film, with Orlok, the Nosferatu, being not only the plague-bearer whose arrival to Wisborg brings death and disease with him, but also the evil corrupter who plans the destruction of the Hutters' happiness. Stylish, but imbued with a fluid rhythm (inherited perhaps, from the source novel), Galeen's storyline is very agile and dynamic; unfolding itself with an almost poetic pace that makes the story, as its title suggest, a real symphony of horror.

With films such as 1920's "Der Januskopf" ("The Head of Janus") and 1921's "Schloß Vogelöd" ("The Haunted Castle") in his young career, director F. W. Murnau was no stranger to supernatural themes such as those in Galeen's screenplay. Nevertheless, "Nosferatu, eine Symphonie des Grauens" would become one of Murnau's most important films, as along cinematographer Fritz Arno Wagner and producer Albin Grau (who worked as Art director), Murnau developed a very stylish and unique visual look for his vampire film. While essentially an expressionist film, Murnau made choices that were different than the norm, like for example the use of real locations for the movie. This adds a very natural atmosphere that contrasts powerfully with the more expressionist details of the film, such as Nosferatu's striking appearance. This contrast works perfectly with the idea of corruption that's central to the screenplay, as the natural village gets consumed by the extremely stylish nightmare that Nosferatu represents.

In the iconic role of Count Orlok, German actor Max Schreck created one of the most fascinating figures in the history of horror. Thanks to the striking expressionist makeup and his subtle, yet stylish performance, Schreck gives life to a very unique vampire. Animalistic and predatory, his Nosferatu is a real creature of the night, embodying perfectly the idea of horror as both repulsive and captivating at the same time. Trained in theater, Schreck bases his work mainly in body language, creating a nightmarish figure that moves through the screen as if one of the expressionist shadows was alive, filling the screen with a haunting atmosphere when he appears on screen. As Ellen Hutter, Greta Schröder is remarkably good, being almost ethereal in her scenes and the perfect opposite image to Nosferatu's fierce figure. As Knock (equivalent to the novel's Renfield), Alexander Granach steals every scene he is in, as his overacting suits nicely the character he plays. Unfortunately, the same can't be said about Gustav von Wangenheim, whose hammy work is one of the films' downsides.

Filled with unforgettable, haunting images courtesy of cinematographer Fritz Arno Wagner, "Nosferatu, eine Symphonie des Grauens" still stands today not only as a great horror film, but as a marvelous artistic achievement in general. Murnau's heavily atmospheric mix of harsh realism and nightmarish fantasy truly set the standards for Gothic horror, and almost singlehandedly defined the vampire concept in films. Granted, the technological limits of its time are visible, but the fact is that, more than 80 years after its release, the amazing way Galeen, Murnau, Schreck and everyone involved in the production gave life to Stoker's novel in such a powerful and emotional film is truly a monumental work. Unfortunately, producers Enrico Dieckmann and Albin Grau failed to secure the rights to the novel, and the Stoker's state launched a lawsuit against their company, Prana films, forcing them into bankruptcy and forcing them to destroy every copy. "Nosferatu, eine Symphonie des Grauens" was almost lost, but to our good fortune, copies survived in other countries.

Powerful, striking, fascinating, thrilling and in a word, supernatural, "Nosferatu, eine Symphonie des Grauens" went on to became a classic of the horror genre and a movie that has influenced influenced generations of filmmakers for decades. After "Nosferatu", Murnau went on to become one of the most important filmmakers in the world, moving from expressionism to a wide range of artistic styles, finally emigrating to America to direct several masterpieces before the arrival of sound. A legendary film by a legendary filmmaker, what Murnau and his crew achieved in "Nosferatu, eine Symphonie des Grauens" is simply what cinema is supposed to be: magic.

"'Nosferatu, eine Symphonie des Grauens' was almost lost, but to our good fortune, copies survived in other countries."

And practically every copy has at least some footage not in the others, so you discover new things with each viewing taken from a different source.

This really was a great movie, a classic in every sense of the word. Fifty-seven years after it was made, Tobe Hooper converted Mr. Barlow, the Draculaesque neck-chomper in Stephen King's 'SALEM'S LOT into a replica of Count Orlock from NOSFERATU for the film adaptation of that King book. (Hooper's decision may have had more to do with the appearance, that same year, of Werner Herzog's excellent remake of NOSFERATU)

When I owned my video store a few years ago, I discovered that, contrary to popular belief, you can sometimes get people to rent silent films. I did pretty good business with NOSFERATU, mostly because I had the edition scored (and scored rather well) by the music of Type-O Negative.