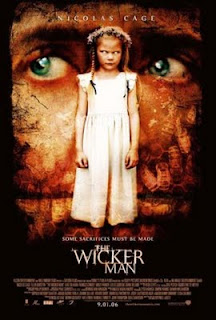 Robin Hardy's 1973 cult film, "The Wicker Man", is definitely one of the most interesting films ever made, and one of the best horror movies in cinema history. Written by Anthony Shaffer, it is a film that through a thrilling story of mystery and suspense, raised interesting questions about faith, philosophy and human psychology. The clashes between extreme ideologies and its disastrous consequences were the main theme of the film, and its eerie atmosphere, ambiguous subject and original score turned the movie into a revered cult classic. To remake a movie like "The Wicker Man" is definitely not an easy task, but certainly a very interesting project to make, as the source offered countless possibilities to explore. Director and writer Neil LaBute, famed for the interesting takes on human nature he makes in his films and plays, seemed like an ideal choice to make a reinvention of a classic, but sadly, I must say that this project ended up as another wasted opportunity.

In this new version, Edward Malus (Nicholas Cage) is a Californian patrolman taking some days off as he is recovering from the shock of a tragic accident on the road. While recovering, Malus receives a letter from his former fianceé Willow (Kate Beahan), telling him that her daughter, Rowan (Erika-Shaye Gair), has disappeared and asking him for help. Confused about Willow contacting him after she left him many years ago, Malus decides to travel to the private island of Summersisle, where Willow lives now, in order to help her find her daughter. In Summersisle, Willow is a member of a community that lives outside of the world, and is dedicated to the production of honey. Right after arriving to the island, Malus begins the investigations, but the population is suspiciously uncooperative and of a very strange behavior. Soon Edward discovers that Rowan is kept hidden in the island and that there is a more complex and bizarre situation going on in Summersile.

Neil LaBute's new take on the original is certainly a bold spin on the themes of the original film: instead of religion and the clash of faith being the main themes, LaBute takes the neo-paganism topic to make extreme sexism the focus of the movie. Under this theme, Summersile is now a matriarchy where females rule and males are oppressed, and the film's "hero" is an unbalanced man with a deep disdain for females. In all fairness, it is an interesting and ambitious spin, and it's clear that LaBute really understood that "The Wicker Man" was more than the tale of a missing kid; however, he fails to develop this subtext through the story and ends up with a very weak background to the core plot, leaving his version of "The Wicker Man" soulless, and just as another typical thriller. While on previous occasions LaBute has successfully pulled off interesting takes on the many forms of sexism, his work on "The Wicker Man" feels really weak, and ultimately disappointing.

Unlike his writing, his direction of the movie is effective and during the first part of the movie, almost matches the original in terms of atmospheric horror and overall eeriness. Sadly, it takes an enormous effort to transform a lousy script into a good movie, and LaBute simply can't make it this time. While the movie moves at a nice pace and showcases a very good work of cinematography (by Paul Sarossy), the problems of the script become quickly too apparent and by the second half the movie becomes a series of scenes that have not logic or serve no purpose. Certainly, LaBute makes some scenes work, and the mystery and suspenses is well handled, but the fact that many scenes lack coherence or are ridiculous, in terms of storyline, make impossible to make something good out of them, no matter how effective technically the director could be. And LaBute is a good director, but the badly developed script finally damages the whole movie and good talent gets wasted with lousy dialogs and silly situations.

Nicholas Cage's performance as Edward Malus is probably one of the worst roles of his career, and not really because his performance is completely bad (it is bad, but to be fair, somethings he strikes the right notes), but because the character is horribly written. Ellen Burstyn is a perfect example of a wasted talent as Sister Summersile, the matriarch of the island and main "antagonist" of the film. Burstyn is a superb actress, and in "The Wicker Man", she delivers her lines with power and dignity, but like Cage, she can't do much to save a script doomed since its conception. Kate Beahan is definitely the worst actress of the cast, making her character look even worse than what it is (an accomplishment in itself, as Willow is one of the worst written ones). Beahan looks wooden and without any expression. Leelee Sobieski appears in a completely unnecessary (and underused) role and perhaps only Molly Parker escapes untainted by the film, although of course, her role isn't really big.

In the end, the debacle of "The Wicker Man" can be summarized in two words: bad scriptwriting. LaBute's idea of using the plot to make sexism as main theme is good and to an extent, quite original, but he betrays the original's spirit (and perhaps, in many ways LaBute's own ideas) by the oversimplification of the characters. While Sister Summersile becomes the embodiment of evil, officer Malus appears as a weak and naive man, taking out the whole clash of believes from the picture in favor of cheap sympathies for the character. With Burstyn's role becoming an exaggerated villain caricature (far from Christipher Lee's complex Lord Summerisle of the original film), and Cage's Malus as a simpleton, the story becomes an overdose of stereotypes. This change proves to be a mistake as Malus victimization becomes a joke that in the end makes the whole finale feel utterly pointless. The many plot holes and silly lines of dialog are just the tip of the iceberg of a doomed screenplay.

Unfortunately, Neil Labute's take on "The Wicker Man" is a horrible disappointment, not only to fans of the original, but also to fans of Neil LaBute, as the movie is nowhere near his previous success and feels as nothing more than a cheaply made for TV thriller. The absolutely ridiculous screenplay ruins what could had been an interesting change to the original's plot, and any bit of interest and intelligence the story could have had, goes down the drain with the atrocious lines the characters have. Personally, I'm not against remakes, as I like to see different versions of a story and there's always the chance to make something really original out of a previously done work; however, this update to "The Wicker Man" is a movie to be left forgotten as soon as possible. True, it's good looking trash, but trash after all.