The wonderful reference book Horror 101: The A-List of Horror Films and Monster Movies 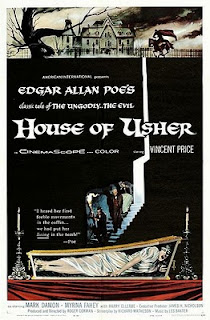 By the end of the decade of the 50s, producer and director Roger Corman had been enjoying a relatively successful career with his many low-budget horror films that filled the drive-ins of the time with memorable titles such as "It Conquered the World" (1956), "Attack of the Crab Monsters " (1957) or "The Wasp Woman" (1959). While not always memorable, his work was effective, cheap and most of the times very entertaining, earning him a ; however, Corman decided that it was time for a change. Instead of making two low-budget black and white films, he decided to make one color feature film with better production values. The result of this risky bet ended up being one of his most successful films and probably among the best horror films ever done: the fantastic adaptation of Edgar Allan Poe's Gothic novel "The Fall of the House of Usher". Titled simply as "House of Usher", this film would begin a series of movies based on Edgar Allan Poe stories, most of them starring legendary actor Vincent Price in roles that would make him a horror icon.

"House of Usher" film tells the story of Philip Winthrop (Mark Damon), a young man from Boston who arrives to the desolate Usher mansion looking for his fiancée Madeline Usher (Myrna Fahey), as she left him in Boston shortly after being affianced with him. Looking for answers, he discovers that both Madeline and her brother Roderick (Vincent Price) seem to be affected by a mysterious malady. While she has become catatonic, Roderick has developed an extreme sensitivity in his audition, making noise extremely painful to him. Roderick explains that this is only the beginning of the ancient Curse of the Usher family, that states that every member of the family will spread evil and suffer from insanity until death. It is because of this belief that Roderick forbids the marriage between Madeline and Philip, as he has decided to end the Usher bloodline and curse once and for all. Philip doesn't believe in Rodericks' words, but in the murky swamps that surround the House of Usher, he'll discover that behind every legend there is a little bit of truth.

Written by Richard Matheson (whom also penned the classic horror novel "I Am legend"), the film does a great work at mixing several of the most representative elements from Poe's short stories in order to create an entertaining and frightening film. While not a strictly faithful adaptation of Edgar Allan Poe's short story, Matheson captures in his screenplay the main Gothic themes of the Poe's writing. The added angle of romance does not undermine the horror atmosphere of dread that the film has, and actually suits well the Gothic tragedy of the Usher clan despite being a tad simplistic. While it could be argued that moving the focus from Roderick to Madeline could betray Poe's intentions, Matheson keeps Roderick an interesting figure on his own right, and not simply a horror villain. Since the plot revolves around the characters, Matheson spends enough time to develop each one of them, slowly setting the stage for the terrific finale where they'll face each other in a superb climax. Although the story takes its time to unfold, the slow pace is rightfully justified by its very rewarding ending.

When one thinks of Roger Corman, its inevitable to think about the many low-budget films of average quality he has done through his long career; however, 5 seconds into the film and one begins to wonder if they are really the same person. This film is so beautifully shot and so carefully crafted that it really shows how much Corman cared for this particular project. While still with a budget considerably lower than the big studios' productions, Corman shows that he actually knows more about the filmmaking craft than just how to save costs, and with real artistry creates a series of set-pieces that are both haunting and attractive at the same time. Seasoned cinematographer Floyd Crosby creates images of great beauty in brilliant widescreen color, making the most out of Daniel Haller's lavish sets without sacrificing the Gothic atmosphere of the story. "House of Usher" perfectly captures the melancholy, the fears and the madness of the short story and creates a frightening Gothic tale of horror in film. It was a risky bet indeed, but one that was worth every cent.

After a long career starring in low-budget films or having mere supporting roles in bigger productions, Vincent Price appears at his finest portraying Roderick Usher with tremendous power, chewing the scene with his great presence and charming personality. His overtly dramatic performance fits perfectly in the movie and it made him a horror icon forever. Certainly his performance could be labeled as overacting, but Price adds a lot of personality to the role of Roderick, giving him a mix of classy subtlety and eccentric antics that enhances the atmosphere of abnormality and madness that surrounds the House of Usher. With this, Price makes Roderick our guide to the insanity. While nowhere as great as Price, Mark Damon and Myrna Fahey make very effective co-stars and actually manage to add a lot to the film. Damon is quite good as the lead character, determined and heroic in his tragic quest; and while Fahey's melodrama is a bit over the top (even more than Price), she puts up a fine performance that's up to the challenge.

Despite its low budget, "House of Usher" has an astounding visual design that definitely proves that Corman was more than just a maker of cheap B-movies. Crossing the line that separates the artisan from the artist, Corman crafts a haunting tale of Gothic horror pretty much in the vein that the British company Hammer began to do in the late 50s. However, there are differences between both styles: Corman's take on Poe (perhaps in part because of its source material) has a greater focus on the surreal imagery of madness than on the wild sensuality of the monster (which is one of the key elements that made Hammer horror to stand out). Essentially, while Hammer focus on the monster, Corman's Poe films focus on the atmosphere of horror and dread. if the film has any taint, I think that it would be the fact that even for the standards of its time, the movie is a bit too slow as it takes its time to present the story. Also, it is definitely not a graphic scare fest, so perhaps someone expecting the opposite may find the film a bit dull or boring.

"House of Usher" is a remarkable Gothic film that relays more in its characters, as well as in the atmosphere and suspense rather than in graphic scares and thrills. A key film in the revival of Gothic horror that took place in the late 50s and early 60s, "House of Usher" showcases a brilliant work of cinematography and one of Vincent Price's finest moments. However, I guess that the most important thing about "House of Usher" is not only that it's a beautifully done film, but the fact that it's probably one of the movies where it's more apparent that filmmaker Roger Corman deserves more credit as an artist than what he usually receives.