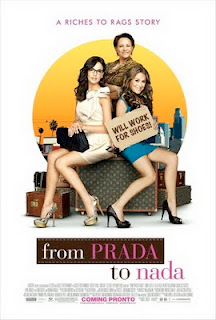 While generally well-received when first published, the works of British author Jane Austen only achieved their well-deserved status as masterpieces of literature until 1869 (more than 50 years after her death), when James Edward Austen-Leigh's book "A Memoir of Jane Austen" was published. The twentieth century saw a greater interest in Austen and her works, becoming important pieces of academic study after proving to be highly influential in English literature. This influence, of course, extended finally to the cinema, the most popular art form in the last century. Since the very first adaptation of "Pride and Prejudice" in 1940, the works of Jane Austen have been the basis for countless adaptations and re-workings, with Austen's themes and characters been translocated to a variety of settings such as a teen comedy in a Beverly Hills High School ("Clueless", 1995) or a Bollywood musical ("Bride and Prejudice, 2004). In 2011s "From Prada to Nada", director Angel Gracia takes Austen's "Sense and Sensibility" to the Latino neighborhood of East L.A.

"From Prada to Nada" tells the story of sisters Nora (Camilla Belle) and Mary Dominguez (Alexa Vega), whom live in a sumptuous mansion in Beverly Hills. One day, their father Gabriel Dominguez (Alexis Ayala) suddenly dies of a heart attack, and the Dominguez sisters discover that everything they have is now the property of their older step-brother Gabriel (Pablo Cruz). Alone and penniless, the girls take the offer of their estranged aunt Aurelia (Adriana Barraza) and move to her house in Boyle Heights, deep in the Mexican heart of East L.A. This change proves to be a shock for both girls, but while the more reasonable Nora takes it with philosophy, Mary refuses to acknowledge her Mexican heritage. In the wake of their new situation, the serious and responsible Nora tries to find a job and discovers love for the first time in young attorney Edward (Nicholas D'Agosto), while her sister Mary will begin to discover her roots when meeting the new teacher's assistant, Rodrigo Fuentes (Kuno Becker), a handsome and rich man who seems like her trip back to Beverly Hills.

Adapted to the screen by Fina Torres, Luis Alfaro, and Craig Fernandez, "From Prada to Nada" attempts to give a refreshing spin on "Sense and Sensibility" by taking the action to the East L.A. and adding the Mexican-American background. Certainly, this was potentially an interesting take on the subject, as it opens the chance to use Austen's novel to make a point in the relations between Mexican and the United States. But unfortunately, while this is certainly touched by the scriptwriters, it all ends up done in a quite superficial and banal manner that ultimately renders the whole Hispanic background as irrelevant. To make things worse, not only the added Hispanic flavor feels superficial, the themes adapted from Jane Austen's "Sense and Sensibility" are worked in an equally shallow manner that it would seem that the only element the writers adapted was the plot line. This results in a sadly inane and vacuous screenplay for "From Prada to Nada", where things just happen in a mechanical, predictable way without any sense or sensibility.

Certainly, the screenplay has problems, but a skilled director could had managed to find a way to make it work. Unfortunately, in his theatrical debut, director Angel Gracia fails to sort the script issues and with a sloppy narrative style pieces together a predictable and mediocre romantic comedy. "From Prada to Nada" is carelessly crafted with a visual style closer to a cheap TV series than to cinema, where the poor work of editing brings out the worst of Héctor Ortega's work of cinematography. Gracia seems to had just filmed the screenplay as it was handed to him, as no attempt seems to be done to build an atmosphere, an emotion or at least, a proper visual narrative. Everything seems to just happen to be captured by the camera in the most mechanical way, following without passion or emotion every single step in the same old recipe for cooking a typical romantic comedy; as if Gracia was more interested in following the formula (checking every typical plot point in the genre) than in crafting his own take on the genre.

Unfortunately, the cast is also a victim of the sloppy storytelling of "From Prada to Nada", as the performances are actually good for the most part. As the Dominguez sisters, Camilla Belle and Alexa Vega showcase their natural talent for comedy, and a great care in building up their characters (specially Vega, whom truly shines). As their aunt, Mexican actress Adriana Barraza oozes charm as their strict but loving estranged aunt. It is a shame that her character seems to be diminished in the final product. Wilmer Valderrama is a real surprise, perfectly transforming himself into a tattooed mechanic in love with the spoiled Mary. His rival is the dashing Rodrigo, played by Kuno Becker with a smooth suaveness that feels quite believable. Nicholas D'Agosto, who plays Nora's love interest, is probably the weakest link, but it's actually not so bad, it's just that his character is so poorly constructed that one wonders if even the actor felt awkward when playing it. Even those in minor roles like Aldonza Vélez and Oliverio Gareli are truly up to the challenge.

It is almost sad to see good performances and a potentially good idea being wasted in such a bland and average product. Perhaps that's what's more frustrating about "From Prada to Nada", the fact that it is not necessarily bad, it's just plain mediocre. There are indeed moments where the idea works, brief sparks of good comedic timing and cuteness where a glimpse of what this could had been comes up to light. And of course, it is impossible to deny that there, deep inside the shallowness, the stereotypes, the superficial caricatures that the characters are, not to mention the bad cinematography and the overall sloppy directing; deep inside all the blandness mediocrity, there is the plot of "Sense and Sensibility", which despite having been transmutated into a romantic comedy formula, it still works, it still shines with that light, warm and familiar, of the genius of "dear aunt Jane". Too bad that the rest of all that is "From Prada to Nada"'s screenplay is plain mediocre at best, and offensively dumb at worst.

In the end, what could had been a nice spin on a classic Jane Austen story, touching the grounds of ethnic heritage, immigration and the relationship between two countries, results in an average, shallow and utterly typical romantic comedy. Predictable to the point of being redundant (even to those not versed on Austen's work), "From Prada to Nada" leaves its Mexican-American background as a mere gimmick and fails to do anything with it other than exploiting the usual clichés and stereotypes. Unfortunately, "From Prada to Nada" brings nothing new to the genre, and remains an unsatisfying movie that even hardcore lovers of romantic comedies will find predictable. Perhaps this kind of movies are worse than those rightfully bad. The bad ones may offer involuntary fun, the mediocre ones offer nada.