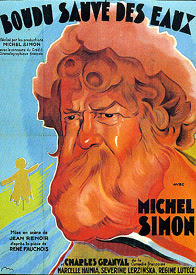 While filmmaker Jean Renoir is usually considered among the most influential French directors of all time, it is common to find that discussions on his work tend to focus around his late 30s work, particularly in his movies "La Grande Illusion", "La Bête Humaine" and "La Règle Du Jeu". This is not really surprising, as those three are arguably Renoir's best films, however, while probably not as outstanding as those three, the rest of his work is of a consistent quality and of great importance for those interested in French cinema. This is specially true for his earlier movies, where Renoir was still developing his own technique and with it the style that would influence French cinema for generations. The 1932 comedy "Boudu Sauvé Des Eaux" is a perfect example of this, as while not really one of Renoir's best films, it is an enjoyable movie that is miles ahead most movies of its time.

"Boudu Sauvé Des Eaux", which literally means "Boudu Saved from the Water" is better known in English as ""Boudu saved from Drowning", as it is the tale of a tramp named Boudu (Michel Simon), who disenchanted with life after he loses his dog, decides to jump into the river Seine hoping to die. But Boudu's plan fails as he is saved by a gentle bookseller named Edouard Lestingois (Charles Granval), who after reviving him decides to "adopt" the tramp in his family, with the hope of making a good gentleman out of the bum. However, Boudu proves to be a difficult case, as with his lack of manners and wild anarchism shakes the lives of those living at Lestingois house, causing a mess everywhere becoming the terror of Lestingoi's wife Emma (Marcelle Hainia) and a source of constant frustration for Edouard Lestingois himself.

Based on a play by René Fauchois, "Boudu Sauvé Des Eaux" was adapted to the screen by Renoir himself and the then-newcomer Albert Valentin, whom certainly took advantage of the different possibilities that cinema offered to expand on the anarchic humor of the play. As one can imagine, the source of most of the movie's comedy lays in the social differences between Boudu and the Lestingoi family, making fun the bourgeois values of French society without mercy and surprisingly, void of any moralist stance. It is a very modern movie in this aspect, as without any pretensions or false sentimentalism (he makes sure of not making Boudu a hero) Renoir makes a poignant social commentary that is as clever as it's funny. The excellent development of his assortment of characters is the icing of the cake in what truly is one of Renoir's best screenplays among his early works.

As written above, in his adaptation of "Boudu Sauvé Des Eaux" director Jean Renoir looked for a more cinematic approach to the play, avoiding the use of sets almost completely and shooting on location as much as possible. This use of natural landscapes and real locations, together with Renoir's smooth and skillful camera-work create a sense of realism that later would become Renoir's trademark. Giving excellent use to Georges Asselin' cinematography, Renoir uses everyplace he can as a stage for his film, literally taking us along with Boudu in his adventure inside the Lestingois house. This wasn't the first time Renoir worked this way, but "Boudu Sauvé Des Eaux" was a further development of this style, a technique that would find its higher point in the three masterpieces he made later on that decade. While not one of his classics, many of Renoir's trademarks can already be seen here.

One of the elements that make "Boudu Sauvé Des Eaux" so enjoyable is definitely the acting, as everyone in the cast is simply excellent. The highlight is of course the legendary Michel Simon, who as Boudu, delivers one of the best and funniest performances in his career. With delightful malice and a good dose of cynicism, Simon makes Boudu a complex character that can go from being the most sympathetic antihero to the most despicable human being in seconds, and always without losing that charm that helps him to carry the film. As the Lestingois couple, Charles Granval and Marcelle Hainia are certainly playing caricatures, however, with extraordinary talent these two actors make the most of their characters, making them more complex and very vivid. Finally, Sévérine Lerczinska makes a terrific scene stealing performance that makes one wonder why did her career on film was so short.

While a harsh critique on the self-righteousness of the French bourgeoisie and the differences between classes (often compared to Chaplin's work), Renoir never intends this to be a moral lesson, as unlike what happens in Chaplin's films, neither Boudu is completely good nor Lestingois is completely bad. Instead of the classic "rich = bad, poor = noble" archetypes, "Boudu Sauvé Des Eaux" shows a very natural balance between both social classes, making fun of the clash of both without sentimentalism and with subtle malice, as if Renoir was stating that neither are exactly good. Even when "Boudu Sauvé Des Eaux" and its style of anarchic humor may look dated now, the movie is still very fun to watch. It isn't a masterpiece of cinema, but still holds up today, more than 70 years after its release.

Lighthearted but clever, "Boudu Sauvé Des Eaux" makes a nice introduction to the work of Jean Renoir as it has many of the elements that would become the basis of his work but under a simpler, friendlier facade. "Boudu Sauvé Des Eaux" may look a bit slow and dated nowadays, but it's still as valid as ever and an excellent example of French comedy of the 30s. A very recommended film.

I saw the film, but I still didn't write a review about it. I think you overrated it a bit by giving it 8/10 - In my opinion, it's more like 6 out of 10. You said it yourself: ""Boudu Sauvé Des Eaux" may look a bit slow and dated nowadays...". And it is. Not that great, but a good film. And not everyone has the same tastes.