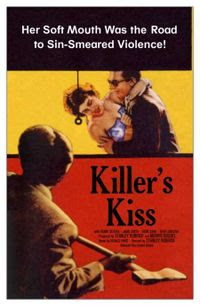 At the relatively young age of 23 years old, a promising photographer named Stanley Kubrick decided to try his luck at making movies after becoming fascinated by the inventive camera-work of Max Ophüls' movies. The young Kubrick had a promising start, as he quickly sold his first two short films (the documentaries "Day of the Fight" and "Flying Padre") to RKO Radio Pictures' newsreel division, a success that made him decide to quit his job at "Look" and become a full-time filmmaker. However, not everything was easy, as the critical and commercial failure of his first theatrical movie, 1953's "Fear and Desire", almost put a halt to the young filmmaker's career. After this failure, Kubrick decided not to give up and spent the following two years saving money in order to make another movie: "Killer's Kiss", the movie that would pave the way for Kubrick's future masterpieces.

"Killer's Kiss" is the story of Davey Gordon (Jamie Smith), a 29 years old boxer living in New York at the apparent end of his career. After losing another fight against a younger and better opponent, Gordon contemplates to retire and return to his uncle's farm in Seattle to work. However, everything changes when he notices that Gloria Price (Irene Kane), the young lady who lives next to his apartment, is being attacked by a man named Vincent Rapallo (Frank Silver). Gordon quickly intervenes and manages to scare Rapallo away, and this event makes him meet Gloria and discover her life. He finds out that she is a dancer, and that Rapallo is her employer, a violent man that owns the dance hall where she works. While Gordon is quickly falling in love with Gloria, Mr. Rapallo is planning his vengeance, as he is not willing to let Gloria run away from his hands.

With a screenplay written by Howard Sackler (who also helped Kubrick in "Fear and Desire"), "Killer's Kiss" was based on an original story by Stanley Kubrick himself (something he would never do again) that in many ways seems to reflect Kubrick's vision of New York in those years. Essentially a crime film deeply rooted in the film noir genre, "Killer's Kiss" deals with Gordon's adventure through the dark side of New York and his gazing into the morbid world of low-life gangsters. It's certainly a very simple story, and while the quality of the dialogs ain't really amazing, Kubrick and Sackler manage to add nice twists to the plot, a good dose of suspense, and specially, an interesting development of the characters and their relationships. They all seem very human and realistic, which together with the dark and gritty world they inhabit enhances the realism of his story.

While the story may not be of the quality Kubrick would achieve later in his career, visually "Killer's Kiss" is a joy. With a superb work of cinematography, Kubrick captures New York city at its darkest with a raw and gritty style that fits perfectly the tone of the film. His mix of light and shadows in the noir style is remarkable, and adds a lot of atmosphere to the movie. Taking a realist approach to the story, Kubrick seems to give a good use to everything he learned by making documentaries (the fight scene brings back memories from his first short, "Day of the Fight"), and it is in fact his dynamic camera-work what makes the movie special. Finally, the music by Gerald Fried (who also started his career in Kubrick's first short) is another of the highlights of "Killer's Kiss", subtly adding a morbid and somber tone to the movie's images.

Well, the acting is not exactly good, as with the exception of Frank Silvera and Jamie Smith, nobody in the cast was a professional actor at the time of making "Killer's Kiss". As boxer Davy Gordon, Smith is actually good and is very convincing as a fighter whose better days are in the past. While his character is a tough guy, Smith manages to give him an everyman look, making really easy to sympathize with him. Like Smith, Frank Silvera is also good in the role of Mr. Rapallo, the sinister owner of the dance hall, although at times he is not as convincing as Smith. However, Kubrick's screenplay makes Rapallo more human than the villain caricature that it could had been, and Silvera truly takes good advantage of that. It is Irene Kane as Gloria Price where the movie fails, as she seems unable to do with her character something more than looking great on film.

Sadly, the rest of the cast is actually worse, with the probable exception of Jerry Jarret, a non-professional actor who is very convincing as Gordon's manager. The bad quality of the acting truly diminishes the power of the writers' script, as while the dialogs aren't exactly good, the bad acting makes them sound even worse. Still, Kubrick's visual poetry is what makes the movie to stand out among the rest as despite its flaws it shows that the young photographer who made it was truly a promising talent. Shot in areas near the apartment where Kubrick lived on those years, "Killer's Kiss" is like an oddly attractive postcard of those sides of New York where nobody would like to get lost, as Kubrick makes this dark and gritty story a haunting portrait of his city showing its best and its worst faces at the same time.

While at first sight it may seem that the movie is important only because a young Stanley Kubrick made it, "Killer's Kiss" really has some interesting elements on its favor. Kubrick's powerful cinematography and skill as a storyteller are already displayed here, as well as his skillful use of music to add atmosphere to the scenes. While certainly weak in some aspects, "Killer's Kiss" is an excellent film noir that most importantly, would attract producers for Kubrick's first masterpiece: 1956's "The Killing".