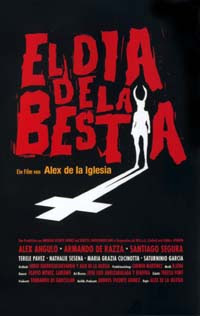 Just as it happened in the film industries of many European countries, the horror genre in Spain had a slow and difficult development until the 60s, when people like Narciso Ibanez Serrador and Amando de Ossorio added a Spaniard flavor to the Eurohorror of those years. However, Spaniard horror lost steam as the 70s ended and by the 80s it was again in a deep slumber in which only cult figures like Jess Franco and Paul Naschy kept truly working within the genre. Fortunately, the 90s brought an entirely new generation of young filmmakers who, having grown up with the films of that golden age, started to create a new series of horror films for the modern reality of Spain. Among this new generation was Álex de la Iglesia, a former comic book illustrator who seduced by cinema, took Spain by surprise in 1991 with his short film, “Mirindas Asesinas”, and with his second feature film, “El Día de la Bestia”, proved that Spaniard horror is finally back.

In “El Día de la Bestia” (literally, “The Day of the Beast”), Alex Angulo plays Father Ángel, a priest who in his work as a scholar of Theology, seems to have discovered the real message hidden in the book of Revelations: the exact date and the location where the Antichrist is going to be born. Father Ángel is sure that the son of Satan will come to the world in Madrid on the Christmas Eve of 1995, so all he needs to kill the diabolic baby is the exact location of his birth. To do this, he decides to travel to Madrid, hoping to be able of becoming a Satanist in order to discover the place where the Antichrist will be born. However, finding the Satanists proves to be a very difficult mission, specially without an idea of where to look at, so Father Ángel recruits metalhead José María (Santiago Segura) and TV psychic Professor Cavan (Armando De Razza) to aid him in his quest to kill the baby before it’s too late.

Like practically every film by De la Iglesia, “El Día de la Bestia” was written by him in collaboration with Jorge Guerricaechevarría, the writer who has been De la Iglesia’s right hand since the beginning of their careers. “El Día de la Bestia” mixes remarkably comedy with horror by adding a considerable amount of dark humor to the story without falling in common devices like parody or spoof. It is not exactly the kind of comedy that results in big laughs, but one that leaves a malicious smile of complicity due to its irreverent darkness. While “El Día de la Bestia” is mostly a black comedy, the writers do not forget that it’s also a horror film, and so themes such as the violence of the end times and the character’s feeling of impotence against an imminent apocalypse are very well used. It’s an excellent mixture of genres that certainly gets benefited by the great development of the characters and its clever use of irony.

In “El Día de la Bestia”, director Alex de la Iglesia shows that his earlier work wasn’t the result of an amateur’s lucky strike, and that he has real talent behind the camera. With frenetic rhythm and a wonderfully dark apocalyptic atmosphere, Alex de la Iglesia makes his dark tale come to life in a spectacular fashion. Giving an excellent use to Flavio Martínez Labiano’s cinematography, De la Iglesia captures the essence of the story in the bizarre beauty of the contrast between the colorful happiness of Christmas and the gritty urban violence of Madrid’s streets. Despite the low budget, the special effects look pretty good, and thanks to De la Iglesia’s great camera-work and good eye for visuals, the whole movie has the visual look of a comic book without falling in the typical silliness that tends to surround this kind of style.

Not only the writer and the director did an excellent job in the film, the cast deserves a lot of credit for the movie’s high quality. As Father Ángel, Alex Angulo is simply exceptional, carrying the film without problems thanks to his natural talent for black comedy and skill to make a very likeable character. Santiago Segura is also very good as José María, very believable in his role as the junkie metalhead willing to aid Father Ángel in his mission. However, the highlight of the film is Italian actor Armando De Razza’s perfomance as Professor Cavan, as he manages to steal every scene he is in as the hilariously skeptical TV psychic. In the supporting roles there are also excellent performances, specially Maria Grazia Cucinotta as the dumb blonde who dates Professor Cavan. Terele Pávez and Nathalie Seseña are also very good in their roles.

The mix of comedy and horror is definitely quite popular among modern directors, but often the results of such mixture of genres are sadly disappointing no matter how good the intentions or the ideas behind them are. Fortunately, “El Día de la Bestia” is an exception to this, as it moves gracefully between genres (no doubt due to its preference of smart black comedy over cheap slapstick), staying true to its roots while at the same time exploring new grounds with a witty sense of irony that makes it a breath of fresh air. Delightfully irreverent and very well-crafted, this twisted modern version of the Biblical story about the Three Wise Men is definitely a nice addition to the genre as it was only the beginning of the new generation of Spaniard horror films.

Often overlooked as a mere comedy, “El Día de la Bestia” is an excellent movie that can stand proudly as one of the best (or maybe THE best) horror movies that Spain has given to the world in a long, long time. After a troubled yet very promising debut with “Acción Mutante”, director Álex De la Iglesia proved here that his success wasn’t a lucky strike, and that he had a lot to offer to the new Spaniard cinema and the horror genre in general.