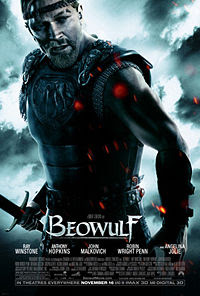 Ever since the year of 1995 saw the release of Pixar's "Toy Story, the first computer-animated feature film, a whole new way of creating animated movies was born, as while computers were already used in traditionally animated films, now they could be used to create animated feature length films. And just like traditional animation has developed several techniques (like Rotoscoping), 3D animation also developed its own styles, like photorealism, which attempts to mimic real life employing techniques such as motion capture. Director Robert Zemeckis has been working with this style for a while, with his first animated film being 2004's "The Polar Express", which showed the potential of motion capture. His next animated feature was also based on the motion capture technique, but this time he used it to recreate England's oldest epic narration: the Norse legend of "Beowulf".

Following closely the epic poem, the movie chronicles the story of how a monster named Grendel (Crispin Glover) terrorized the famous mead hall Heorot, slaughtering the people of danish King Hrothgar (Anthony Hokins) and bringing death to his lands. Hearing of the problems at Heorot, a Geatish hero named Beowulf (Ray Winstone) arrives to Hrothgar's mead hall with his men, claiming to be the world's greatest hero and the only one able to kill the monster. King Hrothgar decides to give Beowulf and his men a chance to prove their courage and allows them to battle Grendel, however, this fight will prove to be decisive in Beowulf's life, as not only he'll face a monster beyond his imagination, he'll also be forced to confront his inner demons when he meets Grendel's mother (Angelina Jolie), and to make things worse, he'll fall in love with the King's beautiful wife, Wealthow (Robin Wright Penn).

As written above, "Beowulf" follows the Old English poem quite faithfully, in the sense that it covers all the major battles and challenges that Beowulf faced. However, writers Neil Gaiman and Roger Avary use the poem's outline to add a back-story that ties all the poem's events, and at the same time explores the theme of the difference between man and myth in heroic tales. This adds an interesting complexity to the poem's characters (which are more archetypes than real persons), as while we do watch Beowulf as the mythic heroic warrior the poem talks about, we also see him as man whose greatest wish is to be remembered as a hero, and often falls in the temptation of exaggerating his feats. It's a take that many purists of the poem may dislike, but personally I found the script to be the strongest part of the film. The touch of sly humor is also another welcomed surprise in the screenplay.

Director Robert Zemeckis makes a good job at making the Norse legend come to life again in animated form, recreating in a very detailed way the atmosphere of myth and magic that the epic tale conveys. While Gaiman and Avery's script takes some liberties with the original story, Zemeckis makes sure to keep that sense of thrill and adventure that has made "Beowulf" to be a captivating story for over a thousand years. The technology employed in the film is definitely a big improvement over the work done in "The Polar Express", and it wouldn't be an exaggeration to call "Beowulf" the best motion capture film ever done so far, however, Zemeckis' decision to use an extreme photorealism in the design (to the point that some actors look exactly as their real counterparts) isn't really as fortunate, as the closer the characters look to real life, the easier it gets to to spot flaws in them.

Now, this is not really a problem of the cast, as while they aren't all excellent, for the most part they all make an efficient job in their roles. As the heroic and proud Beowulf, Ray Winstone is very good and makes a very human portrait of the mythic warrior, taking advantage of the fact that the script has humanized his character a bit. As his best friend Wiglaf, Brendan Gleeson shines despite the small size of his role, and he gets some of the best lines in the film. Anthony Hopkins is good as Hrothgar, but nothing really surprising, and the same could be said of Robin Wright Penn as Wealthow. However, Crispin Glover steals the show as Grendel, as he manages to deliver a poignant performance behind the his computer generated facade. Angelina Jolie is also very good in her role, although her accent wasn't really the most appropriate.

With a very good cast, the best technology for computer animation and on top of that a solid script, one would think that "Beowulf" could be a flawless example of animated art, but sadly, something just doesn't work completely. The problem, in my opinion, is that once again Zemeckis seems to be too enamored of his technology, and in his choice of making an extremely realist animated version, he has put the animation's flaws on display to everyone. What I mean is that this search for realism brings to the spotlight a major problem: the quality of the animation doesn't look constant, as while some characters do look amazingly like the actors that play them (Grendel's mother being the most notorious), others look extremely fake (Wiglaf and Hrothgar for example), so the contrast between them is glaringly obvious, and that's really bad.

And this leads to another problem, or more precisely, a question: if Zemeckis wanted such an extreme photorealism in his film, why not use real actors to do it? But despite this, "Beowulf" is not only an interesting experiment, if one gets over the idea that it's an animated film, one will find that behind the flashy graphics there's a powerful story, a story that has been thrilling our imagination for centuries. And still can do that and more.

Oy, thanks for the link, and sorry I can't quite understand Spanish, or can only follow with difficulty.

I'd like to point out a minor glitch: the story of Beowulf is very different from what Gaiman wrote and put on the big screen.

Otherwise, I agree with you, completely. If anything, I think Zemeckis' best works are his more heartless ones, and that when he goes for sentiment and profundity, that's when he slips on a big banana peel.